How to enhance wireless signal on 3rd floor?

The device you are looking for is a Wireless Access Point. It usually has one more more antenna's (which may be internal) and one or more wired network connector.

These devices are getting rarer though. Most of the time people want a modem, a routes and a wireless access point. It is cheaper to build a single device which can do all three functions than to build three separate devices.

Still, as long as you can turn off unneeded functionality even such a complex device will do. Your wireless extenders might actually be quite close to the desired functionality. As long as they allow the right settings they will work fine as a W.A.P. Just connect one port to the regular wired access point (which you described as ethernet plates) and configure it properly. (e.g. no DHCP on these. If using 2.4GH then preferable on different bands then the wireless in the cellar etc.)

If you have a device with antenna's then look at the diagram below. You see that I drew the wireless signal as orthogonal to the antennas. Orientating these in the right way might help a lot to get a better connection on different floors (at the cost of signal strength on the floor the device is on). 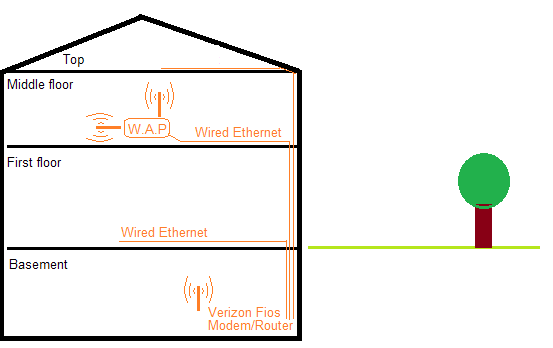 Not the answer you're looking for? Browse other questions tagged wireless-networking cat5e or ask your own question.

4
How can I extend my wifi coverage?
4
Cascading the Dlink DIR-601 wireless router?
2
Boosting poor wireless signal indoors
1
How to extend wireless signal
0
Connect 2 Routers Wirelessly
0
Verizon Fios Wireless router and ethernet outlets in various rooms of the house
2
Can a router plus access points do what a mesh network does?
0
tp link WA801ND wireless operation mode
0
Can't ping computers on local network over wifi on Windows, but can with Mac
1
Extend wireless via Ethernet