Get rid of “Resource Busy” message on Mac OS X

I also tried running sudo gpt /dev/(r)disk(1-3). Interestingly enough, the I only get a result from /dev/rdisk3:

Here's a list of all of the disks connected to the computer, found by running sudo DiskUtil list: 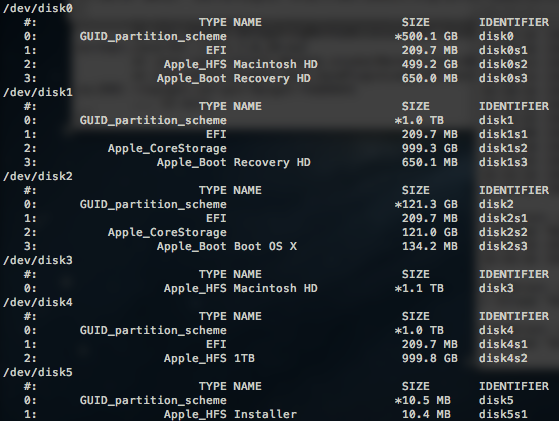 /dev/disk0 - The disk of the computer that the iMac is connected to.

/dev/disk3 - I don't know what this is. I would assume it is the combined HDD and SSD of the iMac.

/dev/disk5 - I have no clue what this is either. Maybe utilities for /dev/disk4?

The iMac has a fusion drive, and /dev/disk1 is the HDD. I've tried with the SSD, /dev/disk2, but I get the same result.

I have the iMac plugged into another computer via thunderbolt, and by holding t when the iMac started up, the Macintosh HD showed up as an external device on the other computer.

How could I get rid of this message? I've tried restarting both the iMac and the computer that it is connected to.

First off, the pdisk command is used to modify drives that are partitioned using an Apple Partition Map. Only PowerPC-based Macs use those.

Secondly, your umount commands above are failing because /dev/disk1 and /dev/disk2 are not mounted. Typically only partitions are mounted (e.g. /dev/disk0s3), although in your case, you have a Fusion Drive. You are absolutely correct that /dev/disk3 is not a 'real' disk. It is the combined capacity of /dev/disk1s2 and /dev/disk2s2. If you type umount /dev/disk3, that should work. Of course, nothing is mounted on /dev/disk1 or /dev/disk2, so you will have to issue a diskutil unmountdisk /dev/diskN for those. That should free them up so the gpt command will stop giving you the resource busy error.

Fusion Drives use Apple CoreStorage partitions as containers, which is sort of analogous to Microsoft's Dynamic Disks. Unfortunately, they make manipulating the partitions more difficult, and take many disk/partition recovery products off the table.

However, aside from the issues above, I'm not exactly sure what the problem is. You mention that the partition table is lost, but the output from diskutil list suggests your partition tables seem to be OK.

Can you elaborate a little more about the problem you were having?

try this: diskutil unmountDisk force /dev/disk0 (or whatever your disk is)

I had a similar issue to the OP so I thought I would share what I found. My scenario was different in that;

1) I had bought a brand new Sandisk 32GB USB Stick which I needed to use on a different unix distro later. The USB came pre-formatted as they usually do, with the FAT filesystem and some files for backup etc

2) I only have a Macbook Pro (MacOS 10.14.4) to hand, but I needed to format the stick to ext2 which is not as straight forward as you might like.

When plugging in my new USB stick, I was indeed met with the following;

Running e2fsprogs to format the USB stick resulted in the following;

What I needed to do was unmount the FAT partition from the Mac so that I could format it in ext2 as required;

Then run the original e2fsprogs command to format the USB disk.

Not the answer you're looking for? Browse other questions tagged macos unix partition-recovery file-recovery or ask your own question.

0
Get Rid of Error Message
4
Can't access external harddrive in OSX
11
Mac OS X This Disk doesn't use the GUID partition Scheme when upgrading to Mac OS Sierra
0
MacOs says external ssd disk is not readable, unable to repair it