Hard Faults with 12GB of RAM on Windows 7

I am a total newbie in matter of hardware.

In order to increase the performance of my laptop (Asus ROG G75VW) for multitasking (I had only 4GB and Android Studio, Genymotion, Firefox, etc. were too much), I bought 8GB extra RAM.

I read on the web here and here that hard fault are generally due to a lack of physical memory, and that increasing RAM should lower hard faults.

The key thing to pay attention to is the Hard Faults/sec graph, which tells you how many times an application attempted to read memory that Windows was forced to push into the pagefile because of a lack of memory.

So I was not expecting to see again hard faults, but when I open the ressource monitor, I see something like this : 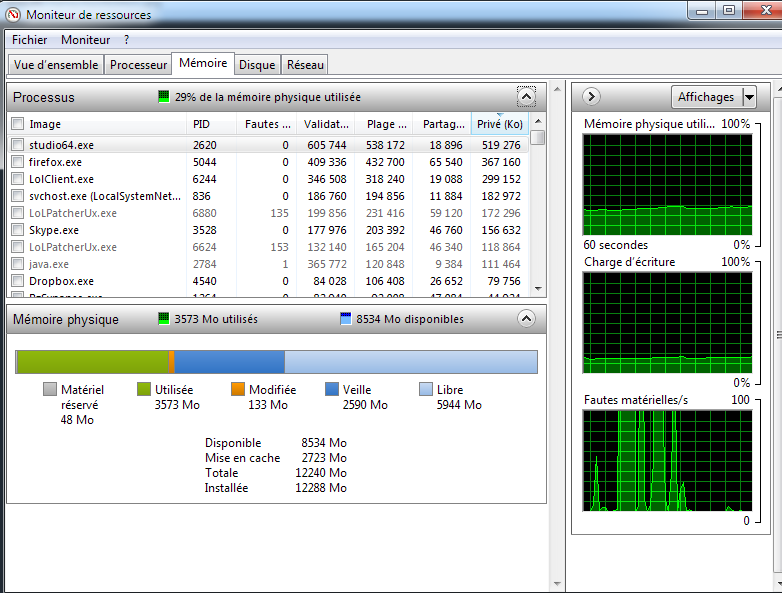 Could you enlighten me about this? Is this a problem with my initial RAM, is this perfectly normal?

Hard faults are caused when information that has been requested (like trying to open up programs for the first time) is not stored in memory. Because it isn't in memory, the computer has to look into your hard drive to find the information. In your screenshot, you have about 8 gigabytes available, and 5 of that is completely free.

Before you upgraded your memory, you might have experienced the hard faults because there was no more free memory, so "Windows was forced to push into the pagefile". You are now experiencing hard faults because you are opening programs for the first time. This is in fact, normal.

It is obvious from your screen capture that you are not out of memory.

One thing that can cause hard faults is a memory-mapped file. This is a technique that allows for editing a file via direct memory access and is especially useful for editing very large files.

I note that the program(s) causing these faults in your screen capture is a LoL (League of Legends?) patcher program and was probably accessing very large game archives.

Not the answer you're looking for? Browse other questions tagged windows-7 memory or ask your own question.

2
When is swap memory useful? Why do we need to set it to twice the amount of RAM?