-- 2020 update -- This is a subquestion of a bigger problem I had throughout the years: how to efficiently manage many Chrome windows & tabs?. I'll post another separate question soon to try and adress this, and will link to it here.

Typically I use about 10 different browser windows (always on). I'd like to have a way to set "sticky" window names so that I can locate one I'm looking for quickly when switching (using keyboard shortcut or from the drop down window menu).

Because now, Chrome displays the current window title (of the given web page) which is obviously ever changing, depending on that window's currently active tab. I just found a "hack", a bookmarklet with which I can assign a custom name to the current tab. But then it breaks if I change the active tab in that window and forget to set it back. So I'd like a better solution (an extension I guess, but haven't found so far). Or perhaps some kind of visual hint (to customize that window's border color, etc), so in essence a way to customize the current window, although then that's perhaps less obvious than changing the title directly.

Here's some additional info, I switched back to windows and still trying to tailor that perfect browser experience ;-)

Chrome(chromium) finally let you give each window a separated and fixed name.

I prefer this than tab group feature

This answer was mostly Mac related, I don't think it's much worth the trouble today (SSB or multiple independant browser instances / clones). There are simpler workarounds. Some ideas:

Each have their pros, cons and perhaps deserve a better review than just this 'name dropping'. I'll try to do that when I get a chance, perhaps as a new question since this regroups a bunch of concerns together to improve the many windows & tabs management.

The solution I used to make chrome-based SSBs is called epichrome. On windows there must be equivalents for sure... I have about 5 different SSBs running all the time, along with chrome. Works great! On extension I added in the mix to most of my SSBs is Great Suspender, which automatically suspends tabs when inactive (customizable). So inactive SSBs' resources get freed even when I probably have 30-40 tabs open at all times permanently.

Ok I've found a way to make SSBs (single site browsers) with Chrome so I essentially now have a few apps for those "sticky" sites I use often (mail, maps, drive, etc). This allows them to behave like normal apps so I can give them a custom name, icon and can switch easily back and forth between opened windows. Not only that, it's possible to create some custom URL rules, for example always open all links starting with maps.google.com in Maps SSB, etc... Hence it's still a big hack overall, but it feels like the best solution. Still it becomes a bit more work then as each SSB essentially becomes another browser instance, with it's own favorites, extensions, etc. So it consumes a bit more resources I guess than when opened on one single browser, but that is a small drawback in the big picture...

Ok I've used Chrome for a few months now. I tried various workarounds for this. It seems you can't assign a sticky window name easily as I wanted, which would also change the window's name under the "window" menu list (right, next to help). So, two decent workarounds I found, either:

1) Create a bookmarklet with following code:

With this you can assign any name you want. Only drawbacks: this just temporarily replace the <title> html tag. So this will get replaced as soon as you reload the page or navigate elsewhere... What I did for a while was just create a placeholder simple html page with my own desired title.

2) Via an extension called Tabs Outliner. Great extension which allows to easily manage tabs and windows, assign sticky names to windows / tabs, even notes and separators, re-order things, etc. Although this info is only visible via the extension's manager window. But also, this extension is a great tool to manage endless sets of windows & tabs, kill them and later reload them. To keep resource usage low and have some kind of in-between workspace for things which you'll read later. Hence this almost sounds like a commercial, but anyway, try it for yourself. In the end, this is the best workaround for managing windows in Chrome I've found so far, and for this question...

Spaces, is chrome extension that lets one turn browser windows into manageable workspaces.

Renaming tabs or giving windows names in some dedicated windows is completely different thing and doesn't match requested purpose. The whole idea is to have Chrome windows list always at hand.

While also failing to find a solution I've made up a little script for AutoHotKey real quick. It may be enhanced somehow mb, but now it does exactly what I wanted: renames Chrome windows.

Unfortunately, it doesn't save windows' names between sessions, but that's a small price. After I've satisfied the initial rush towards the feature, now I'm considering to make Chrome extension for it. Although I haven't ever used JS, it's not the main obstacle. It would be worse, if Chrome API does not give access to window's title, and i suspect it is so. As a workaround, I could change current tab's title to one, window must show in TaskBar, but this is gross (and no "save titles between sessions" feature still).

It's strange, that I came up with this idea just yesterday and not some years ago. It's hard to overrate, how big this small enhancement to the workflow is.

The best I've come up with is to use a data: URI in a new tab, specifically

It doesn't meet your requirement of changing the name in the taskbar though - the suggestion in another about the Taskbar Renamer utility seems like a complimentary approach.

You can setup a custom chrome search engine with a short keyword (like the letter t) to make this more convenient. This is better than a bookmarklet because it will survive restarts and supports Ctrl+Shift+T.

This is how I use this technique:

As of Chrome 90, there is a builtin feature for this unter "(three dots menu) > More tools > Name window". 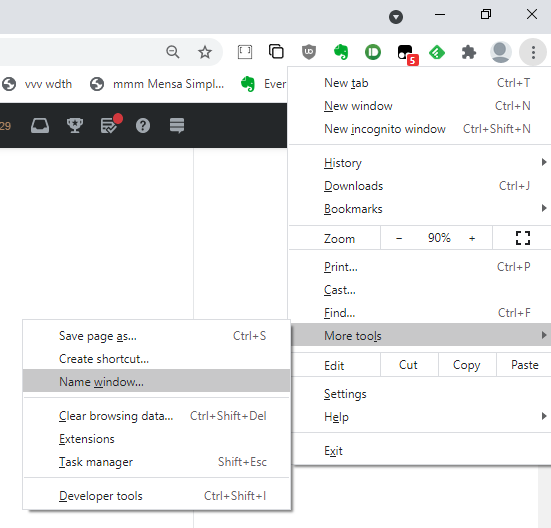 However, the name isn't visible anywhere but as the window title.

Add Session Buddy extension. Open a chrome window. Add a group of related tabs to the window. Go into SB. Find the "Window" with the tabs that you had added. Right click, "Save" and give the session a name. Look at the list of "Sessions" in the left column.

You can assign a new group for every single tab with customizing tab title.

That's must be a productive feature!

Consider Tab Modifer and Open Tabs which lets you see all opened tabs in all windows.

I had the exact same need. I like to organize my projects into browser windows. In Windows you can use an application called Taskbar Renamer. It allows you to rename taskbar apps to whatever you want, so I can rename my windows to ProjectX, ProjectA, Email, etc. It is the closest to what I want.

Instead of saving your tabs by window, save your tabs as bookmarks within folders.

In the Chrome bookmark manager you can highlight multiple tabs or folders, and right click to select "open all bookmarks" or "open all in new window".

You can close all Chrome Windows not in current use and quickly open a new window, with all your project bookmarks, whenever needed.

I use this simple extension to quickly search, and the native chrome manager to open groups of bookmarks.

My setup has changed a few times, but I stuck with Chrome, and now back to Windows 10 after a few years of Mac. There are good alternatives to Chrome, but I didn't feel the need so compelling to switch yet, so Chrome's still what I use.

Currently, I simply rely on a few profiles to manage my different browsing needs, and to avoid overcrowding with too many windows & tabs, extensions, history, etc. Most have a dedicated Google account created for using the sync feature and to have it on the cloud (tabs, history, extensions, settings, etc). One's for day to day, others for my job, etc.

There is no real proper answer to my question, but a some extensions help overcoming too many tabs & identifying windows / naming them. To help this, here are a few extensions:

This answer is mostly a draft, I'll try to clean this whole Q&A later.

7
Is there a Chrome extension to set the window title

19
How can I use Autohotkey to focus on an existing Google Chrome tab, not a "container" window?
3
How do I make Chrome open chrome://newtab in an existing window?
0
Visual Studios 2012 Debug MVC App Opens Chrome Browser in Random Window
30
Is there a way to move multiple tabs to a new browser window, in Chrome?
7
Chrome Metro Switch windows shortcut
1
Global windows hotkey to click web page in chrome
0
Always opening external links in incognito window Chrome on Mac OS