In Google Chrome 42, it is combining a user's history from home to work and school. A teacher saw the history and saw very questionable pornographic materials (we have a zero-tolerance policy for pornography) listed. After I connected, I noticed the link that this history is between all the signed in devices.

Is there a way to view history in Google Chrome just for the single computer, and not for the other devices? I am not looking for instructions for turning this off, as that's easy to do. I'm looking for what this computer has seen in Chrome

You can do this by going to Settings and then clicking on 'Advanced sync settings' under the title Sign-in at the top.

Then de-select 'History' and save your settings.

Or you can just sign-out from Google Chrome altogether.

Or just browse in Incognito Mode if you do not wish your history to be shown on other connected devices.

Because, if any device is connected and synced with Chrome, it's definitely going to show its recent history there.

This may only be showing because it is recent, so I'm unsure of how reliable this is over a long term situation, but If it's not showing anything right at the top then my best guess is that it is too old to keep record. When viewing history on my phone (signed into the same account) It tells me that I am viewing only mobile history and provides a link to look at both together. Google's help page linked in "Learn more" was unhelpful with what you're asking. I'm not making any judgement calls for you, but I'd say that unless you keep student records of what sites are visited on the computers, I think you should just let him off the hook for this one.

Unfortunately, there's no easy way to do it after-the-fact

Although there isn't an exact mechanism that allows one to filter the history by device (at least according to this Google Product Community expert), there would be ways to prevent it from the future, though I imagine preparation would not be as useful for providing a workable solution to the issue at present.

Presumably it seems to be a matter of knowing whether or not unauthorized websites were being access from that particular computer so as to ensure there is not a wrongful punishment given to someone for something they may have done on another device, essentially framing them for a crime they didn't commit if mistaken between the two. Even now we're in version 99.0.4844.51 and there isn't a way to filter activity that way as explained later, but if you wanted to prevent this in the future, there are a number of ways to go about it that I won't get into, the main one being to have individuals use guest accounts or create an Chrome account specific to the computer and not a Google account that is set up to sync (offline Google account). Alternatively, turning off sync if using a Google account otherwise.

However, those are beyond this post and to address the question there are a few different ways of approaching the situation to achieve similar end goals that will help address the issue of the task at hand, though it's much more tedious than if a filter for such activity did exist.

The Method of individually verifying an associated device per history item

There is a way to manually review the history individually where you can open details to help you determine the origin of an individual history items. Meaning that when you see something against the rules, you have to view more details about it to determine if it was done on that computer or another device, but even then there may be situations where identifying the device is not possible. See below for the excerpt from View & Control Activity in Your Account

the activity and why it was saved. You might also get location, device, and app information.

Take note that it does say, "you might also get ... device, and app information." And also, activity is different from browser history in the sense that activity includes all interactions with a specified Google service, whether it be with Chrome in a browser or a mobile device's in-app view of an internet webpage.

Usually mobile devices are good at at being identified but if the user's other history is from another computer or laptop with a similar operating system, it may be harder to distinguish between the two as they might just both say Windows Device, or Chrome Browser, and would only be able to help rule out what's not from a mobile device (where it usually can specify the make and model, or if it's an Apple product), but shows information as taken from the header request being made for a webpage. This is why it may not always show the PC's name to distinguish itself in the entry's details because it just shows you information it can find the from the request header of the browser, or whatever information the user's settings will allow the browser to give.

Thus in this sort of manual-based method, if you review the activity of the account, which should be the same as the history of the browser since it's synced, you can at least more tediously pull up an item in question and have a fairly decent chance of determining if it was from the current device or another device by viewing the details.

While there are filters for viewing Google Account Activity, it is limited to a date range and which Google product the activity stems from, not so much which device it comes from, unforunately.

The Quicker but Destructive Method

An alternative method that is more destructive involves using the account to delete the activity automatically of the other devices so that all that remains is the one computer's history. As long as the history of those other invasive device history doesn't need to be preserved, they can be removed by removing the other devices which they came from, and removing those devices from the account. And essentially make the computer whose history you want to see be the only computer (or device) activity remaining on the computer (and account in this case). So this method would require the previously signed in account of those other devices to have to sign back into to all their other devices and whatnot afterwards.

Essentially, the process will utilize the security and privacy features of a Google account, which means you're going to remove the other devices in order to delete their activity and removes their history from appearing with the computer you're on. But in other words, in order to remove the history that's being synced to the computer, you would have to pretend that the other devices are not meant to be a part of your account so that all the activity will be recognized as not being yours (and by "yours" I mean whoever's account is signed in and has synced with the history of the computer in question) and will be removed as a result of what will appear as a security breach to the account.

It seems to me, at least as far as I can tell, it has to be escalated to that level because Google considers the account activity as one single entity and does not separate the activity by device on the surface level or for the user end because it doesn't deem it a necessary feature since you are you and whatever you do you would normally only need to be seen together as one history of actions, irregardless of where it's coming from.

Of course, on the back end, it does keep track and as previously mentioned, you can see individually which device it comes from, but to filter them did not seem to be a common sense feature and is not available to end users to do so. Hence, in order to trigger the removal automatically, you would need to make it seem as if all those other devices adding to the history were done so by a malicious actor to result in their removal.

However, to do all this, you will need the sign in information for whatever account owns the history of those other devices. Although you've mentioned trying to sign out (I presume you refer to signing out of the Chrome browser), it's not quite the same as saying all those other actions were not yours and basically only prevented future syncs from occurring rather than removing past history.

Refer to the General Security Information topic for See devices that have used your account and remove those other devices from the account but specifically not just remove them, but using the security feature stating that you don't recognize the device. When you remove the other devices in this way, Google will remove the associated history of those devices because it will no longer see it as your (of the account signed in) actions.

There are three answers to your question. The first is to change your Sync Settings. To do so go to Settings, then click Advanced Sync Settings on top.

A modal will pop up and then uncheck History and click Ok. 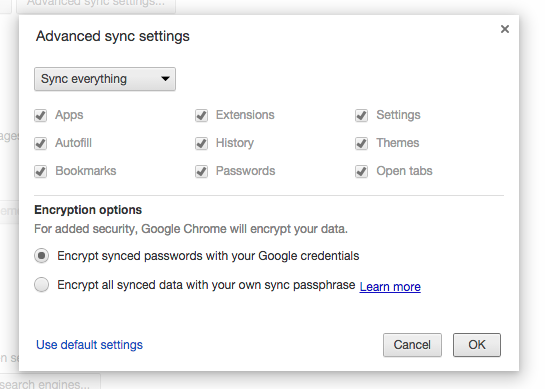 An alternative to this is using Incognito mode. To do so click File then select New Incognito Window. The shortcut is control + shift + n (cmd on Mac).

None of your browsing history will be saved when you exit the window.

A third option is to manually delete the individual history items. Check the items you want to remove and then click Remove selected items.

Not the answer you're looking for? Browse other questions tagged google-chrome history or ask your own question.

16
Does Google Chrome sync history between computers?
1
Google Chrome sending background requests without me visiting the page
1
Why Chrome history is showing files not opened with the browser
2
backing up Google Chrome's click history to transfer to another computer
0
Google keeps refreshing itself constantly in Chrome
6
Chrome history not properly synchronized
2
How do I clear google chrome predictive searches?
2
I logged into my work computer with my personal email, can my employer see my google search history on Chrome?