I've recently bought SilverStone Sugo SG10 micro ATX case. It has 2 USB ports on front panel which has strange internal connector which doesn't seems to match to any connectors on my Inel DG43K motherboard. This connector looks like "dual" USB internal USB connectors paired together with one "blocked" pin hole. It doesn't match any motherboard connectors. Any idea how I can connect my front USB ports for this particular case?

usb motherboard
Share
Improve this question
asked May 6 '15 at 13:49

The connector in question is a USB3 internal block connector, known as a "USB3 ICC A" connector type.

From that chassis' manual: 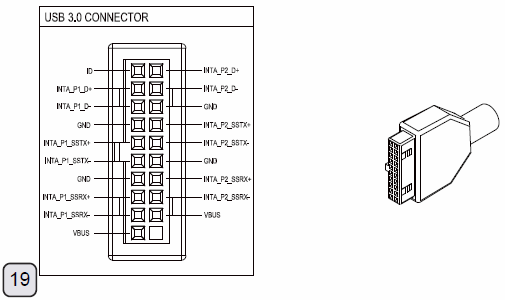 Intel HAS adopted that internal header specification as seen here. That document is dated August of 2010, so it was right around/after the time your board was released.

Newer Intel boards, like the DZ75ML-45K. support USB3.0 and include a USB3.0 Front Panel header. 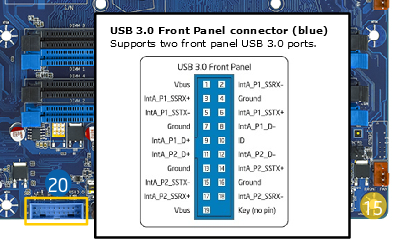 To use you chassis USB ports with your motherboard's USB2 headers, you would have to cut the end off of the cable (or find an USB ICC A extension cable to hack at) and rewire the internal wires to the standard USB2.0 pin-out specifications for internal USB2 headers.

You should be able to figure that out by using that USB3.0 ICC A document from Intel (above) and the technical specs from you motherboard (or really, any accurate USB2.0 header/pin-out diagram).

Comparing the two diagrams, the labels don't line up very well. I tend to trust Intel over chassis manufacturers for technical accuracy, so their pin-out is probably more accurate. In the end I would expect they are compatible (since it's an accepted standard), as manuals are often inaccurate, but you never know for sure until you have it in-hand to examine and/or and try it.

That bulky 20-pin plug (with one pin not connected) is a USB 3.0 internal motherboard header:

It won't connect directly to a USB 2.0 internal motherboard header. But this is a common problem, so there are adapters for it. For example, searching eBay.com for usb 3.0 to 2.0 turns up adapters for a dollar or less (although be prepared to wait ~a month for shipping from China): 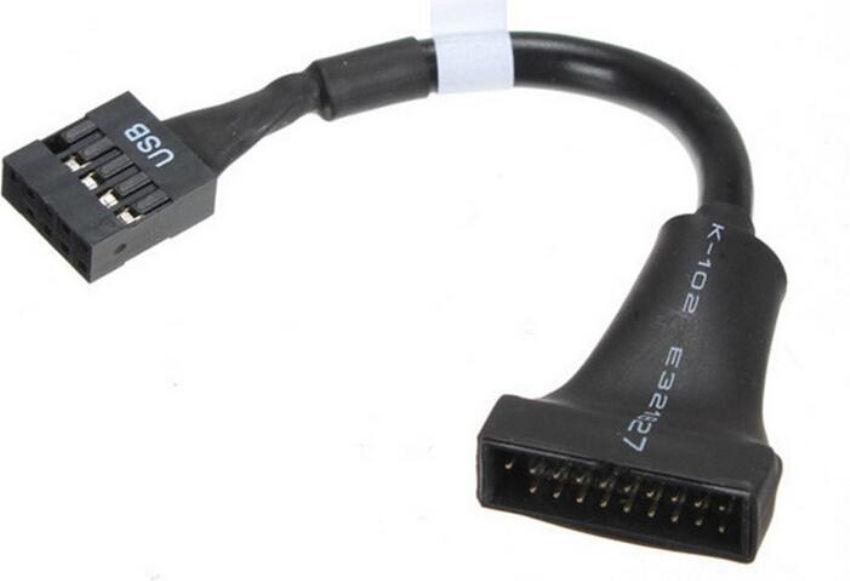 Fairly obviously, such trivial adapters will not magically make an old motherboard faster, so the connected ports will have only USB 2.0 speed, even if they claim otherwise.

If you need proper USB 3.0, consider a USB PCI expansion card. They can add more ports and are not too pricey, although any new motherboard would have this built in.

Not the answer you're looking for? Browse other questions tagged usb motherboard or ask your own question.