Windows 7, file properties, date modified, how do you show seconds?

Anyone know a way to immediately show the seconds of a file's date modified property in the GUI? So if you create a file, any file in any directory, right-click and choose Properties, the date modified (if it's recent) will say something like "dd/mm/yyy hh:mm, one minute ago" - reminder this is in Windows 7. Windows XP did it normally. Then they changed something.

If you wait a while, eventually you'll see the seconds, I'm not sure how long a while is, but this is incredibly annoying if you want to troubleshoot something that relies on the seconds of timestamps... is there a setting? registry key I can change perhaps?

I'm literally using Chrome, pasting in the path of the directory to be able to see the seconds quickly (as a workaround) but would be nice to be able to use Win7.

I found a solution at http://www.nicholasoverstreet.com/2010/03/windows-7-annoyance-file-properties/.

Remove the string dddd (e.g. change it to ddd) click 'Apply' and it should work fine.

'Rightclick file properties' uses the value "Long Date" + empty_space + "Long Time". Long date is 'dddd, d MMMM yyyy' by default, and 'Long Time' is h:mm:ss tt. However, it looks like as long as you have the string dddd in 'Long Date', it may sometimes ignore your 'Long Time' settings, overriding it with "x minutes ago".

I've been looking at the same problem and as far as I can tell, no there isn't a way.

However, I've been using a workaround that has satisified what I needed it for so hopefully it will help you. The following command, when run from a command line in the directory in question, will print out the file names and the modified date down to seconds:

I hope that might be of some use to people.

You can view the file creation/modification time quickly in PowerShell:

Inspired by a TechNet blog post using PowerShell for some other crazy tricks.

It's important to note that Windows does show seconds. The hiding of seconds only happens in the main Explorer window: 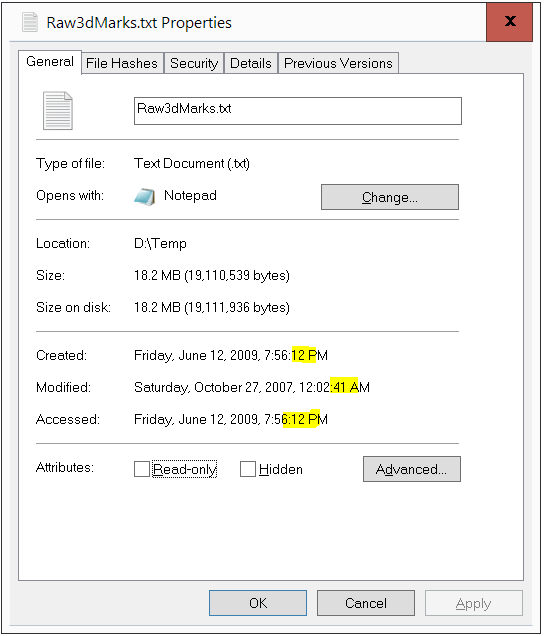 If it works on Properties, why not in the main window?

The reason you don't see seconds, is that it was a usability decision to remove them (99% of users don't care about the second a file was last modified).

To accomplish this, the shell team is calling GetTimeFormatEx, using the flag asking for it to remove seconds:

which returns the Short time format:: 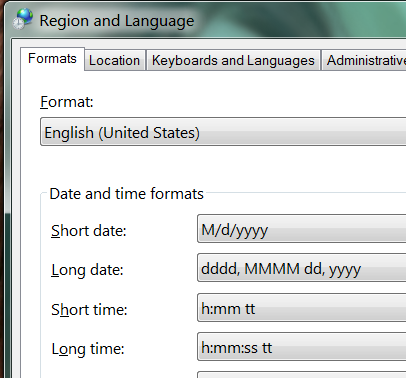 with any seconds (ss)1 stripped out.

1Even though the default en-US locale does not specify ss in the Short time format; TIME_NOSECONDS will remove any ss even if there was. Nor would i obey that command even if you were. 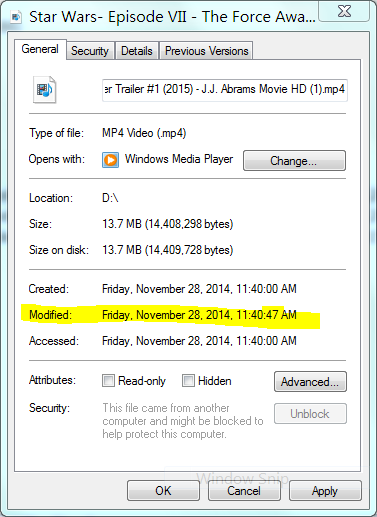 If you don't want to use the Windows GUI to see the time a file was modified (down to the second), then don't use it.

Edit 3/26/2015: The Windows UI will always show the modified time down to the second - even if the file has been modified very recently:

According to Microsoft Answers: (Archived, Jan. 2010)

Unfortunately we don’t know why this was removed; it’s on the developers’ side of things and out of our realm of “in-the-know”.

As you specified Chrome (and Firefox) will display seconds.

I just loaded XP pro in vmware, and saw the default for XP is sans seconds. Then I checked GNU ls on both Linux and Cygwin, no seconds displayed (by default). Granted you can do ls -l --time-style=full-iso to get the granularity you need. I guess I never really thought of needing that level of detail.

fileTweak is a program that adds a tab in Explorer properties. It is mainly used to change the date/time, but it will display seconds. Unfortunately it isn't free.

That said, I thought there was a free add-in that basically did the same thing.

Explorer++ shows seconds. I used that for this problem.

You can change the default "Short time format" by going to:

Simply set this value to: h:mm:ss tt and you'll have seconds shown on file properties now.

Not the answer you're looking for? Browse other questions tagged windows-7 windows windows-explorer file-management date-time or ask your own question.

4
get exact file create time windows 7
1
Windows - display exact time instead of "1 hour ago"
1
Disable relative timestamps
11
How can I force Windows to display the seconds in the date modified/created column of Explorer?
5
batch - File last modification time with seconds
1
New text files created with uppercase extensions
0
How does Window Explorer order files when the creation date/time is the same?

7
How can I make Windows Explorer show file modified date instead of created date?
0
Windows 7 lags/hesitates on Start menu, right-click, and in Explorer
11
How can I force Windows to display the seconds in the date modified/created column of Explorer?
0
How to restore a file's Windows "Date modified" from an Office or Acrobat metadata date?
1
Windows Explorer show file modified date as ago string
0
How to bulk rename files in a directory using the Date column
0
Batch edit file properties by parsing filename text