This page gives two options for if you have more than 254 hosts, get another IP range or use subnets.

But if you've got an IP address range which lets you have more than 254 hosts, why not just keep assigning IP addresses to each host?

If you're existing network still has enough unassigned host numbers, why not just use as they are?

I can understand NAT as way of adding more hosts to a network without asking for another IP address range. Besides won't offices where the workers just need internet access and access to local resources use NAT anyway and only have to use (the order of) one global IP Address?

As I understand it, in say a standard office building, typically each host isn't connected to the internet but to the local network, and then through that they can access the internet, so in what circumstances would each host need a globally allocated address and not use NAT?

You're getting 2 concepts crossed here. NAT is used to give several devices a point of access to the outside. This, in a home network, for example, allows several systems to access the internet sharing one external (i.e. publically routable) IP address.

A subnet, as in the example above, is the internal network, behind the NAT device (for simplicity's sake). Most SOHO networks have one subnet, maybe 192.168.0.0, or something like that. SOHO routers (NAT, firewall, etc) give a subnet mask of 255.255.255.0. You can see these things on your home network by opening command prompt (in Windows) and typing:

Larger networks, and some small business networks even, will have multiple subnets. Large businesses almost always need several networks, and it's important to segment traffic for many reasons other than the number of hosts it can support. Large networks will have a range for routers, load balancers, and possibly DNS Servers. Lets call it 192.168.0.0/24. Then their core and periphery switching networks may have a subnet, 192.168.1.0/24. Server can have 192.168.2.0/24. Maybe something even larger, or several blocks for different racks or data centers. We could give the servers a 10.0.0.0/16 with 65,536 addresses. This probably isn't ideal for reasons that are off topic, but illustrate the point.

Furthermore, users in building one get 192.168.11.0/24, building 2 gets 192.168.12.0/24, etc. Then there's these things called core switches that take care of all these VLANS (Virtual Local Area Networks, running on different subnets, which is short for subnetworks), and where their traffic should go. This whole campus network could be behind 10 routers with 100 Internet IP addresses (publically routable addresses), running NAT to ensure the outbound and inbound internet traffic is getting where it's supposed to be going.

Hopefully that helps. I read your question a few times, and it seems like this is what you're looking for.

EDIT: A poster asked for some clarity. I do believe it's standard to refer to the internal side of a router as "behind" the router. The internet is the "front" or "forward" side. Additionally, commercial routers can and do support multiple IP addresses. So, in my example of 10 routers with 100 IP addresses, that could be 10 internet IP addresses per router, or any other configuration. Many routers for large networks load balance or failover to hot spares, sometimes both. Finally, yes, the 10. network is for large networks. BUT, 10.0.0.0/8 would allocate the entire 10. network, with 16,777,214. This would defeat the purpose of subnetting. If we needed 2,000 hosts, I would have my first network as 10.0.0.0/21, and my next network would then be 10.0.8.0. This is what VLSM does, and how it can be used to create networks of specific sizes without taking up the entire range.

Finally, here's a network diagram from Cisco to show I'm not crazy, and that these types of networks exist in common practice: 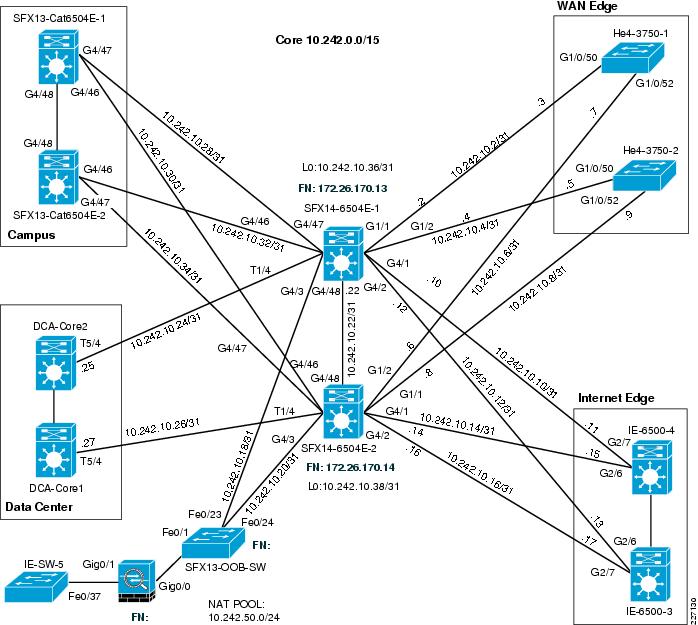 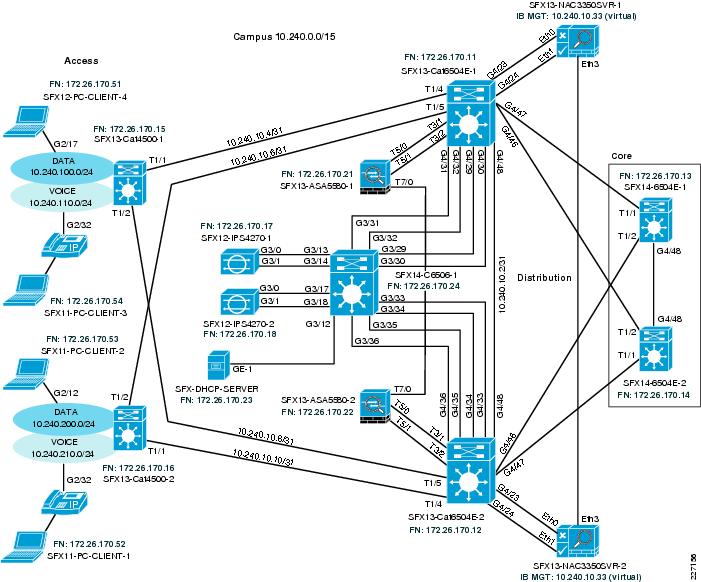 Others have posted good (but long) answers. Here is a short one.

By keeping the number of hosts in a domain limited you reduce the amount amount of traffic through parts of the network and you can use this fact to leverage this to increase speed within the network. Having a large "flat" network where all hosts are in a single subnet becomes unwieldy to control and manage.

Also, having multiple subnets allows for implementation of better security by limiting resources based on IP range (or interface if set up correctly) at a router/firewall level.

MagnaVis mentions a lot of solid points, but you can't forget that back in the day a broadcast storm could take down a network, and still can in some cases. Smaller subnets mean fewer broadcasts to acknowledge, which is beneficial to every host on it. It's not nearly the issue that it used to be simply because of the power of modern computers, and the tolerance and speed of modern networking equipment.

"IPv4 uses broadcasts very prolifically, causing a bunch of prbolems, the worst of which is of course the dreaded broadcast storm -- an uncontrolled deluge of forwarded broadcast traffic that can bring an entire network to its knees and devour every last bit of bandwidth. Anothe rnasty thing about broadcast traffic is that it interrupts each and every device on the network. When a broadcast is sent out, every machine has to stop what it's doing and respond to the traffic whether the broadcast is meant for it or not." - CCNA: Cisco Certified Network Associate Study Guide: Exam 640-802

The primary reason that businesses employ vlans, as MagnaVis mentioned, is not to get more IP's, but to segregate and manage data. Can users on vlan 105 see server traffic from vlan 120? Does traffic from the guest network route through the 10GB data switch stack, or straight out to the internet?

In the case that you need more nodes on a single subnet, you drop the subnet to a class B. Today a business should NEVER implement a /24 network (255.255.255.0) when they begin to build their first network. It'll cause growing pains. Expect that every employee will utilize three IP addresses, minimum, and budget accordingly.

Because the number of IP addresses is limited, NAT is used as a method of address preservation. This is why internal networks have address ranges of 192.168.x.x, 10.x.x.x, etc. There are examples of reserved IP address ranges. See link below. NAT allows the internal hosts to use these reserved IPs and translates them all to a single external IP address. In this way we can have thousands of hosts access the internet via a single IP, hence the IP address preservation. In the case you need a dedicated external IP address for a server, you can set that up as well using NAT.

IPv4 addresses are very valuable. I'd love to own a class A block. I'd be rich!~ Check these out. http://www.networkworld.com/article/2228854/microsoft-subnet/microsoft-pays-nortel--7-5-million-for-ipv4-addresses.html and http://forums.theregister.co.uk/forum/1/2011/12/05/borders_flogs_ipv4_addys/

The webpage you reference says

Not every network environment requires subnets.

In theory that may be true, or may not even be true in theory. Like if you have two computers connected with a cable, and no router, no switch, no layer 3 addressing scheme. Then pick one computer, is that on a physical subnetwork.. maybe, maybe not.

According to wikipedia "A subnetwork, or subnet, is a logical, visible subdivision of an IP network."

I have my doubts even wikipedia is correct e.g. as if subnetworks can't be physical or that it's only limiting itself to IP, but the webpage you quote from is using a definition like that. And clearly if you are given a subdivision of the internet(a rather famous IP network), or even just given an IP of a subnet given to your ISP, then your network has / is on a subnet.

Even the network it describes has the subnet it has been given.

So the webpage you refer to is just plain wrong!

What this webpage means is that not every network environment requires further subnetting. I could agree with that

I guess another definition of subnet might say that the IP address block given by IANA is just called that, an IP address block, and not a subnet. I guess you may then say there is no subnet.. Though even then there is really 'cos you'd have a subnet mask. Ultimately, terms need to be defined.

For example, if your organization’s network has 254 or fewer hosts — and the network lives in one building (what a concept), there’s no reason to subnet it.

And if hosts were in different buildings, I suppose there would likely be different subnets, but maybe it's possible to have them on the same subnet, there probably are many ways, i'm not sure if they are all viable ways, but either way, it looks like the webpage is wrong there too.

The title of the page says

By definition, subnetting is not going to get you more addresses. It's like if you have x number of people and they get into groups, then however they group up it's still the same number of people.

NAT will get you more addresses because it involves you using an additional subnet, one that you weren't using previously.

in what circumstances would each host need a globally allocated address and not use NAT?

Multiple servers online is the typical reason. And a company that has been given the IP addresses.

Though even there NAT could be used in theory. But I think NAT devices port forwarding tend not to be used there as it's unnecessary extra work, even if there were a super professional NAT device that makes port forwarding very professional, techie and administrable from the command line, it's possible. But if you're asking When people use multiple public IPs it's for the multiple servers. But I am not sure that it'd be a 'need' as in theory it could be done from behind NAT.

Remember that the public IP Addresses came first.. before NAT. So it's more of a question of Why one needs NAT (and that question has a clear definite answer which brought about the invention of NAT). Now as a SOHO person you're seeing all these private ip addressese and asking why you need all the public ip addresses! and yeah technically I suppose you don't need more than one! but you might like more than one so as to not do lots of port forwarding on the GUI of a NAT device.

if you've got an IP address range which lets you have more than 254 hosts, why not just keep assigning IP addresses to each host?

You can subnet I guess if it's really big you might have a speed issue with You can google about subnetting increasing performance.

The answers on this question expands on that

And another answer says if properly configured then even a large subnet isn't a problem. (but to configure it "properly" may require a lot of expertise and familiarity with the issues!). One issue is too many broadcasts.. but there are others issues mentioned there that could affect performance. And some devices maybe aren't really designed/tested with a very large number of hosts in mind.

Not the answer you're looking for? Browse other questions tagged networking nat subnet or ask your own question.

1
What is subnetting?
4
Configuring subnets quandry
4
VirtualBox network configuration
1
Subnetting 90.103.80.0/21 into 8 subnets with at least 250 hosts per subnet
7
Create a second network on same physical LAN?
1
Clients from multiple subnets can't simultaneously connect to server
1
Practical (not theoretical) Subnetting 192.168.0.0/25
3
Why am I having connection difficulties across two subnets?
1
Understanding routing and subnets