How to properly extract the content of multisession CD/DVDs?

When I was 11 years old or so, I made copies of my Web 0.9 websites onto CDs among other original content.

Now I'm 25 years old, I had forgotten about the CDs and the content still has sentimental value. I would like to get rid of that stack of (decaying) physical CDs while creating backups of the content on other physical forms (local hard drive, USB sticks, remote server...).

To copy from the CD into the hard drive, I'm using simple copy and paste because initially I didn't want to bother dealing with ISO images, I am interested in backups of the content and the files timestamps, not having a 1:1 binary copy of CDs or a huge ISO file since most of the files are redundant or contain useless large files.

I messed up and I totally forgot I used to make multisession CDs, which is the act of burning onto the same CD multiple times. Here's why I'm asking the question:

One time I was messing around with a CD and tried out the "Create ISO" option on Windows 7 for the sake of curiosity. Turns out:

This baffled me how there was potentially invisible files to the file browser.

There is a likelihood the OS on which the images were burned on were either Windows 98 or Windows XP. I do not remember.

Based on the above description of the situation and the fact that information about the how the CDs were burned were forgotten over time:

(Following this I noticed how certain CDs/DVDs I have showed up as blank to Windows which asked me if I wanted to write on it, whereas the surface of the disc indicated it was written on. I still wonder if there are invisible files on these discs, or if the disc has rotted, or if it's just a failed burn I forgot to throw away)

The question is not about how to create a CD image. It is about the proper handling of multisession CDs content retrieval in a non professional environment.

I recommend IsoBuster to pull all your data out from multi-session discs, packet written discs, hybrid discs or even damaged discs. Other than the last use case you can copy the data without creating an image. 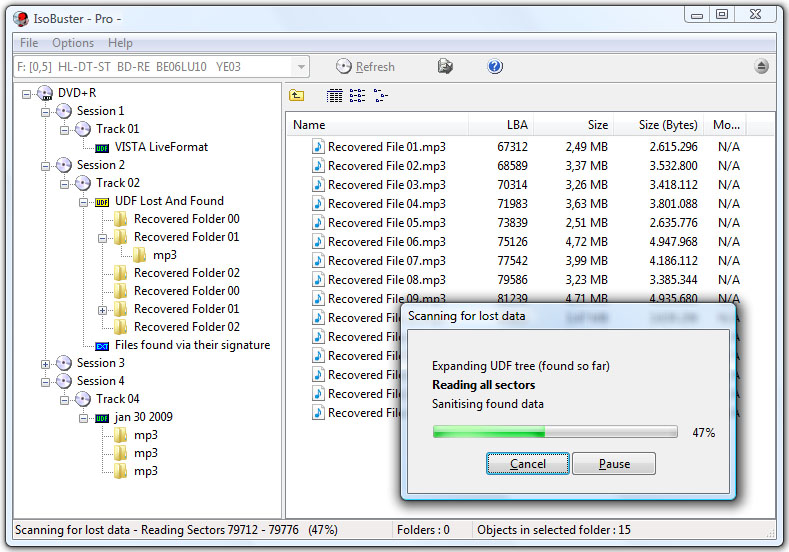 The Pro version's not free but you can click the "Free Functionality" button when prompted during install and see if it suffices.

Last but not least, if one particular optical drive doesn't read your discs properly, try with another. Drives from multiple manufacturers (and sometimes even models from the same manufacturer with different firmware) definitely exhibit varying characteristics when it comes to reading/writing discs. The age of the drive also does matter.

16
How can I copy files from a scratched CD/DVD?

2
Problems using InfraRecorder to back up ISOs of certain CDs
0
machine to load into and take out from a DVD burner, burning many different ISO-images
9
Is it normal for CDs/DVDs to decay over time, and what can we do about it?
0
Common ISO-file not fitting on a common cd-r disc?
1
Can't make an iso of burned DVD-R
0
Windows 7 Ultimate files to Iso
1
Sudden doubts about DVD+R reliability
0
Can I be sure that files copied from a DVD are not corrupted?