Is the bandwidth of the router usage divided equally?

I have a router/modem NETGEAR VEGN2610 which supports QoS.

Assuming there are 2 computers downloading something that requires high bandwidth (for example a movie with torrents), will the speed be divided equally between them? Furthermore, will it be any different if they use LAN instead of WiFi?

For simplicity, let's say that both users download exactly the same movie, no other users are connected to the router at the same time and they both are in the same range from the router itself. (i.e. all conditions are the same between both devices)

Edit: I want to set up a connection which is pretty much similar to this example: 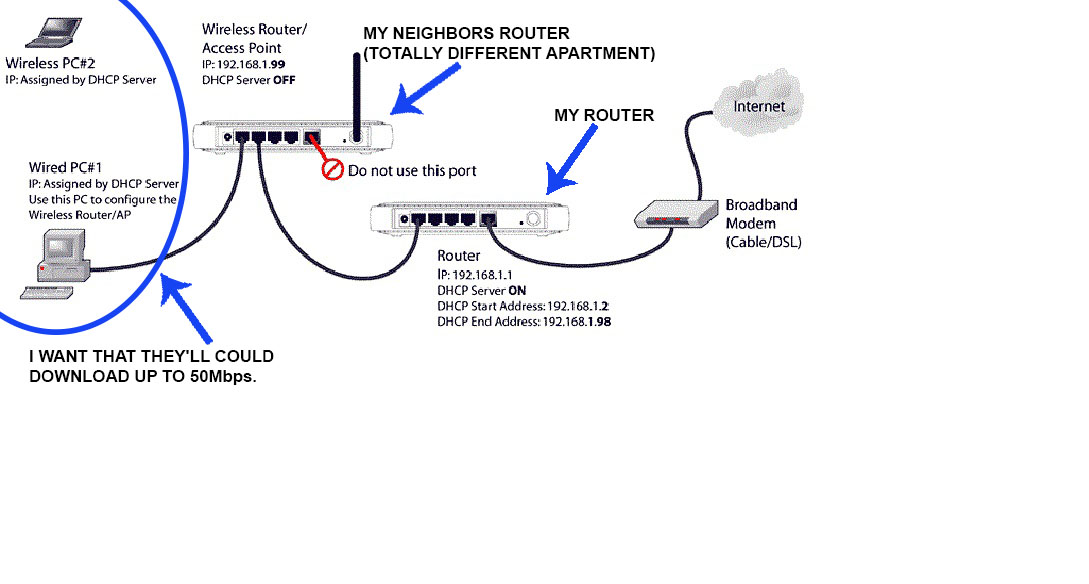 I hope it's much more clearer this way.

From experience I can say that while both users should get an equal share of the bandwidth, in practice it is often the case that one user will saturate the connection and the other will potentially be starved. This is not always the case, and I have seen at times that the user that saturates the connection will seemingly switch randomly.

I strongly suspect that TCP "enhancements" such as Receive Window Auto-Tuning, whereby network congestion is adapted for, can cause machines to slowly "hand over" bandwidth to each other.

Of course how they are downloading is also important. If they are downloading a movie via Bittorrent then they will also be uploading that file as well and if one of the clients is not set up to throttle uploads to a reasonable bandwidth then it is possible that it could fill up the routers outgoing queues and thus delay the handling of packets that the other computer is using to request the next piece of data. In this situation they could both end up effectively throttling each other randomly.

Per your edit it appears that you want to share your internet with someone, but restrict their bandwidth, presumably so that it is not you that is limited.

You need to look into having a router that supports bandwidth control. Your standard home routers are going to basically allow anyone connected to use whatever bandwidth they like. You need a professional grade firewall/router with that feature.

I've also found a guide on using DD-WRT to restrict it from using more than a particular bandwidth.

There are a few methods, but they vary in how much you need to do.

First you will need a DD-WRT capable router, and to flash DD-WRT to it. The DD-WRT page lists a few capable routers that can be flashed as you wish.

It would probably be best and more secure if you actually use this as the second router in your network above, and for your personal benefit change the password and keep it on your premesis, this way it is less open to abuse and if you connect your devices to the router nearer the internet then you will not be limited. Then you would simply drag an ethernet cable from this second router to their apartment and let them connect a Computer, Hub, Switch, or Wifi Access Point to that cable and they will have their internet access.

Then you will need to access the router settings in order to change the IP addresses and enable their QoS bandwidth management. You will pretty much need to set up the routers IP addresses as in the image above and it should be fine.

You'll want to look at their QoS Inital Setup and by the sound of it you may want to restrict data on all interfaces on that router (i.e. not the one you connect your machines to) and limit it to the rate you choose.

I don't have a router running DD-WRT to hand to tell you the exact settings you need though.

Not the answer you're looking for? Browse other questions tagged networking wireless-networking router lan bandwidth or ask your own question.

3
Reduce Network Bandwidth Usage via Web Proxy
6
Guest wifi mode on a secondary router
5
Does giving two bands in a simultaneous dual band wireless router the same SSID double the bandwidth for a wireless connection?
0
How can I reserve bandwidth on network without router access?
3
Networx showing excessive download bandwidth usage
0
Get router or computer to share bandwidth equally amongst applications
0
Why does one PC take a bigger share of bandwidth than another?
7
Netgear R6080 AC1000 Router throttling internet speeds to 100Mbps
0
If two computers are connected to the same router via LAN, can I share files through that LAN connectivity?