HDD activity when computer is idle

It happens on Windows 7, automatic defragmentation and antivirus background scanning are turned off. Recently noticed it happen also while running Windows 10 TP install (which is installed on another drive - SSD, but the activity is still on HDD). I've looked into Resource manager - "Processes with Disk Activity" and found only system processes there, svchost.exe mainly - does it mean, it's some service causing this HDD activity? How do I found out which one?

Based on PID I've found out which svchost process is causing it. 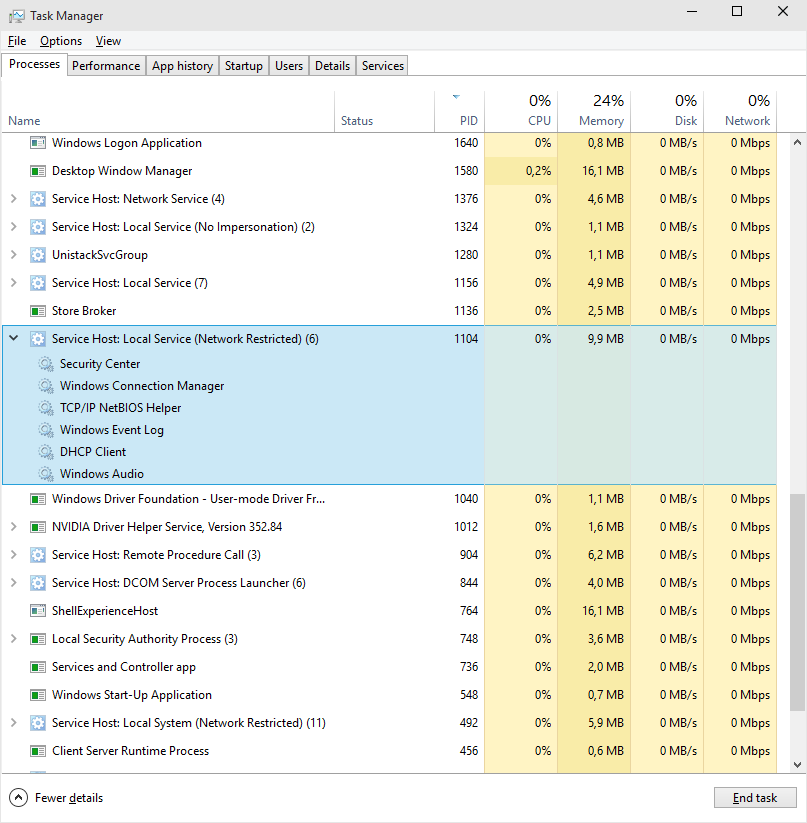 I had the same problem in Windows 10: after about 5 minutes of system idle, there was a lot of disk activity on data disks (non swap, just data files), which disappeared on just a single mouse move.

Process Explorer ( https://technet.microsoft.com/en-us/sysinternals/processexplorer.aspx ) does show the sub services. After about 5 minutes of mouse/keyboard idle, defrag.exe started under svchost.

You can disable it (scheduled defragmentation, the cause) via the Task Scheduler > Task Scheduler Library > Microsoft > Windows > Defrag > then disable the "ScheduledDefrag". Disabling it removed the problem on my system.

Windows starts the defrag process automatically using the Task Scheduler when you idle for 5 minutes, but you can also manually start defrag: right click on a drive letter > Properties > Tools > Optimize. The fragmentation percentage indicates whether there is a need to defrag.

SSDs don't need to be defragmented, because there is no physical head movement. Using defrag on a SSD lowers the life expectancy of a SSD.

Have you tried checking under the advanced power options?

I do not have a PC that I can test this on for Windows 10. However, I would image that you can find the options in the same/similar place.

Svchost is a host process for many services. You'll need to use a tool like Sysinternals Process Explorer to look at the specific instance of svchost to see which service it's running (you can see it by hovering over the process).

My guess is that it's probably the indexing service scanning your data for faster searches. Could also be windows update writing temp files...

In addition to what has been answered here, all of which were good answers, btw; another thing your HDD is doing quite often is getting the exact physical location of the cylinders. As the temperature of the hard drive changes the physical disks expand, and the temperature fluctuates depending on hard disk activity. Your hard disk controller needs to know where the cylinders are so that the arm can be exactly positioned at the cylinder where the requested sector is. This activity cannot be turned off.

Not the answer you're looking for? Browse other questions tagged windows hard-drive svchost disk-activity or ask your own question.