(Not sure if I am asking at the right site, as it might be software/hardware related and not exactly gaming. I guess I'll post this question on Arqade too.)

I have been having this problem since 2 days now. While playing the game, everything works fine, on ultra settings, with no overheating (max temp. 70). It has been working fine since the game as been released, and I have had no issues till recently. Nothing has changed on my PC since then.

This happens only with Witcher 3 at the moment. It has rendered the game unplayable, as it restarts my PC immediately on starting to play. I do not think it is a hardware issue, as the game has been working flawlessly before the last 2 days. This PC restart problem is completely new, and pretty continuous in occurrence. I was thinking these sudden restarts might be because of the PSU, but I just got this PSU a month ago, and have been running Witcher 3 on it without any issues, till this happened.

This is what I have tried so far to look into the issue, with no luck in solving the issue unfortunately.

Any help would be much appreciated.

On checking event logs on windows, I found out that at the exact moment my PC restarts, Critical Kernel Power (event ID 41) error. 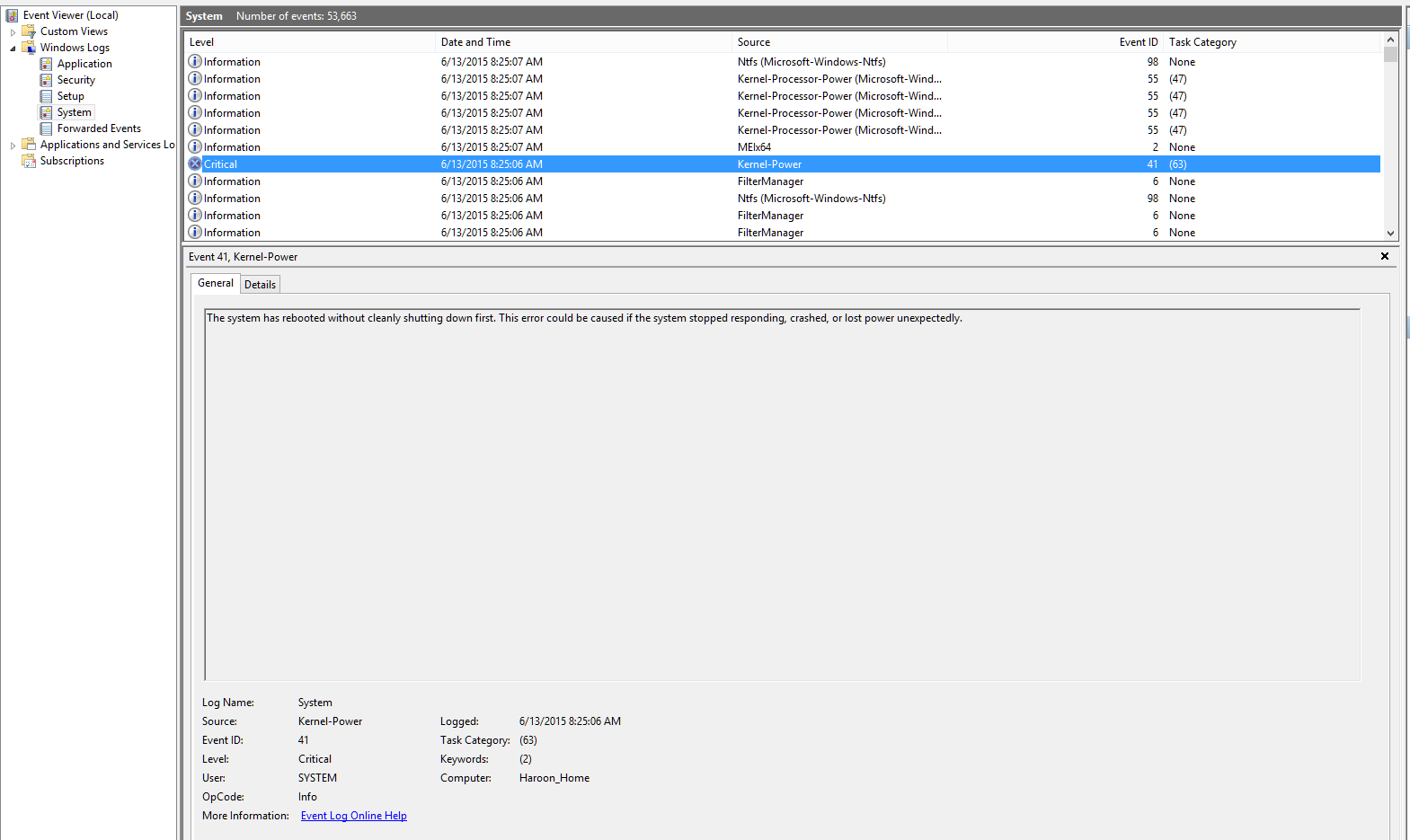 Not sure if this gives more clues about the error.

Also, when I am playing, my GPU TDP is around 98-99%. I just started measuring TDP. Is that normal?

Applications shouldn't make the PC restart randomly at any circumstance, clearly your problem is not related to the game. It's hardware or driver issue.

It's always challenging to determine a defect when it happens at random, unfortunately the only reliable way to find out is changing parts until you find what was causing the issue.

Generally, it's memory. But it's not necessarily defect, sometimes something as simple as inverting the slots can solve the problem.

In this particular case, analyzing your settings, I can also suggest your PSU is dangerously lacking for the graphics card you have, that can be an issue in potential.

If you don't have access to a more robust PSU, you can try and see if shutting down unecessary hardware solves the issue. Unplug the optical drive, secondary disks and any external device you don't require to play the game and see if it solves (or at least mitigates) the problem. If positive, you need a more powerful PSU to have all your stuff running together.

Since the game used to work fine, it suggests it's not hardware, as you already mention. Although it could still be, but I'll address that later.

Since other games work fine and you've played with the settings (graphic settings/sound settings etc) coupled with the comments you made in your OP, the issue actually occurs when you load the game, suggesting one of two things is the issue:

If it's the first, then you can start a new game and see if the same issue persists. You may need to take a back up of the game file(s) if you need to restore them later (if possible).

If it's the second, I would suspect you'll see something in Event Viewer which will help you to debug it. I would suspect it's a power issue. Borrow a psu from some one to test it.

Thanks a lot for all the suggestions guys.

I finally found the issue, and it was indeed a faulty PSU.

I overlooked the option earlier as this PSU is very new, and very highly rated, gold class etc. Turns out it was a faulty piece. Because I tried with a much older PSU, 500w, and the problem disappeared.

Thanks for the suggestions and help again, every one.

Not the answer you're looking for? Browse other questions tagged graphics-card power-supply reboot nvidia-graphics-card or ask your own question.

0
GTX 280 purple snow on bootup, card works without drivers
0
Computer Hard Reset Issue
0
PC rebooting randomly when NOT playing games (light/idle load)
0
Can motherboard reload power without error?
0
Tearing with G-Sync on and V-Sync off in The Witcher 3