How does airflow work inside ATX PSUs with 12cm fans? [closed]

It sucks in air from inside the case but how does the heated air get out of the PSU? There's holes at the back but we all know that hot air doesn't travel sideways unless forced. Also in my case the PSU sits atop the CPU heatsink so the air drawn inside the PSU might already be quite warm. Isn't this inefficient?

My setup looks like this minus the fan at the front of the case: 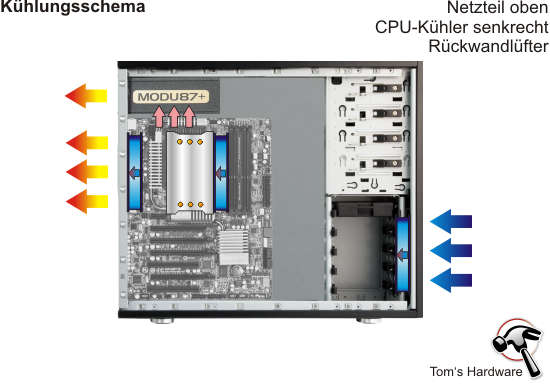 It sucks in air from inside the case but how does the heated air get out of the PSU?

As air is pulled into the PSU by its fan, the air pressure within the PSU will increase. This pressure increase will cause air to be expelled through any PSU opening where there is lower air pressure on the other side. So most of this air would exit through the backside of the PSU into open space outside the PC case.

However if you inspect the PSU thoroughly, you should also find openings that face into the PC case. (These openings exist to ensure proper air circulation within the PSU so that deadzones and hotspots are minimized.) So if the PC case is not pressurized (by case fans that pull air in) to a level greater than within the PSU, some of the air heated by the PSU will be recycled back into the case instead of being expelled outside.

Due to this recycling of heated air, I avoid using PSUs with 12cm fans. (FWIW I also think cooling in a PC has been marginal since day one of the IBM PC.)

but we all know that hot air doesn't travel sideways unless forced.

A pressure differnential (the outside of the PSU enclosure needs to be at a lower pressure than inside) is supposed to provide this force.

Also in my case the PSU sits atop the CPU heatsink so the air drawn inside the PSU might already be quite warm. Isn't this inefficient?

(That not the proper use of "sits atop", which implies contact.)
Inefficient is not the perfect word if you're concerned about this preheated air entering the PSU. It's not an ideal cooling method.
There's an additional concern of the proximity of these fans. Both the PSU fan and the rear-case fan are facing the same intake air space and trying to draw the same air. Since the air flow is primarily between the CPU-heatsink fan and the rear-case fan, the PSU fan seems to have poor intake flow.

If your PSU has an inlet fan pulling air into it from in the case as your comment suggests, then that fan will by definition be pushing air out of the PSU as well.

You cannot push a volume of gas (air) into an area and expect it to just stay there, it will raise the pressure slightly, then that pressure increase will push outwards and the air will then flow out of the area through any open vents such as the back of your PSU.

Quite simply if you push or pull air into an open area then it will flow through that area and out via any path available. Just because that path is sideways is irrelevant, you have increased the pressure inside the unit by using a fan and the best path available to equalize the pressure is via the outlet. Your PSU is not a sealed unit so it has an airflow through it.

Without this mechanism then air pressure would continue to build up in the area and, as fusion is pretty hard to achieve with oxygen and nitrogen, you would first end up with some kind of electron degenerate matter. If you continue pushing air in then you may well achieve fusion, but by that point I would expect your computer to have achieved several million degrees Celsius and probably melted.

Not the answer you're looking for? Browse other questions tagged cpu power-supply fan cooling or ask your own question.

13
Optimal Fan Placement and Direction for Air-Cooling a Computer
7
Is the exhaust fan necessary?
0
What is the best position for power supply unit?
3
Intel CPU getting too hot too quick
7
What direction should the heatsink fan face?
0
Can upward CPU dual fan cooling cause heat issues?
0
Can silicone screws safely contact CPU heatsink?
2
Why is airflow always front in, back out?