Why did Microsoft Word switch to French spell check on me?

I was editing a document in Office Word 2007 on Windows XP and suddenly all sorts of words are underlined as misspelled. I go into Word options and it talks about French dictionary! In the preferences, my primary language is set to English (US) and that is only language set.

What is going on??? How can I get back to English spell check?

To fix issue like this in Microsoft Word where the Synonyms for a particular document is in different language or the proofing language/spell check is changed to French, Spanish, etc; First select all the document (shortcut Ctrl + A) and navigate to Review Tab > Language > Set Proofing Language and then in the pop up , make sure the check-box "Detect language automatically" is unchecked. 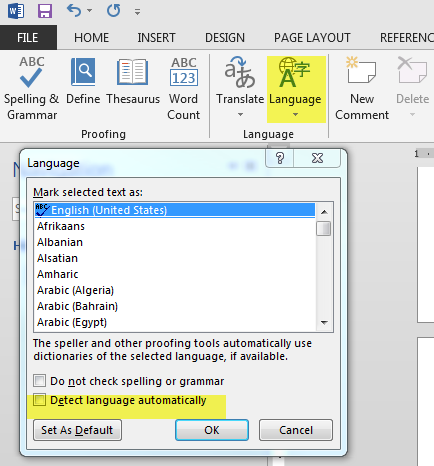 In case of Word 2007, go to Review tab, then to Set language, and then to the language of your choice (English). I think that should fix it.

There are two things at work here probably:

The easiest immediate fix is probably to select all, then click the language in the status bar and select English.

It might be that your default style is set to French (for whichever reason; that usually doesn't happen automatically); you may want to set the language there too.

I encountered in PPT 2007 where I was typing text in and suddenly normal words, such as "your" and "windows", were being highlighted as being incorrect. I right-clicked on the misspelled words and the spelling showed what I beleive was French spelling. I looked at the main dictionary and English was selected.

As mentioned above, I also went into the REVIEW>LANGUAGE, scrolled through the list and selected English (US), even though it was already highlighted, and then clicked default. The wording that was marked as incorrect was now correct. I can only guess that I had accidently hit a key combination while typing that forced a different dictionary.

This is a weird bug in Word, which still exists in Word 365 (just encountered it in October 2022!). I tried various solutions mentioned above, and none worked. In the end when I went into this option I finally got it to be showing French, and reverted to English - I wonder if I had the dodgy line selected at the time? 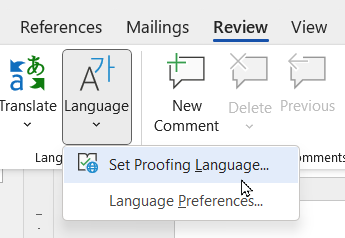 Even if you show print characters, there is no symbol inserted in your document to say you suddenly want to switch to French proofing. I wonder if an image added contains a series of characters which triggers this instruction? Weird.