Excel - can you change the line colour of a Freeze panel divider?

I've been doing a stylistic overhaul of some daily checksheets we use for cross-checking data. The first three rows have been set as a Frozen pane so they remain at the top as you scroll, but ideally I'd like to change the colour of the divider in order to have it stand out less.

I've tried adjusting the bottom border of row three, but no matter what I do with it I'm still left with the black 1px line underneath it. Does anybody know of any way to change or remove it? 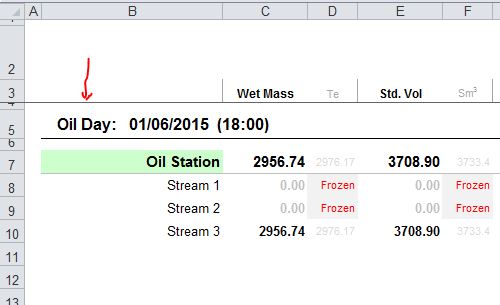 I note that this guy over on MrExcel.com once had the opposite problem of his Windows 7 theme over-riding the black and making it gray, but I can't find anybody else who's written about this.

Edit: Thanks to @jcbermu for the thought that if the line can't be changed, a top-down fill could be applied to the row above it. Though this doesn't change the divider, it can be used to fool the eye with the appearance of a line change, and at least allows departure from the stark black-and-whiteness of the default setting, assuming it is indeed impossible to modify the 1px line itself as @teylyn affirms. Will mark the answer as accepted if nothing else comes in within 3 days.

As far as I'm aware, the color of the Freeze Panes divider line cannot be customized with either the Excel user interface nor the VBA object model.

0
Getting consistency in the colour of cells in excel
0
In excel, how can I change the background colour if two cells are the same?
0
How to change cell colour in Excel 2010 based on certain criteria?
1
Change Excel Worksheet background colour based on values
0
Can you change the type of an object in EXCEL
2
Can I change the Windows 10 Automatic accent colour palette?
2
Can you make Excel Change Another Cell's Colour When This Cell is Clicked?
0
Excel. Change the colour of the comment indicator
0
How can I change the overloading indication colour depending on the amount of the overloading?