Expanding wireless coverage: What are the differences between LAN to LAN and LAN to WAN when it comes to connecting two wireless routers?

I'm trying to link two wireless routers with an Ethernet cable in order to expand my wireless network. Both routers need to provide wired and wireless Internet access.

I'd like to know the differences between the "LAN to LAN" and "LAN to WAN" connection methods, their advantages and disadvantages.

The generic name for both methods is Cascading, although the second one is sometimes more accurately called bridging. The router connected to the Internet is called the main router, while the other one is called the secondary router. Cascading or bridging can be used to extend the network's range and/or to reduce the number of devices communicating with each router. It cannot increase the total Internet bandwidth of the network beyond the capacity of the main router.

This type of cascading forms a bridge between both routers and both wireless networks, and requires the main and the secondary routers to be on the same LAN IP segment to allow the computers and other devices to connect to both routers. To do this, you need to disable the secondary router's DHCP server, so that router is really degraded to a simple switch in bridge mode. This configuration is recommended if you want to share files and resources within the network. 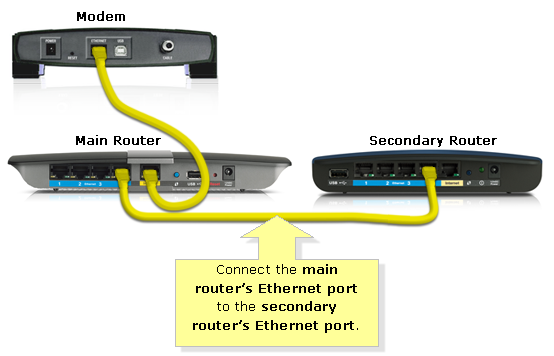 The advantage of this setup is that all devices are effectively on the same LAN (i.e. bridged) and can communicate with any protocol without additional setup. It is also compatible with practically any router on which you can turn off DHCP, as the router does not have to perform any layer-3 (IP) work at all.

Another key advantage is because it is on a single bridged network, if you set both routers to the same SSID and security on both routers, your devices can seamlessly roam between both routers, connecting to whichever has the strongest signal and not disconnecting you when moving between them.

The downside of this, is the same as you get with any large bridged network - increased broadcast traffic, which can impact mobile device battery life.

Connecting one of the Ethernet/LAN ports of the main router to the Internet port (WAN port) of the secondary router.

This type of cascading requires the main router and the secondary router to have different IP segments. This connection makes it easier to identify which router the computers and other devices in the network are connected to since they will have different LAN IP segments. However, computers that are connected to the main router will not be able to communicate with the secondary router without additional configuration, and vice versa since there are two different networks. 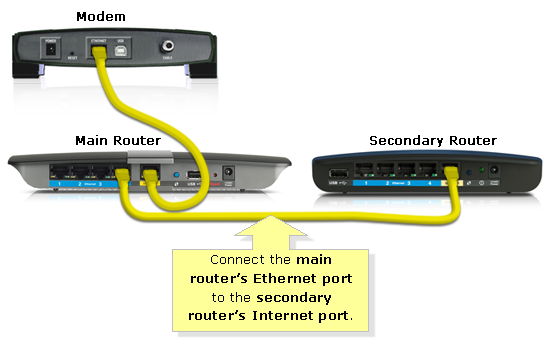 In general, this is a less preferred method, as it requires additional configuration (manual/static routing) that isn't always possible on consumer routers. Further, again for consumer routers, it gives you a double-NAT situation for devices behind the second router, which is undesirable. The additional layer-3 NAT/routing work imposed on the routers' CPU may also decrease wireless speeds

A final drawback is that the separate subnetting means you cannot move between the two networks automatically - a device must fully disconnect from one network and connect to the second one, it will not automatically switch to whichever router has the strongest signal.

To make sure we are on the same page, and to clear up some possible confusion, let's define some things. In the case of a consumer class router -- what most people call a "router" -- is actually several things in one box.

Also, they contain a collection of NICs (Network Interface Cards), some wired, and others wireless (radio based).

For your needs of extending your network with a second wireless router, we need to make that new router a part of the existing network (LAN), and have it offer a subset of the services it typically does.

I suggest the following procedure:

Some assumptions about your network:

An overview of what you need to do:

In this setup your New-Router will act as a second network switch, forwarding traffic between hosts directly connected to it; and sending traffic addressed to hosts on the Mian-Router over to there to be forwarded by the Main-Router. With your wireless network settings configured the same (same SSID, encryption method, password, etc.), clients connected to the Main-Router wirelessly will seamlessly transition to the New-Router if signal strength is better on it.

Not the answer you're looking for? Browse other questions tagged networking router wireless-router lan wan or ask your own question.

-1
Can a second router connect via WAN to another Router and establish a second network?
6
Two Internet connections via two modems, one router, specify which modem to use on PC
2
Am I behind dual-NAT?
2
Correct way to configure multiple routers in rental apartments for privacy / usability
1
How to configure the router when the gateway is in bridge mode?
1
WDS with TP-Link TL-WR941N as AP
2
Connecting two routers wirelessly
0
Unable to connect to slave router, IP address refused to connect
0
Convert Ethernet port to WiFi by adding an extra router
0
How do I connect my NAS to separate LAN's
See more linked questions

0
Wired router with wireless as internet source?
2
connecting two wireless gateways routers
1
Connecting two wireless routers with ethernet - will the secondary router transmit wirelessly?
1
How do I setup a wireless connection for a LAN to WAN build up between two Routers
0
Connecting two routers via a LAN to WAN without lan cable (wirelessly)
0
Difference between having two networks with cascading LAN-to-Wan (two routers total) and "two" networks with "Y-Configuration" (three routers total)
0
connecting two pcs on two routers connected (wan to lan)
1
What are the technical differences between WAN and LAN ports in a consumer router? For a two modem, one router setup