External hard drive not available once in a while, needs to restart

I have a 3TB WD external drive, that once in a while (1 time a week), I get the error

An error has occurred. The destination you have specified does not exist

I have to restart the PC, and then it works again.
What can I do ?

Especially, what does the restart do to make the disk work again?
So that I can do this instead of restarting.

checkdsk doesn't find any errors, and it shows as "Healthy" in disk management.

Trying to get in a folder I get:

The device is not ready.

How can I make it ready ?

Most likely the issue is due to external HDD powering down when unused for a while. This is a known issue. The drive goes to sleep by design to save power, and possibly extend the life of the drive, but it takes a few seconds to come up to speed after idling. If the PC requests data, and the driver has a short time-out, then an error occurs.

Depending on the model of the WD drive and the OS, you may benefit from installing updated drivers and drive management application.

I had the same issue only yesterday with a Verbatim drive which I have used a lot in the last 2 years or so, connected permanently via a HooToo multi connector which also remains connected to the PC so there is no constant unplugging. The set up is used for video work so there are a lot of .avi files which need moving about; no trouble at all until yesterday when I got the error message. In the end I found that replacing the USB cable appeared to solve the problem. With a new cable the drive worked perfectly again, if I replaced the previous cable I got the error. I replicated this experiment a couple of times. I have connected another drive useing the 'duff' cable and that has copied without issue. My conclusion is that there is something amiss with the Verb's USB connector which wouldn't quite make proper contact with the old lead; I have had this happen with mobile phones too. I shall next be looking to see if there's a way inside these drives to take a closer look at the connector. I had also wasted hours trying all the tools: check for errors, defrag, and finally a full scale reformat but hope this might save anyone else all that trouble!

Hmm. You know... that does sound like a serious issue, honestly.

I say this in spite of you saying:

checkdsk doesn't find errors, and it shows as "Healthy" in disk management.

I know this might be inconvenient, but over the course of the next two weeks, make it a point to use that external-drive on another computer as much as possible.

The reason for this is that depending on how much it behaves / misbehaves over the course of the next two weeks, you'll have some idea of how serious the problem might really be.

To wit, if you have the

once in a while (1 time a week), I get the error "An error has occured. The destination you have specified does not exist".

phenomenon occur once or twice during those two weeks, you'll know that the problem might be with the drive and/or it's connection-cable, rather than just the computer it's presently connected.

I've been using it as an alternative to 'Windows chkdsk' (or, whatever it's now called... I'm talking about the 'error-checking' tool that's displayed in the following two image files) for some time now and have been quite satisfied with ther results. 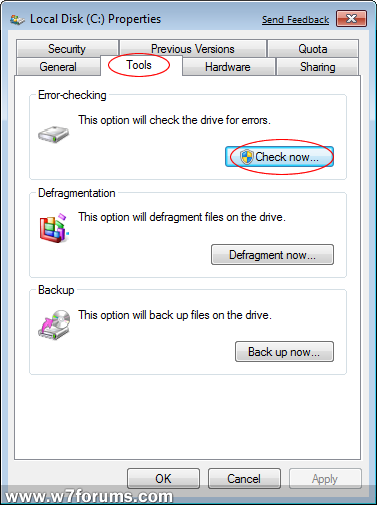 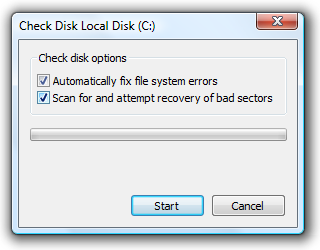 Not the answer you're looking for? Browse other questions tagged windows external-hard-drive or ask your own question.