How Windows uses .inf files to load the correct drivers

What happens when a hardware device matches two or more inf files when Windows is loading the drivers for that devices?

Does Windows search all inf files and load anything that matches?

If so which is the 'primary INF file', what I mean by this in Device Manager when I click on the disk drive and go to the 'Details' tab, and then look at inf name, it shows cdrom.inf file, even though it also matched oem2.inf.

If I then look at my monitor, which also has two drivers for it loaded from two inf files, oem22.inf and monitor.inf. Under 'Details' and inf name, it shows oem22.inf.

Its actually one main driver. The other one you see is a filter driver -- iaStorF.sys, where F means filter.

A filter driver is a Microsoft Windows driver that extends or modifies the function of peripheral devices or supports a specialized device in the personal computer. It is a driver or program or module that is inserted into the existing driver stack to perform some specific function.(wikipedia)

Here is a screenshot of my system, for disk drives, its in 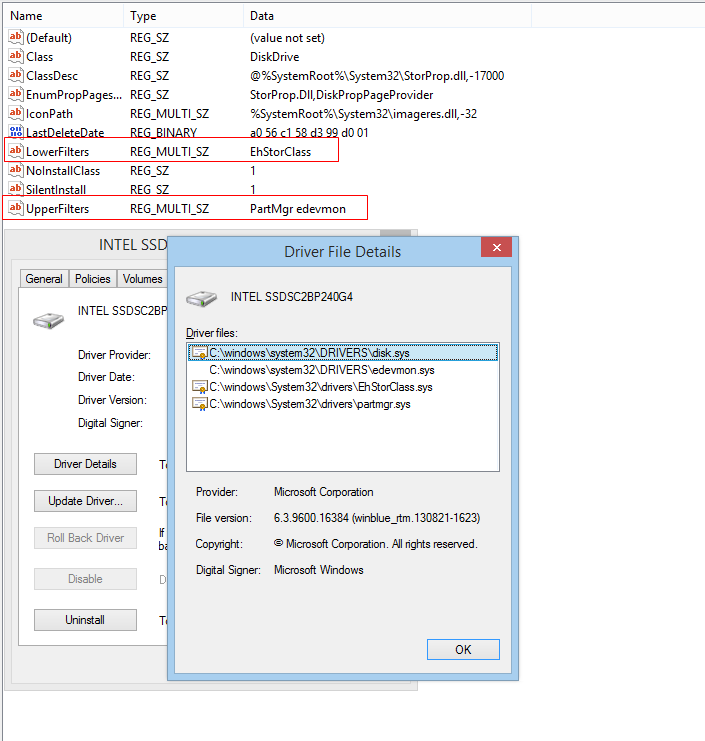 The main driver is disk.sys, the other 3 are all filter drivers, EhStoreClass.sys and partmgr.sys are default MS drivers in Windows 8, edevmon.sys is from eset.

For monitors, the additional inf is optional, used for extending the capacity, like color profile(.icm) or EDID information, these inf are not required for monitor to operate, only monitor.sys is necessary. (MSDN)

Filter drivers are optional drivers that add value to or modify the behavior of a device. A filter driver can service one or more devices. Bus Filter Drivers

For devices described by an ACPI BIOS, the power manager inserts a Microsoft-supplied ACPI filter (bus filter driver) above the bus driver for each such device. The ACPI filter carries out device power policy and powers on and off devices. The ACPI filter is transparent to other drivers and is not present on non-ACPI machines. Lower-Level Filter Drivers

An upper-level class filter driver adds value for all devices of a particular class.

Some information can be found in this old Microsoft article (XP time)
How Windows determines the most suitable device driver to install during Setup :

When you run Windows Setup, you may have more than one set of device drivers or .inf files that work with a particular device. Both Setup and Plug and Play attempt to resolve these conflicts by selecting the device driver that is the most suitable match for the device that is being installed.

It should be noted that by default a 64-bit Windows version will not accept unsigned drivers as candidates. This is only possible in 32-bits Windows.

Windows assigns a rank to a driver that matches a device. The rank indicates how well the driver matches the device. A driver rank is represented by an integer that is equal to or greater than zero. The lower the rank, the better a match the driver is for the device.

A rank is represented by a value of type DWORD. A rank is sum of a signature score, a feature score, and an identifier score. A rank is formatted as 0xSSGGTHHH, where S, G, T, and H are four-bitfields and the SS, GG, and THHH fields represent the three ranking scores, as follows:

For an overview on how Windows Vista and later versions of Windows use a driver's signature to determine how the driver is installed, see Signature Categories and Driver Installation.

This information is specified inside the .inf file, so a manufacturer can order his own drivers.

This text is quite confused and confusing. See the link for a much better description for identifier score.

Not the answer you're looking for? Browse other questions tagged windows drivers computer-architecture inf or ask your own question.

1
How does one extract the Canon ip4600 drivers in inf form?
1
How do you find out the INF file that is being used when you plug in a device in Windows
0
How to INF mod: Replacing 32bit dlls with 64bits
1
Why does Windows not recognize the INF file for my device
1
windows 7 Slipstream drivers to the install dvd/iso
2
How to check inf manufacturer
0
Install Samsung Android Note 2 MTP INF driver for Win XP in to Win7 - Win10 is using the same exact driver?
5
Find corresponding .INF file for device driver
0
powershell : get the inf file name of a device
3
Problems with Velleman PCSU200 drivers, “The required section was not found in the INF”