Windows Explorer will not MOVE documents, only COPY

I am using Windows 7 Home Premium, Service Pack 1. Looking at Windows Explorer, I have a folder with multiple documents (.doc, .xls, .pdf). I want to MOVE the documents into subfolders. (I know how to copy/move documents.)

3 -- I tried to CUT/PASTE the documents from the flash drive to folders/subfolders on the computer and the same thing happens. The documents go into the subfolders where I put them, but they are also automatically copied to the main folder.

Do you have any idea what is happening and what I can do to fix this?

You said that you are trying to move from a USB flash drive to your computer - these are two different drives and copy is the default behavior for Windows for different devices.

Windows only moves the folder by default if it is the same device, like moving a folder from C:/Users/../Documents to C:/Users/../Pictures.

There is an easy shortcut to workaround this, which I use regularly.

Please note that there will be an overlay that tells you what you’re doing, that changes depending on whether you're holding Shift, Ctrl, or Alt. Watch me move a folder from the C:/ drive to the D:/ drive by holding the Shift key: 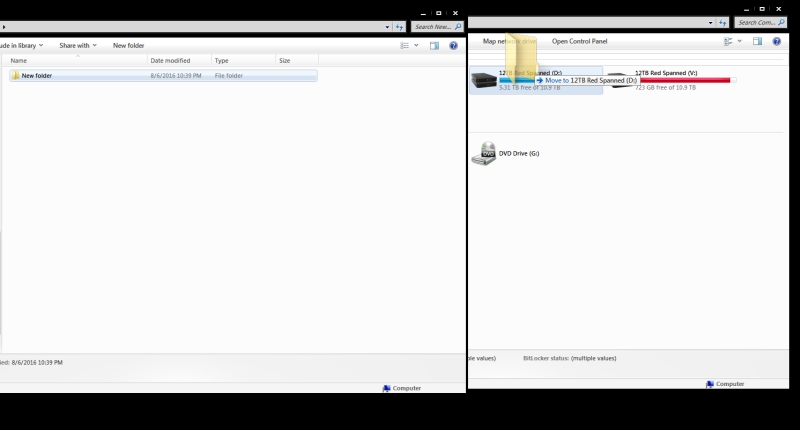 In the third example you gave you said that you tried to copy and paste, but the folder still remained on the USB flash drive but also copied to the new device. In this case it sounds like you don’t have the proper permissions, that is, the device is read-only for example, or the folder is read-only. You can copy a read-only folder or files from a read-only device but if you try to move or delete the folder you can’t.

Not the answer you're looking for? Browse other questions tagged windows-7 windows or ask your own question.

1
Why does my file copy silently fail on explorer on Windows Server 2008 R2
2
Windows Move Command: Odd 'Access Denied'
0
Undo move and undo copy not work window explorer
2
Copy/move certain file types from subfolders to a common folder
4
Batch file FOR loop to copy folders only if they exist in another folder