Ubuntu installation on USB flash drive will not boot

Bootloader installed in ESP so that UEFI will recognize it.

After installing this way, ASUS x205ta failed to boot Ubuntu from 2nd drive.

I'm guessing since the UEFI is 32-bit, I should also copy the BOOTIA32.EFI that I used to recognize the first flash drive also into ESP in the second flash drive.

However, I cannot access this partition. It doesn't have any format. 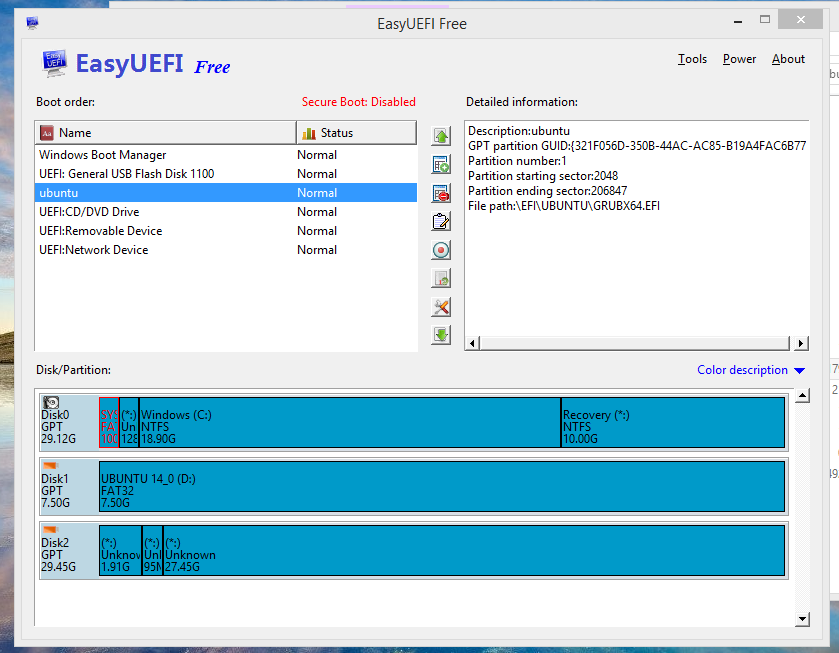 'Disk2' is the 2nd flash drive where Ubuntu is installed. For some reason all the partitions do not have file format. ESP should be the smallest partition among those three partitions but since it doesn't have any file format I can't even access it to copy/paste BOOTIA32.EFI.

How can I get this Ubuntu flash drive bootable?

I solved it. sorry for bothering who read this.

To start, the ESP was actually formatted as FAT32. I checked this out with sudo parted -l.

I don't know exactly what the contents of BOOTIA32.EFI are but I was able to copy this file to the ESP. I did this from the live ubuntu which is booted from the 1st flash drive.

From there I could use 'parted', 'mount' commands to access the partitions in the second flash drive. For example, assuming the 2nd flash drive is '/dev/sdb' and the ESP partition is the second one in line, then '/dev/sdb2' would point to ESP.

Then from home directory I could do the following

actually, I didn't directly copy the original bootia32.efi file to /dev/sdb2 but first copied to local machine and then copied that to usbmount/efi/boot directory (2 steps). This was because for some reason I ran into a permission deny. But I guess if you're lucky 1step copying would work.

reason for creating EFI/BOOT directory in ESP is due to UEFI conventions. I read this here(quite long. related info somewhere in the middle):

After doing this and rebooting with the modified 2nd flash drive, I was able to get GRUB 2 running! Unfortunately it didn't give me a grub menu with entries that would load ubuntu. It just gave me a bash terminal to work with. From here, I referenced this link to actually load ubuntu. And it worked!

Not the answer you're looking for? Browse other questions tagged ubuntu boot partitioning uefi or ask your own question.

0
Create a Read-Only Partition on Flash Drive
0
UEFI DUET does not boot Ubuntu 12.04
2
Ubuntu 14.04 installation on Asrock H77M UEFI, dual boot with windows 8.1 already installed
0
How to put /boot on a flash drive?
1
boot loader(GRUB) not recognized in partition along with windows boot manager
0
How to install GRUB2 on a USB flash drive to boot into Linux Mint on HDD in UEFI mode?
1
Why can I boot from an NTFS USB flash drive?