Option to Turn Bluetooth on or off is Missing

I want to disable Bluetooth on my laptop running Windows 10 Pro x64, but I have a problem: the option to do so is missing even though I know that it was previously available.

Here is the Bluetooth settings pages should look like on Windows 10: 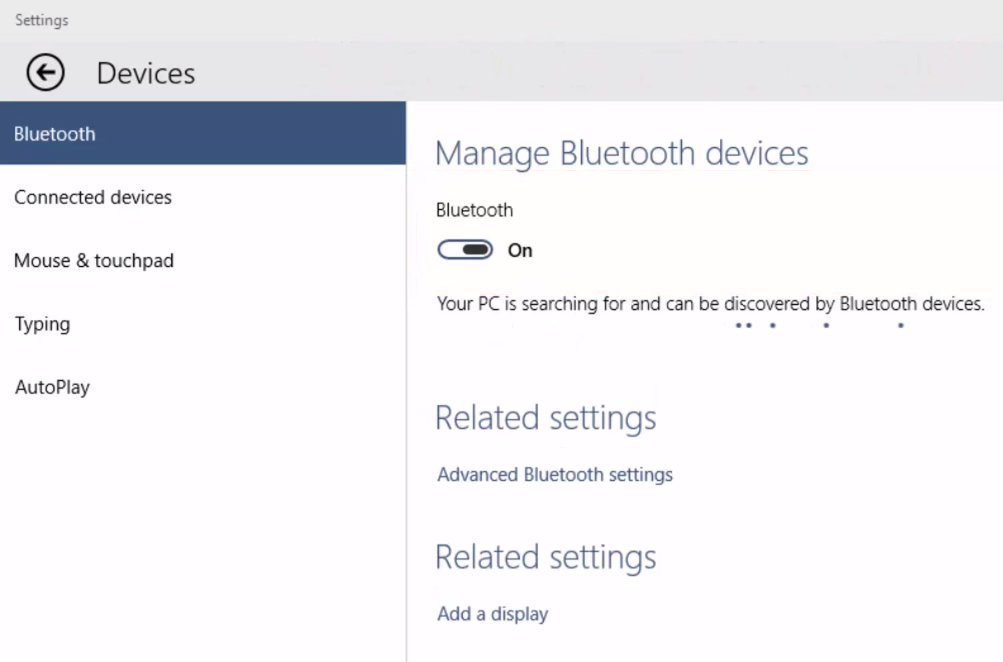 Here is how it looks for me:

As you can see, I am missing the switch to turn it on or off? Why is it missing? I know that just yesterday, it was available and I turned it off. What can I do to fix it?

I found a solution that seems to work for me.

1.) Uninstall everything that is Bluetooth-related that is listed in Programs & Features.

2.) Uninstall all Bluetooth-related drivers listed in the Device Manager.

3.) Restart the computer. Bluetooth will be reinstalled, and you can reinstall the programs that you removed from Programs & Features.

The problem is mainly because the drivers provided by vendor does not support windows 10 (this happens if you have migrated from windows 7 or windows 8.1). Reinstalling the bluetooth driver (Programs and Features)only would solve the problem.

There are all kinds of problems that can cause this, judging by the amount of solutions I've found. Only one worked for me, so I'm adding this here.

I have a Dell XPS 13 9350 and had to do a reset of the BIOS to fix this. No idea what had changed in the BIOS, but multiple restarts didn't help. After resetting the BIOS to Factory settings (not BIOS Defaults, but I didn't try that), Bluetooth worked as expected again.

I found an easy fix that worked for me - turn off windows 10 fast-startup and then turn off your computer then on again. steps:

Most of the solutions here did not work for me. In my case, my laptop had an Intel Wireless Bluetooth driver. After searching for that, I ended up on Intel's website and downloaded the latest version of the driver. After running the executable and doing a "Complete" install, I restarted my machine and the Bluetooth switch returned to the Settings window.

Note, when I tried updating that same driver earlier through the Device Manager interface, Windows incorrectly told me that my Driver was the best and most up-to-date one already.

I just went into network connections and selected bluetooth then above that in the options selected disable and that disabled it.

Another thing to consider, if you have a spare WLAN adapter / card for your laptop. You can also try to exchange the cards. Check if the Bluetooth afterwards works. Strangly for me it did with my old adapter as soon as I booted into Windows again. So I disabled Bluetooth, turned of the computer and switched my other one (previously not working) back in and it started immediately working again. The switch for turning on Bluetooth was showing up again and it was also listed in the device manager.

I tried most of the above listed suggestions but none did help or brought it back to life. However the quick swap did some magic. This seems to be a bug within Windows 10 because I'm pretty sure this wasn't a connection issue since the WLAN worked flawlessly. Another thing to note is that a driver update of either the WLAN or Bluetooth broke the Bluetooth functionality.

So if you have a second one lying around and don't want to tinker with software methods which probably won't work if you your adapter disappeared in the device manager try this out. It might be a quicker fix.

Maybe it is also enough to remove the adapter startup Windows, shut it down and put in the adapter again. I haven't tried that, but this might also be worth a shot.

Not the answer you're looking for? Browse other questions tagged bluetooth windows-10 or ask your own question.