After running the Windows 10 Pro upgrade from Windows 8.1 Pro, things appeared ok for a while. Then I ran into some trouble with VPNs -- while connected to the cisco AnyConnect vpn I could not see the rest of the internet, only the remote networks at the other side of the vpn. (While on 8.1, I had split horizon, no trouble.) At this point I made several mistakes:

The next thing I knew, I'd lost all network access completely. The (wired, not wireless) network adapter showed as "disabled" in the "Network Connections" window. The Enable button tried to do something, but nothing changed. The Diagnose button reported that troubleshooting was unable to automatically fix anything; the details showed this interesting message:

The Properties window of the connection is even weirder; the "Connect using" dropdown that normally shows the hardware name is blank, as is the list of protocols in "This connection uses the following items"; and "Install", "Uninstall" and "Properties" buttons for the protocol list are all grayed out! 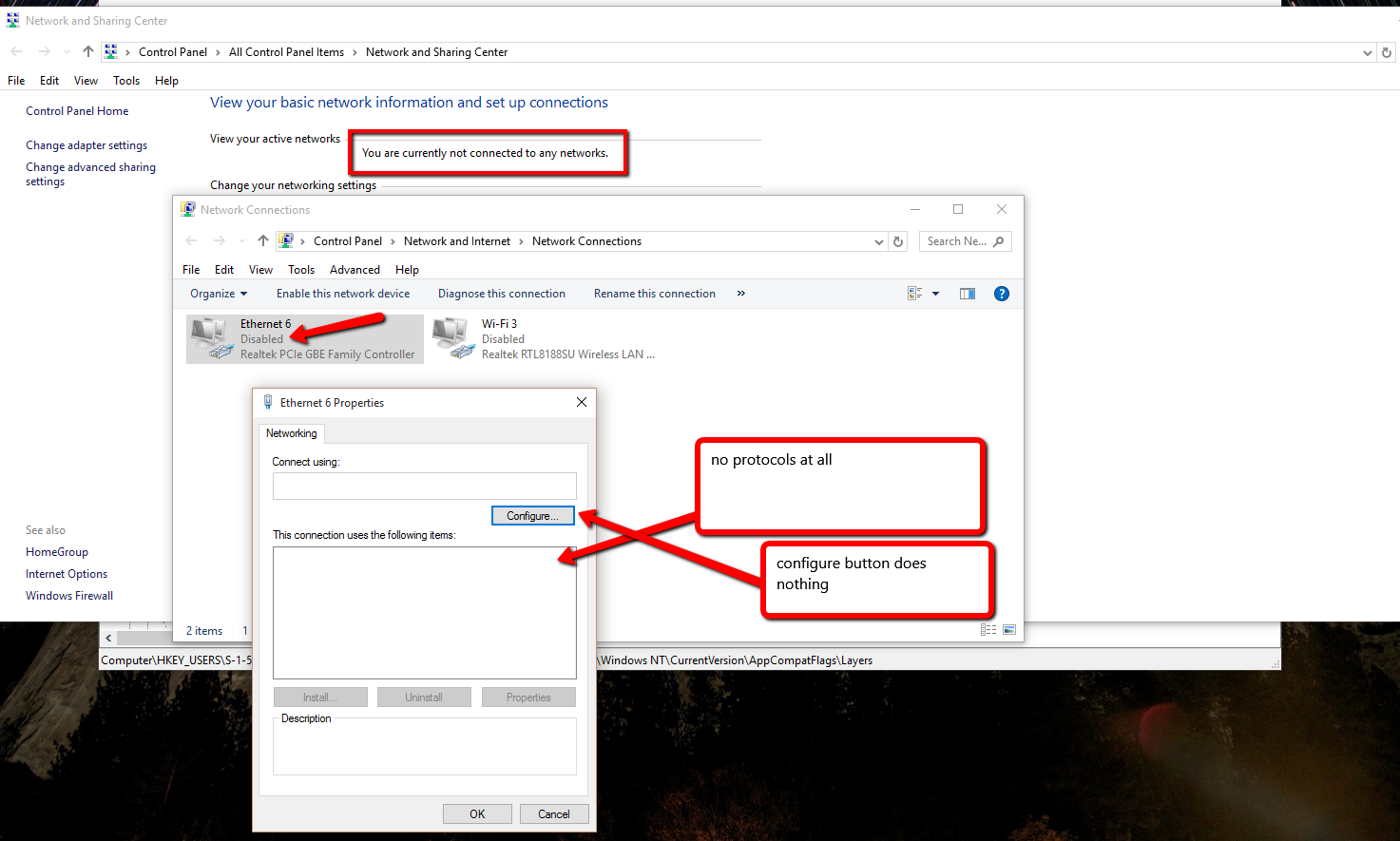 From here I tried these things:

My next move is to take a full backup of the machine as it is now, then do a full clean install of either Windows 8.1 or Windows 10 onto a wiped drive. I'm hesitant for obvious reasons; I won't lose any important files, but it will set me back quite a bit of time in reinstalling stuff. So this is my last hope.

The Cisco VPN has not yet been updated for Windows 10 and is incompatible with the OS.

Microsoft has shared a KB that should fix this. the KB can be found at https://support.microsoft.com/en-us/kb/3084164

I also had this problem after upgrading to Win 10 from 8.1 and i figure it out; My mistake was disabling some new services brought with win 10 or services that were disabled on my win 8 installation.

Check if the service "NetSetupSvc" is started and set to "manual start" (default) and not disabled.

You can also check from the service manager (my system is in french the service is named : "Service Configuration du réseau")

Check the windows logs while you opening the network card properties to track where the problem is coming from ;)

I gave up and backed up, then reinstalled, from a burned ISO. Deleted every partition on my SSD drive.

I had this same issue. It started happening after an unfortunately timed power outage about an hour after my upgrade to 10. I tried many different things to solve the issue, but i could barely find any evidence that anyone else has had similar problems. In the end I used the Win10 iso to upgrade my OS again (upgrade from win 10 to 10), and it resolved the problem.

20
Cisco VPN Client hangs at "Opening cert store"
3
Manually Setting Interface metric priority of Network Adapters not preferring lower metric route on Windows
1
Prevent resolve.conf from being overriden
7
Setting up networking on Virtualbox Guest to access Host VPN
3
Windows 98 networking doesn't work in QEMU
6
Connect to VPN without Cisco AnyConnect
1
What are the risks of changing LAN network ID from 192.168.0.X to 100.100.0.X?
1
VirtualBox networking for both VPN and internet