We're renovating our house and putting Ethernet ports in each room. They're all running to a 12-port patch panel in the office, but clearly we're going to need a different router/switch in order to plug them all in.

So the question is this: What should we get? We want to keep the wireless capability, but I'm having trouble finding any 8-port wired switches that also have wireless (and that fit into a home budget). I imagine it should be possible to plug an 8-port switch into 6 of the patch panel ports, use 1 of the remaining switch ports to connect to the cable modem, and the last port to connect the old wireless router in some capacity... and then we can plug the 4 ports on the wireless switch into 4 of the panel ports (leaving 2 panel ports unused, but that's fine for now). I thought I had a grasp on the difference between a switch and a router, but everyone seems to play fast and loose with the terms, so two different people saying "switch" might mean two radically different things.

Anyway, unless someone knows of an affordable 12-wired-port-plus-wireless switch/router, anyone got any advice?

A router generally assigns IP addresses via DHCP, and does DNS and gateway functions. Routers typically have switches built in (as is the case with your current wireless router). A switch only forwards packets (in simple terms).

Think of it this way: consider no internet connection, a local only network. With two computers plugged into a router, you can just get to the other computer by typing \\othercomputer in your Explorer address bar. With the same two computers plugged into a switch, you're not going to be able to talk because there are no instructions to tell the switch where to send the packets.

Now to the real question: 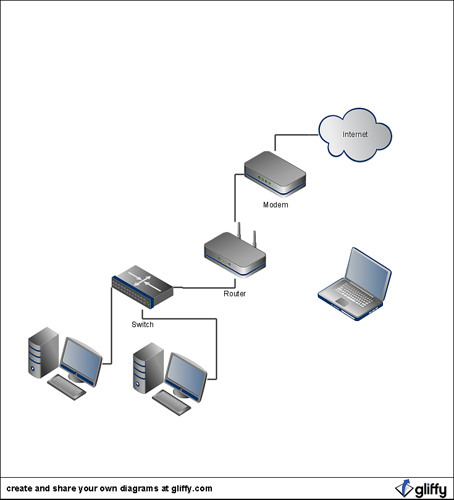 For an 8 port, I like these Netgear switches. I use them frequently for small networks at work. Next step up is this 16 port model.

In any case, I would go for a Gigabit switch because pretty much all new computers have Gigabit NICs. If you're transferring movies from your desktop to your media center, you will definitely appreciate the higher throughput.

I don't see why you can't keep the wireless router and use a switch along with it. You can grab a simple SOHO switch to use with the patch panel. The one linked to has 16 ports and should suffice for future expansion. I don't see why a wireless switch is needed unless there is an extreme distance between the current wireless router and where you plan to use the switch. If that is the case, you could grab an inexpensive Wireless AP to go along with it.

Not the answer you're looking for? Browse other questions tagged networking router wireless-networking switch or ask your own question.