One login feature of Windows 10 is that it allows you to log in with a PIN instead of with your password. This is especially useful for those of us who have complex Microsoft Account passwords but just want to discourage casual laptop use by other people in the home/office.

While the PIN defaults to be numbers only, the Windows 10 Preview builds had a checkbox to turn off "Simple PIN" mode and allow the use of letters and symbols in the PIN. In the preview builds, I used this feature.

I can't seem to find this checkbox in the Windows 10 release. Did they move it somewhere else, or remove it entirely?

My Windows 10 testing Virtual Machine, which already had a complex PIN (with letters) set when the Preview was installed is continuing to use that PIN now that it has upgraded to the full version. However, on my laptop which has been upgraded from Windows 8.1, I can't seem to set it.

As discovered by @Ramhound, the feature was removed from build 10162.

Complex Pin is not present in the latest Preview builds. 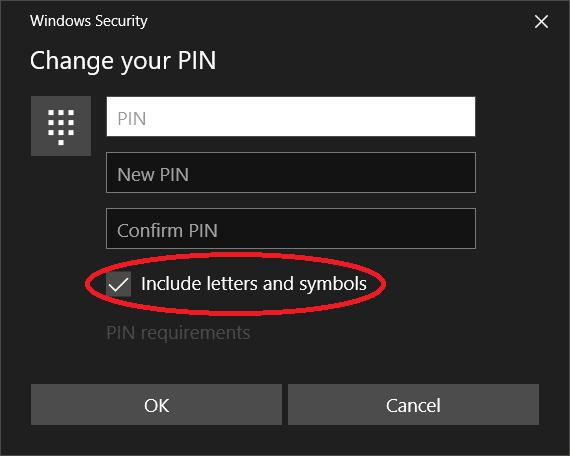 Not the answer you're looking for? Browse other questions tagged login windows-10 or ask your own question.

0
Can't login after upgrading to Windows 8.1
7
What is a Windows build string and how to locate it?
1
Windows incompletely shuts down after heavy use
13
Fontlink (FontLink/SystemLink in registry) Is Not Working As Expected In Window 10 x64
42
How do I disable Windows 10 login prompt to set up a PIN?
2
How to ssh into a passwordless (Windows Hello) Windows computer?
0
Left Insider Program but still receiving Insider updates