On my Windows 7 computer, I was able to right click on icons on my taskbar to unpin them. 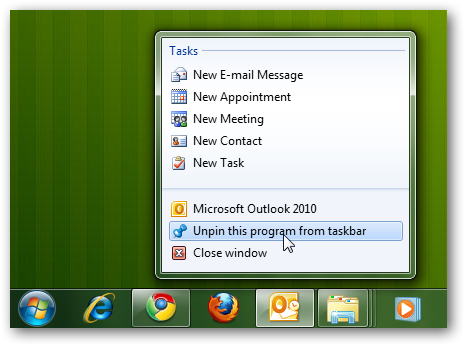 I just upgraded to Windows 10, and I could have sworn the right click menu was working when I first installed it, but now when I right click on taskbar icons (or click and drag upward, which used to work on windows 7) no menu appears.

Everything remains perfectly responsive, I can open and close applications lightning fast, and I can right click on the taskbar itself to change the properties for example, but just not on the icons themselves.

Did I break something? How can I get it back?

Press Ctrl+Shift+Esc then locate Windows Explorer in the windows processes. Right click it then select restart.

(Upped my comment to an answer because the current alternate answer kills Explorer windows in the default configuration.)

I've found restarting the "Tile Data model server" service restores the functionality, but it fails again somewhat quickly for me. It seems like it is best to try right clicking on another taskbar button first, before attempting to get the menu you wanted.

Choosing this service was based upon a Microsoft forum post, but I can't find it again at the moment.

(I have the XMouse equivalent setting, which was faithfully kept in the Windows 10 upgrade except for the Desktop registry entry "ActiveWndTrkTimeout", which caused some issues with moving from the Taskbar itself to its various "menus" other than the start menu.)

And since a Windows Update, although it's still happening, you can simply click on the Start menu and all seemingly blocked right-click menus, and the Action Centre notifications, appear with the Start menu behind.