I have disabled (uninstalled) Hyper-V so I can run VM-Ware and have completely lost the network. It shows the cable connected but there is no internet connection. Ive tried a different cable and have reset my switch and router with no success. If done the netsh commands to reset the ip, ipv4, ipv6, winsock and I have killed the two winsock keys in the registry. Was unable to edit the nettcpip.inf file - access was denied (even after running notepad as administrator).

I am running out of internet searches and ideas. Does anyone have an idea of what I need to do (short of re-installing windows)?

I uninstalled all my Network adapters in Device Manager and then I right-clicked and chose Scan for hardware changes and my existing/standard adapter came back and was working right-away.

I had a similar problem after removing Hyper-V, and resolved it by reconfiguring my netowork adaptor. I had to do this because I discovered the netsh commands had left things in an invalid state.

According to, to pick one example of many, this blog, the following netsh command "Removes all user configured IPv4 (Internet Protocol version 4) settings": 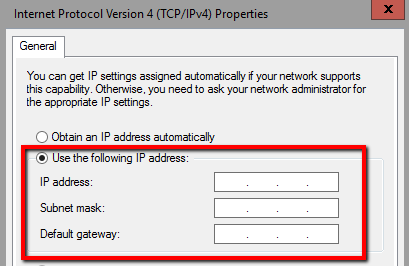 Once I re-entered my static IP settings, the yellow triangle disappeared and the network came back.

To satisfy myself that netsh had really done this, I repeated the whole exercise, adding and removing Hyper-V, and exactly the same thing happened when I gave the above netsh command. It seems netsh is somewhat buggy. Its use for TCP/IP functionality should anyway be viewed as deprecated: while looking at the netsh commands I noticed advice to this effect from Microsoft, which doesn't show up when full netsh commands are used, but only when you go to the "int" (interface") level in netsh:

I finally ended up restoring from a restore point. I am sure there is something else that can be done instead, unfortunately, I needed the network on that computer immediately.

Here are the step that finally worked for me:

Not the answer you're looking for? Browse other questions tagged networking hyper-v tcpip windows-10 or ask your own question.