Use Media Keys for Soundcloud, YouTube, etc.. in Firefox?

I'm using Firefox in version 39.0. My keyboard has Media Keys and I want to use them for controlling sites like Soundcloud, Youtube, etc.

The Media Keys add-on does not work in Firefox version 57, because the developers have decided to remake Firefox into a Chrome clone. For November 2017, they have announced their intention to drop in Firefox 57 their current add-on format, now called "Legacy", in favor of WebExtensions, which in plain English are very similar to Google Chrome extensions.

This will in theory open most of the Chrome Store to Firefox users, but will invalidate all, and I do mean all, current add-ons whose developers will not convert in time to WebExtensions.

One can already see the problem in Firefox 56 by opening the Add-ons tool. The add-ons that will not work in version 57 are marked by a yellow LEGACY notice : 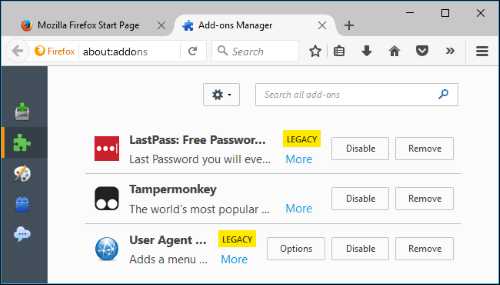 I have 46 add-ons in Firefox with which I have created the environment that is just right for me. All of them, except only one, are marked as legacy. The problem is much more general and extensive than you think.

Some possible solutions are listed below :

None of these solutions is perfect, but I don't know of a better one at the moment. I think that the Firefox developers made a very stupid decision which will cost them a hefty chunk of their already eroding market share, but they are not asking for anybody's advice.

Another solution would be to use Chrome extensions in Firefox 57. The add-on Chrome Store Foxified already allows this.

From the article How many Chrome extensions will run in Firefox :

Mozilla's Andy McKay decided to find out in November 2016. He parsed the Chrome store sitemap and got 100,000 extensions, apps and themes out of it which he analyzed to find out how many of them will run in Firefox.

According to his findings, about 76% of Chrome extensions of the sample size will run in Firefox. The remaining extensions either miss one or more APIs, one or more permissions, or one or more manifest.

I have found the Chrome extension Streamkeys which according to its author does everything you asked for. However, not having Firefox 57, I don't know if it will work in it.

A very light-weight solution for all browsers and versions, makes use of the following observations:

Specifically for youtube, a list of the hotkeys can be found in the article 30+ YouTube Keyboard Shortcuts You Need to Know. Some of the ones corresponding to the keyboard media keys are:

These keyboard's media keys can be mapped to these keys using AutoHotkey. A list of AutoHotkey key-names is found in the article List of Keys, Mouse Buttons, and Joystick Controls.

An example of a AutoHotkey script for Youtube is:

The above script is completely untested, as my keyboard does not have these keys.

Yes it is possible! For this download Media Keys from addons.mozilla.org. This tool adds a media key event listener to Firefox and makes it possible to use:

on every supported music/video site.

For some reason the media keys are only working if Firefox is the active window (occured on Windows 10). Also add-on currently does not work with Firefox 57+.

Just leaving this here for the next person that will be in the situation I was half an hour ago. After searching around a bit I found this document linked from the Mozilla bugtracker, and it turns out that the latest version of Firefox support the MPRIS interface over D-Bus, which means that after messing around a bit with d-feet I managed to achieve my desired results!

Using i3 under Arch, I successfully set up hardware key play-pause for firefox by:

ps.: I also recommend increasing the value of media.mediacontrol.stopcontrol.timer.ms on the about:config page, because by default you can only restart playback in the next 60 seconds after you paused. Increasing it to 1000000000 milliseconds from the default 60000 will give you around 11.5 days. :P

Currently the Firefox commands API does not support media keys nor global keys.

Until these issues are fixed by Mozilla, you can use Chromium with the Streamkeys extension.

Setting media.hardwaremediakeys.enabled to true on the about:config page The default was disabled here for some reason. Using Firefox 80, should work also around the 70s.

Not the answer you're looking for? Browse other questions tagged firefox keyboard youtube or ask your own question.

81
Is there any way to control Youtube through the media keys on the keyboard?
5
Use MPRIS/dbus media commands within Firefox on Linux

81
Is there any way to control Youtube through the media keys on the keyboard?
5
Assign custom keys to keyboard media buttons
164
My keyboard has no "media" keys; can I control media without them?
2
Media keys replaced by F#, how to fix?
5
Use MPRIS/dbus media commands within Firefox on Linux
7
How to Disable control of Youtube with Keyboard Media Keys
0
Firefox not displaying thumbnails for YouTube and eBay