Windows 10 - No connections are available

I just updated my Windows 8.1 Pro to Windows 10 in my laptop. Everything is working fine except for the WiFi adapter. It doesn't scan for any available WiFi networks. When I hover it, it says "No connections are available"

I can only connect to the internet via Ethernet. I have tried to update my wireless network adapter. I also tried to use other network adapter(Update Driver Software > Browse for software driver in your computer > Let me pick from a list of device drivers in my computer). The result is still the same - no connections available.

The driver doesn't show a exclamation mark. The device status shows "This device is working properly.".

In the events tab, it shows this 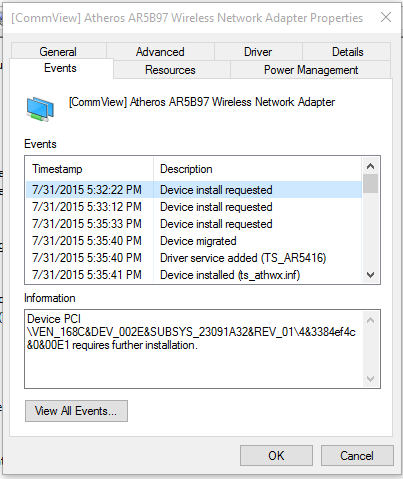 Please help me ASAP. I don't wanna bring my laptop, my laptop charger and a chair and sit beside the wifi modem...

If you did an upgrade, the driver for the Atheros AR5B97 was taken from your previous Windows installation. This driver sometimes does not work in Windows 10, showing exactly the symptoms you described ("device working properly" and no WiFi connections).

Here is what I did to remedy this problem:

(not sure if really necessary but it was a hint from the net):

Delete all keys below [HKEY_LOCAL_MACHINE\SYSTEM\CurrentControlSet\Control\Network{4D36E972-E325-11CE-BFC1-08002BE10318}] in the registry (after backup, of course). Reboot. Windows will restore those entries with default values.

UPDATE: This driver works as well.

BTW: Thank you very much qasdfdsaq for your comment to the initial posting. Seems that CommView somehow was surviving the upgrade to Windows 10 although the setup denied preserving any apps. Uninstalling all remnants of the CommView driver as described above seems to be the cure for that problem.

Atheros has not released Windows 10 drivers for the AR5B97 yet. Their driver download page will be updated with a link when those drivers are written and tested. Until then, try downloading the Windows 8 drivers from that page and installing them with Device Manager.

If you have a spare identical machine, it might also be worth trying a fresh (not in-place upgrade) installation of Windows 10. In-place upgrades have a habit of breaking device drivers.

I had the exact same problem, after upgrading from Windows 7 to 10. All that was the problem I think was an out of date WiFi adapter, nothing complicated. In Device Manager the WiFi adapter's entry had an exclamation mark next to it. All I had to do was update it and it was a matter of seconds before I was connected again to the Internet (no messing around in the registry or anything).

Not the answer you're looking for? Browse other questions tagged wireless-networking windows-10 or ask your own question.

0
Wifi doesn't work under Windows 7
5
Why am I regularly disconnected from my WiFi every few hours?
0
Windows 10 - WiFi periodically disconnects from university network
1
Wifi not working on Windows 10
0
Network stopped working on my PC after an attempted Windows update was rolled back