Is there any way to make taskbar icons bigger in Windows 10?

So after Windows 10 installation I've noticed that icons in taskbar became a significant bit smaller than they were in Windows 7/8 while taskbar height stayed the same, here's the comparison:

The reason for this is probably addition of the blue line below + some spacing for it, however for icons it results in almost 30 percent change in size which is a bit less than my comfort level at least currently. However the only option I've found is:

Which is of course making them even smaller. So I'm asking for any possible ways including registry hacks to make them bigger. I've tried some old hack which mentions MinSize registry value however it doesn't seem to affect the taskbar in Windows 10.

You can use 7+ Taskbar Tweaker.

Install StartIsBack++, it has an option to use larger Icons. 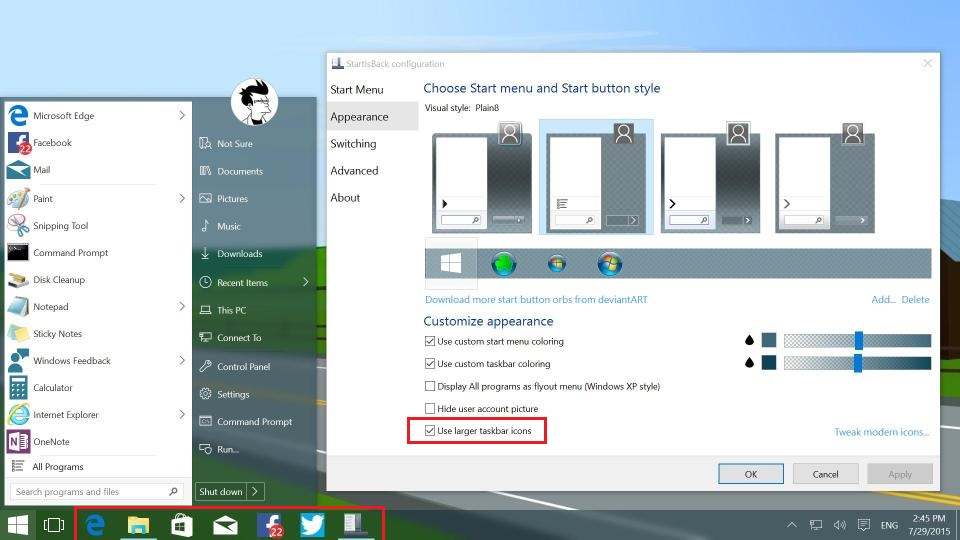 To add clarity to the other answer relating to 7+ Taskbar Tweaker (http://rammichael.com/7-taskbar-tweaker-v4-4), to access the advanced options you will need to right click on the icon in the system tray and select "Advanced Options". Near the bottom of the list is "w10_large_icons". Simply right-click on the 0 beside it and modify it to a 1, apply the change and the icons will be reverted to their proper size. Note that this feature is only available in the beta version of the program at the time of posting.

Try this:
1.Go Into Settings
2. Click Display
3. Locate the 'Change the size of text, apps and other items:' slider.
4. You can move that up to your liking. Make sure to sign out and sign back in again for the changes to affect everything.

Not the answer you're looking for? Browse other questions tagged windows taskbar windows-10 or ask your own question.

1
How to reduce the size of the windows icons in the xfce4-panel taskbar?
1
Setting the view of the toolbar to Large icons creates a gap in the Windows 7's taskbar
6
Is it possible to align Windows 7 taskbar buttons?
0
Icons Disappear Hovering Over TaskBar
12
Make taskbar icons' size bigger/smaller than options given Win 8.1
0
Annoying white arrows on the taskbar icons area. Windows 10
2
How to make the Start button smaller when "Use small icons" is enabled for the taskbar
10
Windows 10 resets taskbar height to single row after restart
1
Windows 10 Taskbar icons are taking over the Taskbar, cannot hide them