Some start menu shortcuts are missing on Windows 10

Not sure when this started happening but some time after upgrading to Windows 10 I noticed some of my search results were not showing up with what I wanted. For instance, when I searched for Word 2013 or Skype, I did not get any results. I decided to investigate and tried rebuilding the indexing file and moving it to a new location but it made no difference.

So I checked my start menu and manually tried looking for the shortcuts only to discover that they strangely weren't there. Also notice how some of my tiles have suddenly disappeared. 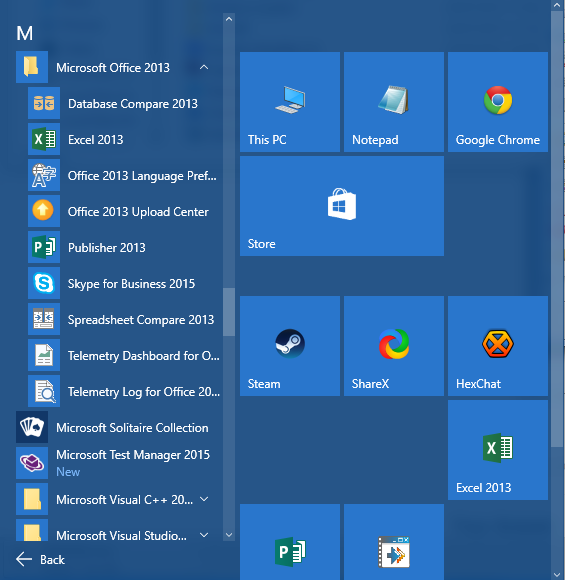 Strangely enough when I browse the actual location of the start menu folder, the shortcut for Word and Powerpoint are there.

I've checked that none of the folders/shortcuts are hidden or read-only and that the files/folders have sufficient permissions via the Security tab.

Any ideas how to solve this?

At the current moment the start menu is limited to 500 entries in the database. This also affects search and Cortana as they both rely on that DB.

There is currently no known fix other than going to your start menu folder and deleting links and folders to apps not used.

Edit: On 2015-09-19 they released a technical preview that lifted that limit to 2048, which is nice. It should be pushing out to Insiders and will trickle down to standard users soon enough.

I had a similar problem after upgrading.
I was able to fix it by:

I'm not sure what caused Windows to see some as hidden and others not, but this reset the flags and everything is visible on the start menu, now.

I can confirm that this is a major flaw. Some people in Windows Forums are reporting that it happens to them with even less shortcuts/entries. We just have to hang tight for right now unless you want to explore third party options.

I found out a peculiar behaviour which causes an instance of this problem.
My findings are for build 1703, and I cannot, at the moment, verify them on more recent builds.

I had a shortcut inside a menu folder which would not show up, no matter what.
In the end, I discovered that the Start Menu hides duplicate shortcuts that point to the same file. Suppose you have a shortcut named Shortcut-A at the root level of the menu file structure (C:\ProgramData\Microsoft\Windows\Start Menu\Programs) which points to c:\someprogram.exe.
Now suppose you have a copy of Shortcut-A in a menu folder e.g. C:\ProgramData\Microsoft\Windows\Start Menu\Programs\SomeFolder.
In the All applications list only the copy at root level will be visible. You can find the folder SomeFolder under the letter "S" in the list, but the shortcut will not be visible under it.
Furthermore, this happens even if the two shortcuts have different names, but point to the same executable. In other words, if, in SomeFolder, you have Shortcut-B pointing to c:\someprogram.exe it will not show up as well.

In my tests this can be reproduced systematically and the Start Menu immediately updates itself after creating/deleting copies of the shortcut, with no need to touch the menu database files.

I've had issues with the new Win 10 start menu on several workstations after upgrading from Win 7. Here is a batch file I use to rebuild the start menu:

Not the answer you're looking for? Browse other questions tagged windows windows-10 start-menu or ask your own question.

5
Windows 10 Start Menu not showing all shortcuts?
1
Start menu problems even with less than 500 items