sum rows and columns depending on two values

I got the following table in Excel (Microsoft Excel 2011 for Mac).

Question: I made the second table just as an example (manually). But how to do this with Excel?

Remark: Each person has two columns. One contains the planned hours, the other one contains the currently spent hours. I could remove that second column if necessary. It's more important to sum the work-packages and departments. 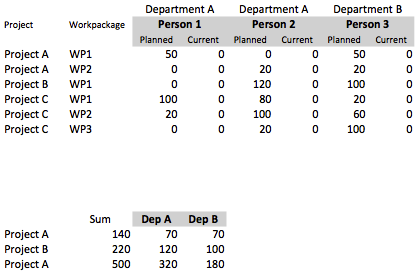 1
Excel: How to extract group of the same rows and their values into columns?
0
How to correct floating point round-off error in Microsoft Excel for Macintosh 2011?
2
How to categorize text data based on a value in a column?
0
Matching and returning values to populate column
0
lookup several values in a table and return the sum of those values
0
How to combine the totals of four sheets into one
4
excel How to sum total working hours with positive and negative time
0
Summing values based on column and row titles
0
How to group similar rows in Excel, and total the values of each group?