I'm trying to delete an executable, but it fails with the error Access is denied even adding /F to force it as del /F system.exe. I'm using an elevated Command Prompt.

Attempting to delete the file through Windows Explorer yields the following: 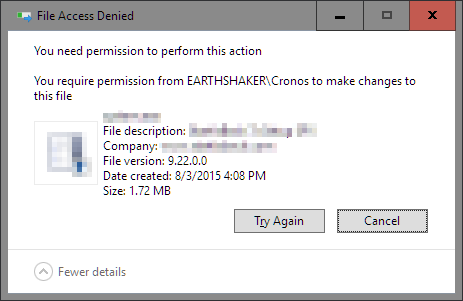 I went into the Security properties of the executable. Highlighted are the odd permission entries which may be stopping me from deleting this file: 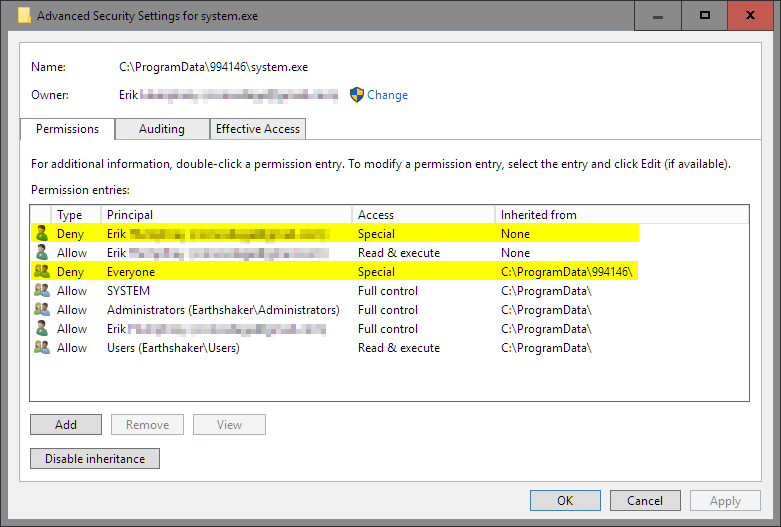 Originally, it did not let me delete the entries; the option was greyed out. I performed takeown /F C:\ProgramData\994146\system.exe, deleted the entries, added ones which gave me full permissions, and closed the dialogue box. The error persisted. When I reopened the Advanced Security Settings, the entries were back.

The parent folder of system.exe, 994146, is completely invisible in ProgramData. I have "show hidden files" on ProgramData. I had to manually type the path in Windows Explorer's address bar. I am also not sure how to edit the properties of 994146 since I can not select it in the file hierarchy.

If this doesn't work, then break out the fire:

To Delete a specific file:

Note: Make sure to change <FILE-PATH> to the full name of the desired file.

Note: Make sure to change <FILE-PATH> and PC-NAME\USER-NAME accordingly (don't miss the :F).

This is my "chown.bat" (unix folks will laugh at me using that name). I've cobbled it together from various solutions... Each time one doesn't work, I add more stuff. The SetACL stuff I only discovered in 2014 or 2015. This has never failed me:

SetACL is a 3rd party utility that needs to be in your path.

In my case, the solution to this particular problem was to run Kaspersky's TDSSKiller; it may have been a trojan. Unfortunately, I'm not sure specifically what TDSSKiller did to remove the affected file.

Not the answer you're looking for? Browse other questions tagged windows command-line windows-10 malware-removal or ask your own question.

465
How can I remove malicious spyware, malware, adware, viruses, trojans or rootkits from my PC?
6
Is it necessary to suspend a process before terminating it?

1
How to diagnose "Windows cannot access the specified device, path, or file" error?
2
Delete a folder with no owner in Windows 8.1
1
Creating a C++ executable locks the file for some time
0
Cannot gain access to second drive (SSD)
1
Can't Delete Font Files #2