What causes the “Scan to computer is no longer activated” error message?

I have an HP 8620 all-in-one wireless printer, which has worked like a champ for months under Windows 8.1 and Linux. I recently upgraded to Windows 10. My wife is still on Windows 8.1, and she is seeing this problem as well. All computers can still print to the printer.

However, both the Win 8.1 computer and the Win 10 computer have started showing messages about "Unable to scan computer - printer disconnected." These message show up periodically on both computers, and are rather annoying.

One post I found suggested it had to do with the printer going into some sort of power saving mode. That doesn't appear to be the case, as the printer was on, and able to accept print jobs, and I was still seeing this message pop up.

I've tried updating the drivers from HP, no noticeable change.

How do I clear whatever status is making the computer think this feature is no longer working, or at least shut up the warning about it?

This is for Windows 10. Open task manager, go to Startup, scroll down to "scan to pc activation app", right click on Status "enabled", choose "disable", reboot...worked for me.

I have a HP Officejet Pro 8600 and one can disable Scan to Computer in the accompanying app: just click on the printer shortcut that was created during installation, go to Manage Scan to Computer, and then disable the feature and uncheck the Automatically start Scan to Computer when I log on to Windows box (in the picture below, I've already disabled this feature). 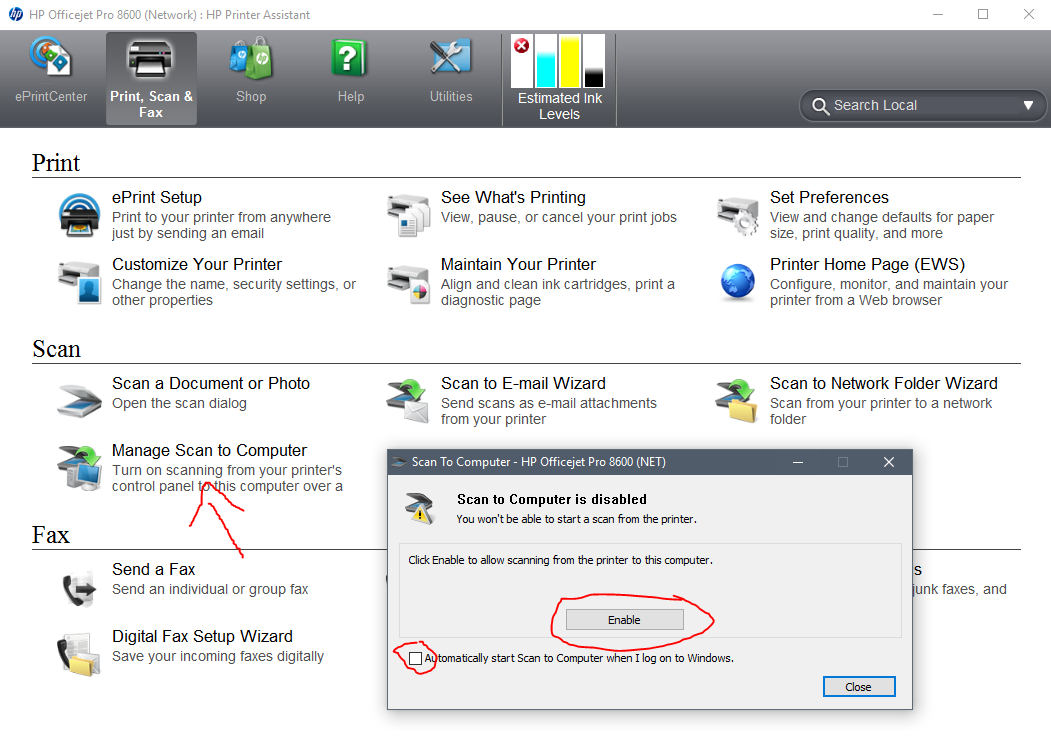 If you cannot find the shortcut: the app's default path should be "C:\Program Files\HP\printer name\Bin\".

This feature does not disable scanning from your computer - this works totally fine. It's only purpose is to to send a scanned document directly to the computer where this service is running when you scan at the printer - which is useless for me, personally.

I found the answer to this issue in the HP forums: https://h30434.www3.hp.com/t5/Scanning-Faxing-and-Copying/Scan-to-computer-is-no-longer-activated-again/td-p/3465249

I've had the very same problem after upgrading to Windows 10, although with A8500.

What did was the following:

Two more notes: * As an alternative solution, uninstall the AoI app. * This issue has nothing to do with the printers standby mode. The network interface of the printer always stays online to turn it on for printing.

My solution for this problem was to turn off my printer and turn it back on again. I had two computers that both said that the scan to computer was no longer activated. After I did that, the two different pages I tried to print were immediately printed from the printer. I think the address changed somehow on the printer and it needed to be rebooted back up for the computers to detect it properly. That is what worked for me.

Running Windows 10 Anniversary Edition, I started receiving this message after installing the HP ENVY 5640 software for one of our network printers.

I found the program "ScanToPCActivationApp" in the "C:\program files\HP\HP ENVY series\bin" directory.

I renamed it by adding "do not run" at the end of the file name. I then opened task manager, found the running app in the "Background Processes" section. A right click on the name opens a menu with the "End Task" option. Clicking on that stopped the process.

With the name changed, the process cannot be started and the problem is eliminated.

If I ever find that it is needed, it will be very easy to rename and restart. Another option is to create an "Archive" directory (folder) in that location and just move the file there.

Issue: With Windows 10 and HP Printer – “Scan to computer is no longer activated” error message?:

If you're using the touchscreen and don't have a mouse, go to task mgr, start up, hilight scantocomputer activation app and down on the far lower right, click Disable.

Not the answer you're looking for? Browse other questions tagged windows-10 windows-8.1 all-in-one or ask your own question.