"Your upgrade to Windows 10 is ready" How to cancel it? [duplicate]

I agreed to download Windows 10 and now it is downloaded and ready. I want to be able to control when it installs, possibly weeks from now. I'm currently on Windows 7.

I have been prompted with an option to choose which one of the next 3 days I would like the installation to happen on. There was no option to postpone it for longer, so I picked the third day.

However it seems like it will install the next time I restart, and I don't want that to happen. (see screenshot)

How can I cancel the upgrade?

If you go to the Optional updates under Windows 10, you can right-click on that specific update to Windows 10 and select "Hide Update".

That should make it so you don't see it for now, and then you can just un-hide it later.

I just had a client who unwittingly allowed W10 to "upgrade" her W7 system. She asked me to roll W10 back to W7 because W10 was so fundamentally broken and slow it was unusable. Here's my story of that rollback.

First, the W10 All Settings menu was broken right from the get go after the W10 "upgrade", so until I fixed that, it was impossible to access Update and Security to perform the rollback.

Looking at Event Viewer, every time I tried to open All Settings, SynTPEnh.exe, one of the Synaptics touchpad driver helper programs, crashed.

Figuring that was causing the problem, I removed the Synaptics touchpad item from add/remove. For good measure, while I was at it, I removed Norton, figuring that might be problematic, as well as a few other applications like icloud, quicktime, and itunes, figuring they would be restored during the rollback anyway. Turns out that was a HUGE mistake though the rollback would have been impossible without removing at least the Synaptics software.

At any rate, after rebooting after removing all of this stuff, All Settings started functioning for the first time, and I could perform the rollback with Update and Security.

And then the nightmare began.

First, rolling back did not undo the original W10 reservation, so no matter what I did, I could not keep W10 from redownloading and reattempting to reinstall. Searching the web, I found no solution, but did find MANY people nearly in tears with the same problem. Looking at how all this works, it looks to me like probably everyone who rolled back from W10 is going to find that their reservation does not get cancelled and that W10 is going to attempt to reinstall forever.

But I finally came up with a solution that I think should work to solve this problem for everyone.

(note that the space after "=" is critical)

When that's done, cut and paste into the open cmd window:

Note, at this time, if you wish to go ahead and remove the recent plethora of W10 spyware that Microsoft has installed on your W7/W8 systems, you can repeat the above command as follows:

(Note that not all of these will be on all systems.)

Cut & paste into the cmd window:

(note that the space after "=" is critical)

When that's done, cut and paste into the open cmd window:

However, for me, the REAL nightmare began!

As it turns out, when you roll back from W10, the old W7/W8 registry is restored but NOT any modified and/or deleted Program files. Thus, there's a complete mismatch between the restored W7/W8 registry and any programs altered or deleted when in W10.

In my case, after the rollback to W7, icloud, Norton 360, Quicktime, iturns, Citrix and others had registry entries as if installed, but all of the installation files were missing.

Naturally, none of these would reinstall because of the (corrupted) apparent pre-existing installation, and of course they couldn't be uninstalled since the uninstaller files were missing.

So I used several tools such as zuninstaller and Windows Cleanup Utility to remove the Add/Remove objects, and manually removed other entries from HKLM/SOFTWARE. ccleaner might have been very helpful here, but I don't really trust it.

But worse, thousands of the "restored" registry entries had been corrupted in HKLM\SOFTWARE\Microsoft\Windows\CurrentVersion\Installer\UserData\S-1-5-18\Components by having no ownership! Thus they could not be overwritten when reinstalling the programs.

I spent hours using powerful features in Registrar Registry Manager (RRM) Home Edition to find these keys and remove them in bulk. RRM was particularly vital because it could remove the no-owner keys, whereas regedit could not. Basically, once I found a bad key in Components, I did a search for all instances of that key in Components and then did a bulk delete with RRM.

Eventually, I was able to reinstall the programs I had uninstalled in W10.

Bottom line, Windows 10 itself is an absolute and total travesty, and rolling it back is likely to be a complete nightmare. Windows 10 is BY FAR the worst OS ever made by Microsoft, much worse than even W8.x, because W8.x can be made to behave pretty decently with Classic Shell and a few other tweaks, and does not have half the programs moved into the dumbed-down app mode and half the controls split beteen Control Panel and half in the dumbed-down app mode All Settings.

To hide the app's icon and notifications you will have to customize the notification area icons. Click or tap on the small arrow from the left side of the system tray. This should open a small popup with all the hidden icons. On its bottom, there is a link called Customize. Click or tap it. 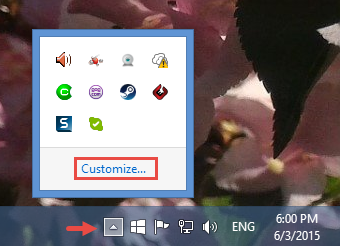 This action will open the Notification Area Icons window. Inside, look for an icon called GWX (Get Windows 10). In the Behaviors column, select "Hide icon and notifications". 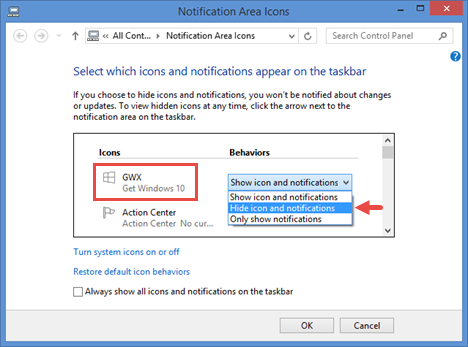 Click or tap OK and the "Get Windows 10" icon and notifications should now be hidden.

I used System Restore to go back to a point a week earlier. I don't know if this would allow me to keep my free copy reserved indefinitely, but it did allow me a simple way to delay the upgrade until I was ready, which was about 12 days later.

12
I Cancelled Microsoft 10 Reservation and uninstalled KB3035583 but Window 10 is still trying to install
5
Windows 10 is about to install - Any way to stop it?
2
Is there a way to cancel the Windows 10 upgrade in the middle of the upgrade process?
2
Postpone install of Windows 10 for 1 month?
0
WIndows Update is blocked by already cancelled upgrade to Windows 10