I checked the Dell website and they basically offer no resolution (a dedicated driver for Windows 10 is not forthcoming). I followed the steps they advised to check (Control Panel - Display Resolution - and then I find there is no option to set the monitor to its max resolution). I downloaded the driver from the Dell website for Windows 7 / 8 and installed it under Windows 10. Then tried to run this program. It recognises the display, but I cannot select any of the options presented. So I am stuck. Gone back to Windows 7.

Anyone has any suggestions?

The resolutions available tend to be dictated by your graphics driver not the drivers for your display if they have any particular special functions.

First you need to identify your Graphics Card (If any, you could be using integrated graphics) by visiting Device Manager (Right-Click the start button, Left-Click Device Manager) and then expanding Display Adapters.

If you want a specific link to the driver you need, reply in a comment with the Display Adapter listed in Device Manager.

I tried with the same screen and the problem is that the Dell Display Manager program (DDM) has not been ported to Windows 10. No mention by Microsoft in its pre update checks. Windows 10 is not listed as compatible for DDM/U2713H monitor on Dell site.

I could alter the display to 2560x1440 manually using a generic driver, but the the Dell Display Manager does much more, notable dividing the screen into predefined windows and layouts and auto/manually switching between RGB and sRGB depending on the program being used.

I was not prepared to give up all that functionality - so back to Windows 8.1 - fortunately, the roll back works well.

I contacted the writers of Dell Display Manager (support@entechtaiwan.com), who promptly advised me that DDM had been converted to Windows 10 quite some time ago and gave me this link (//www.delldisplaymanager.com/ddmsetup.exe) for it.

The Dell web site and Dell support personnel who both currently state that there is no DDM for Windows 10 for the U2713H, as at this date, are simply wrong.

After last months after retreat from Windows 10, this second upgrade to Windows 10 has everything working just fine. DDM is great and has already auto-updated and, unlike a month ago, the Dell U2713H screen is recognised as such by Windows 10.

Only Windows 10 downside encountered so far, is the size of the tray icons - which quite a number of people have commented on elsewhere - only resize option is to make them even smaller or increase absolutely everything or introduce a 3rd party start menu with an option to increase them about 20%. Hopefully that will change.

As an aside, the retreat from Windows 10 also stopped Macrium Reflect from running - unless the PC had very recently been restarted. Something was blocking it after, say 10 minutes. That downgrade SNAFU has disappeared with the permanent upgrade to Windows 10.

I had the same problem with my even older Geforce GT320M. Eventually I forced a custom resolution and this worked perfectly. Just be careful to ensure you do know the actual maximum native resolution. 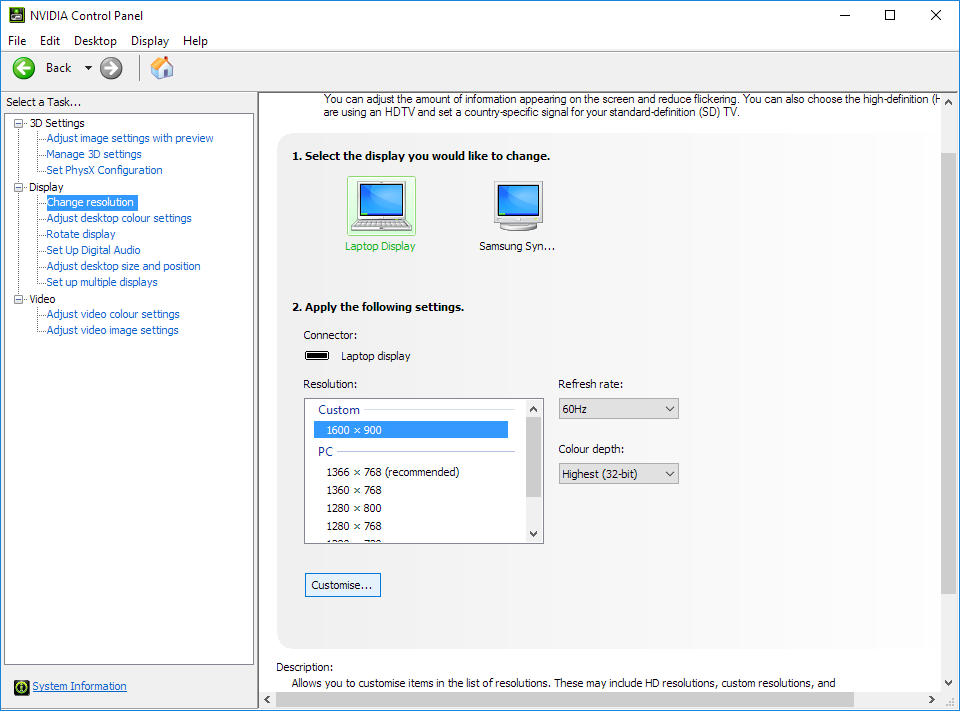 I was also having an issue. Thought it was Windows 10 but it was actually an issue with the cable I was using. Apparently the U2713HM won't work with an HDMI or single channel DVI cable. Only dual channel DVI or DisplayPort. I'm using an Alienware 13 with a Alienware Graphics accelerator with a Titan X attached so it was obviously not older hardware. Really shocking that the Dell display wouldn't accept HDMI as the newer standards, e.g. 1.4, should easily drive 2560X1440. Ordered a Displayport cable today. If I don't post back it worked.

Not the answer you're looking for? Browse other questions tagged display resolution or ask your own question.