Is there a way to remotely shut down a Windows machine on my home network that doesn't support RDP?

I have an older Dell Dimension desktop, originally running Windows XP, that I had recently upgraded to Windows 8.1. I plan on using it as a media server running Plex, and I can easily move files on to it over my home network and update the library through the Plex web admin. I would also like to be able to shut down the machine when I’m not using it.

I don’t want to plug a monitor and a keyboard into it, so I’m not sure how I can do this, since remote desktop is apparently only available in Windows 8.1 Pro for some reason. The only thing I can think of is to set up a web server that runs some highly-trusted code that can invoke the shutdown command on the host, but I imagine there is a simpler way.

VNC (TightVNC or many other flavors) is a freeware graphical remote control solution like Remote Desktop you wanted to use. It supports Windows 8.x. VNC though a SSH tunnel is recommended for usage across the Internet.

Alternatively if you enjoy the command line, try running an SSH server on your media server. You can then run an ssh client (like PuTTY) which would allow the automation of file transfers and access to the command line with high security. Inside of an ssh session or even directly from another Windows machine, you can use the shutdown command-line. This allows you to shut down or restart a local or remote computer.

For a low-tech solution, try holding the power button down quickly for a second or less (not the 5 seconds for a hard power off). Windows should shutdown gracefully or go into standby, depending on configuration.

As Peterh mentioned, you can also use telnet a command-line interface built-in to windows. See control panel, add-remove programs. While telnet is insecure for a home network it is a possibility. SSH is the recommended secure encrypted alternative that only takes a little longer to setup.

Find an old computer with a CD-ROM drive. Install linux. Name it HOMECOMPUTERSHUTDOWNROBOT. Find a plastic stick, about 2 inches long. Superglue it to the CD-ROM door so that it sticks straight out from the computer. Position the old computer so that the stick points at the power button for the computer you want to shut down. Use old books as necessary to prop the computer up to the needed height to do so.

When you want to turn off the computer, SSH into HOMECOMPUTERSHUTDOWNROBOT. In the terminal, use the eject command to eject the CD drive. The plastic stick will push the power button of the computer not supporting RDP and turn it off.

Another option for remote control, in addition to RDP and VNC, is services like LogMeIn, Team Viewer, WebEx or other similar alternatives to screensharing.

These options, like VNC, generally involve installing a client. You can then use their service to log into a computer remotely.

Find "telnet server" in the tree, and enable it. For now, you can get a remote command line with any telnet client (I would suggest either the telnet client in windows, can be enabled there, too), or putty (can work as a telnet client as well).

Logging there remotely you can halt / restart your machine with the common shutdown ... commands.

But beware: telnet is among the most cracked protocols of the internet, because it send everything (incl. passowords) unencrypted. Thus I highly suggest to combine this solution with an encrypting VPN.

Native windows solution (even works on ɴᴛ4). Very Simple. No need to install anything.

ꭥ 2. Then and for all the time you will need it, simply runshutdown /i. (Sorry but I can’t change the language) 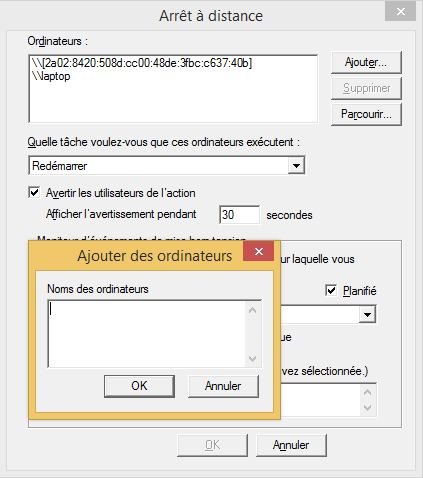 You can use this tool (an early version, but fully functional):

It will allow you to remotely shutdown the PlexMediaServer computer, by playing a a custom title from your library.

Not the answer you're looking for? Browse other questions tagged windows-8.1 remote-access or ask your own question.

3
Using multiple computers effectively
1
How to configure Remote desktop on window server 2008 R2?
4
Remotely Install Windows Updates and Software on Home network
2
ASRock UEFI setup utility has no option to disable secure boot
2
Share Clipboard Between Ubuntu and Windows Remote Desktop
2
Windows 8.1 freezes on EVERY restart OR shut down
2
VirtualBox: How to shut down Virtual Machine