Before evaluating Symantec/Norton Ghost to image partitions, I have a couple of questions about using this tool:

Just for the record, I will answer your questions based on Ghost (the Enterprise Edition), 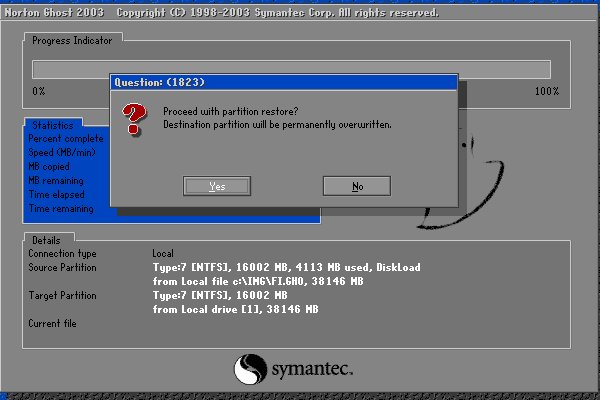 Not their consumer product with the same name which has derived from "PowerQuest Drive Image" but has got in common with the 'real deal'.

Yes, Symantec Ghost added support for the ext2 filesystem in 1999 and for ext3 subsequently.

Does it mean that images can only be created from within a running Windows?

For Windows partitions: Does it support both regular and Server versions? Acronis doesn't image Server partitions in the regular version.

Symantec Ghost will clone any Windows drive/partition (even when encrypted with BitLocker, but Ghost will switch to 'sector mode' and the images will be accordingly large in size).

When restoring an image, does Norton give the option of including/excluding the MBR?

The command line switch -PMBR specifies that the master boot record of the destination disk be preserved when performing a Disk-to-Disk or Image-to-Disk operation.

For more information about Ghost, I recommend the Radified Guide to Norton Ghost:

This guide presents what many consider the ultimate back-up strategy. It is based on features found in Norton Ghost, a hard drive imaging/cloning software program developed by Symantec.

Although designed around Norton Ghost (considered the most reliable application of its kind), the strategies presented here (such as performing a test-restore, to ensure your back-up image will work when you really need it) can be applied to any disk cloning program.

On a personal note: I have cloned thousands of drives with Ghost, it never failed me. Ghost is still the reference and 'industry standard'. the only program I consider anywhere near Ghost would be Drive Snapshot.

From the system requirements

So, unless Linux is covered under GPT, the answer would be no.

Not directly, the images you burn will simply be the data needed for a recovery. Ghost should come with a utility that allows you to access these disks.

I really don't know - Yes and No, I am guessing the problem with Acronis is simply an artificial limitation because they sell a server version. There should be no difference if you are performing a block level backup/image. I am guessing that Ghost will be the same - however, Acronis and Ghost both come wit a cut down bootable version for backing up / restoring... I am guessing that using this will bypass the restrictions.

I have always used to think of Ghost to be "the standard" but in recent versions, they go one step forward with an amazing feature and then go two steps back with a restriction or something that just makes you wonder why they do it.

All my answers have been based on using previous versions of Ghost (with the exception of the specification of the first). If they have made it even worse, I would be surprised as these are key features.

I've never really heard anything good about Norton Ghost - if all you want is a bit by bit copy of a drive, you might be better just using dd as so:

You can pipe it over ssh as well if needed, making this a pretty versatile tool.

I am using Ghost right now, version 16 booted from DVD to clone a Linux Mint drive. It sees it as :// ext3 for the swap partition, and :// unknown for the Main linux partition. It appears however it intends to copy contents of the entire hard drive, to the image, no matter that you have as in my case 250gb drive it is going to backup the entire space of the drive. Where normally it could compress it down to just the used part of the drive.

The most (and boy do I mean most) valuable features in Norton ghost is the ignore bad sectors option. With this option you can actually backup a damaged hard drive, to some degree at least. If the drive is badly damaged it might not be able to read past the defective areas. However in my experience it usually will. And of course like the older versions of ghost it can perform a sector by sector cloning or imaging of a drive.

The program I can count on for doing images of Linux OS is redo. Its totally free. It will also do many other OS images, including windows 8.1 etc. The only headache about it is the speed. Prepare to spend a lot of time doing the backup. Also unlike most backup programs, it makes a lot of small files in the location it backs up to. I also cannot yet figure out how to backup over to my LAN. Like Linux sine it boots up a flavor of it, you need to know how to get around in Linux from a terminal prompt. It has no option to skip bad sectors, and although you can force it past errors you would probably spend a lifetime getting past them on failing or nearly failing drive.

But I am holding personal testimony that it works with Ubuntu 64 bit compatible. I was able to install a bunch of stuff. On rhe completion of the full resotre everythung came back as normal and working.

About the worst part, is in dealing with the complicted menus and options. However there are only a few steps needed to get things running. Eventually there must be someone talented to figure how to do a live version. I.e. be able to fully image inside of the running Linux. Windows based versions of this such as Macrium Reflect which is my staple for Windows based OS, do what Microsoft refers to as VSS (Volume Shadow Service) which takes a snapsoft of the drive from within the working O/S to accurately clone off the drive while your still using it. The downside of that of course is that you simply cannot say install stuff or copy around data into the working drive, and expect it to be in the backup you just created. In other words it would be only as complete as the last VSS Shadow Copy scan, which is just before it starts the backup process.

Not the answer you're looking for? Browse other questions tagged images partitioning mbr iso-image norton-ghost or ask your own question.

1
Is there a way to obtain the raw image from a Norton Ghost file?
2
Are there any pitfalls to moving my Windows partition to a new hard drive using dd?
0
A bootable self-installable image of a fresh Windows installation with Norton Ghost?
1
Backup Multiple Networked Computer's Hard Drives, As Images, And All To A Single Server?
3
Boot ISO from HDD from UEFI?
0
Windows 8 and installing from image (Norton Ghost/Macrium Reflect/etc)
0
"Destination drive will be ovewritten" when creating an image from a partition
3
Boot Windows 10 on a machine without UEFI after images were created from MBR and restored on GPT partition table in Linux