How to get UAC to co-operate with synergy2

How do I get UAC to behave so that I can control the dimmed desktop and programs running under UAC grants with synergy client? (The kb and mouse are connected to a Linux machine, windows is running synergy client)

Or is turning UAC off the only option?

If you use a 1.4 or newer beta of Synergy, you can configure it to run as a service. As a service, Synergy runs as the local SYSTEM account, which can interact with the Secure Desktop space. I have the Synergy 1.5 nightly builds running on my Windows Server 2008 R2 laptop client and OS X 10.6 laptop server, and I am capable of working with UAC prompts with ease.

The reason this happens is because of what is referred to as the "secure desktop". The secure desktop has actually been around ever since NT. Certain parts of the OS, such as the login screen, the Ctrl+Alt+Del screen, and the locked workstation screen are actually completely different desktop sessions from what you normally interact with. Programs cannot interact directly with the secure desktop — this is to prevent keyboard loggers, etc, from messing with secure areas.

In Windows Vista and later, UAC is also a secure desktop area. While it looks like just a dimmed desktop, what you are seeing is actually a different desktop space, with a darkened screenshot of whatever was on your screen. No other program can interact with the UAC secure desktop, so that a virus could not, for example, say yes to its own prompt. This applies to Synergy just as it applies to any other program — it simply is not allowed to interact with the UAC dimmed desktop.

If you want the full security benefits of UAC, you simply can't use synergy. But, if you need synergy, the best compromise would be to set UAC to still prompt, but not on the secure desktop. This will cause the UAC prompt to act as a normal window on the normal desktop, meaning synergy can access it. 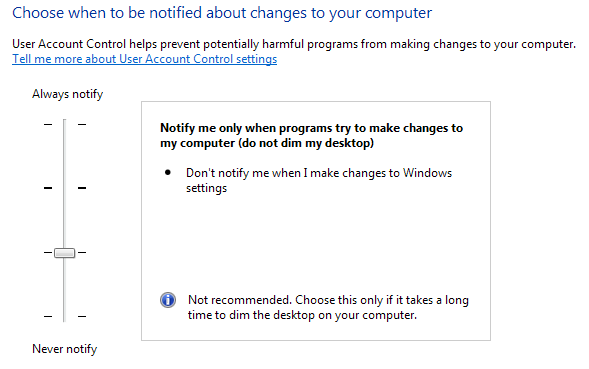 Hopefully that helps. If it still doesn't work, I have a few more things I could add, but try that first and see if it's what you need.

It works for me.

Not the answer you're looking for? Browse other questions tagged windows-7 uac synergy or ask your own question.

0
Synergy 1.4.2 - Windows 7 64-bit client with OS X server - no keyboard on Windows
5
Copy to clipboard from Firefox does not work with Synergy run in service mode on Windows 7 x64
3
Synergy connected fine but mouse doesn't move with two Windows 7 machines
0
Synergy between Windows XP/7 and Linux Mint 12RC fails
6
Synergy client drops and reconnects at UAC dialog
5
Make UAC dialog have focus by default
8
Synergy dual-screen client
0
How can I quickly unlock a Windows 7 machine remotely?
0
How to run UWP Apps with UAC turned off?
3
TCP connection only working one way on my local network (trying to connect with Synergy)