Do Wi-Fi router antennas rotate their direction in relation to the Wi-Fi device?

Do Wi-Fi router antennas rotate their direction based on the location of the device they are talking to? For example, based on MIMO, triangulation and other factors?

For example, if I keep my device still and in one location will the transfer rate go up?

Physically, router antennas don’t rotate. But logically, “beamforming” technology allows some MIMO routers to shape the transmission/reception power from the router to your device that is connected via 802.11n or 802.11ac.

But if you are concerned about whether the act of physically moving around affects data transmission/reception, it might theoretically affect speeds in some way. But on a practical level it might not be worth being concerned about. More details below.

Do Wi-Fi router antennas rotate their direction based on the location of the device they are talking to? For example, based on MIMO, triangulation and other factors?

Do Wi-Fi router antennas rotate? Well I know of none that physically rotate like the ears of a cat, dog or even Robby the Robot from Forbidden Planet…

That said, if the Wi-Fi router uses a multiple antenna array, it can use “beamforming” technology to effectively “shape” the way data is received and transmitted from the router’s antenna array. As Wikipedia explains; bold emphasis is mine:

Beamforming or spatial filtering is a signal processing technique used in sensor arrays for directional signal transmission or reception. This is achieved by combining elements in a phased array in such a way that signals at particular angles experience constructive interference while others experience destructive interference. Beamforming can be used at both the transmitting and receiving ends in order to achieve spatial selectivity. The improvement compared with omnidirectional reception/transmission is known as the receive/transmit gain (or loss).

This general concept is used in MIMO-based networking techniques as explained in O’Reilly’s “802.11ac: A Survival Guide”; again bold emphasis is mine:

An alternative method of transmission is to focus energy toward a receiver, a process called beamforming. Provided the AP has sufficient information to send the radio energy preferentially in one direction, it is possible to reach farther. The overall effect is illustrated in Figure 4-1 (pictured here). Beamforming focuses energy toward a client, such as to the laptop computer at the right side of the figure. The wedges illustrate the areas where the beamforming focus increases power, and therefore the signal-to-noise ratio and data rates. The mirrored preferential transmission to the left is a common effect of focusing energy in a system with limited antenna elements. However, focusing the energy toward the left and right sides of the figure means that the AP's range in other directions is smaller. 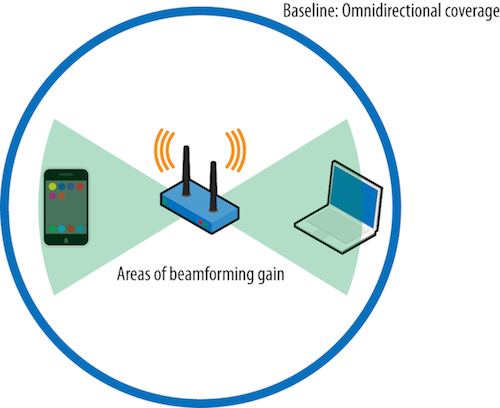 That said, beamforming is not a magical cure for Wi-Fi signal loss/strength and works best at medium ranges; once again bold emphasis is mine:

Beamforming increases the performance of wireless networks at medium ranges. At short ranges, the signal power is high enough that the SNR will support the maximum data rate. At long ranges, beamforming does not offer a substantial gain over an omnidirectional antenna, and data rates will be identical to non-beamformed transmissions. Beamforming works by improving what is called the rate over range—at a given distance from the AP, a client device will have better performance.

So when you ask the following question:

For example, if I keep my device still and in one location will the transfer rate go up?

Maybe it will. Maybe it won’t. You can experiment if you wish with moving around a room versus standing still. First check if your router actually has beamforming capabilities and such capabilities are enabled. But honestly, you might be trying to squeeze blood from a stone here for minimal gains.

Not the answer you're looking for? Browse other questions tagged wireless-networking 802.1x or ask your own question.

7
Direction of WiFi antenna
2
Will I get a better wireless signal by just replacing the antennas?
0
MIMO vs phased antenna in rapidly changing environment
1
External antennas of same router on different floors
0
How does a MU-MIMO device with more antennas behave on a network with less?
0
What is the speed and detail operation when several devices do a Speedtest in an MU-MIMO router simultaneously?