Firefox hide everything except content area of the browser

Is there a possibility to hide all borders and bars in firefox like address bar, navigation bar, window title and tabs, so the remaining area is just the content area of the browser?

I would like to make a movie of a web application I wrote, but have to film it in a bigger resolution than the app itself. I simply want to show the app on a background without all the browser stuff.

The best method would be via keyboard shortcut, so that I can reenable all the stuff again.

The easiest way is to install relevant add-ons in Firefox.

For any of the following setup, install the respective add-ons. Firefox may need to restart, but often unnecessary for Firefox Quantum. The shortcut key, if available, can be changed from Add-ons Manager > Extensions for respective add-on.

Firefox has a redesigned keyboard shortcuts section to manage all shortcuts in one place, which has been made available since Firefox 66.

Setup A uses the following add-ons:

For example, I have used separate keys F3 and F4 to toggle the navigation menu and tab bar (via Hide Navigation Bar and Hide Tabbar) respectively. To hide the bars, press the assigned keys one by one. This will give Firefox with visible title bar or window decoration only.

Limitation: Assigning the same key does not work well, because of some delay in between. The result is similar even if the separate keys were pressed at the same time. Either way, one of the bars will not hide and play hide-and-seek with the user.

Works with Firefox 56 and earlier (Deprecated), but no longer available from Firefox Add-ons. Tested altogether with Firefox 41.0 on Linux. No screenshot.

Setup B uses the following add-ons:

Go to a web page on HTTP, HTTPS, or localhost, then use the keyboard shortcut or click the corresponding icon on toolbar or "New window without toolbar" in context menu. The web page will additionally open in a new window with visible title bar and vertical scroll bar only.

Limitation: This add-on does not open any page on local filesystem (file:///) and built-in pages (about:*) at all. 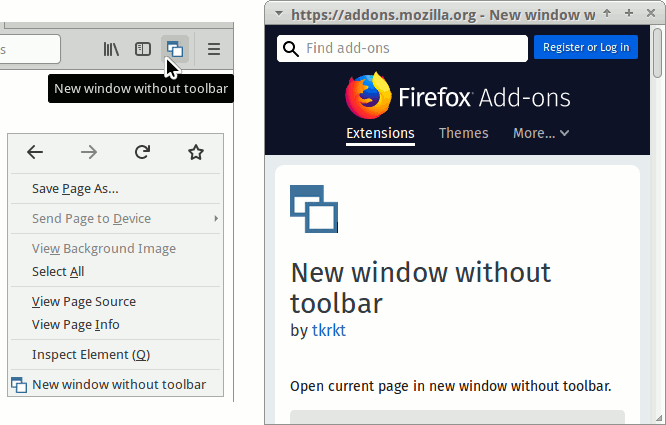 Keyboard shortcut: Not assigned (default in 0.0.8)

Limitation: The pop-up window will always stay on top of original window of Firefox, which can not be changed. 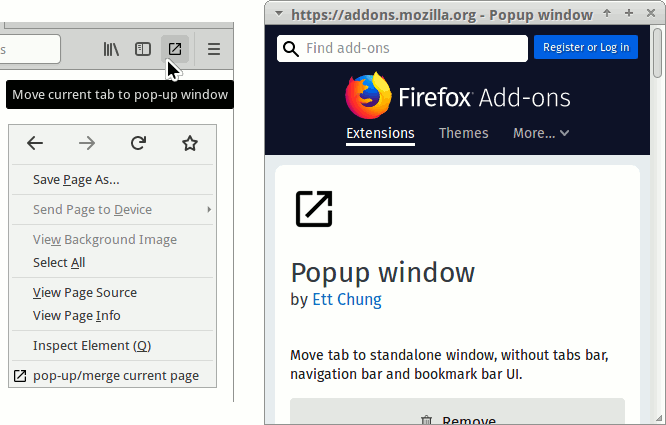 For Firefox without add-on

I have posted a separate answer at below (click or scroll down) that works for any release of Firefox, but not the easiest way and has no keyboard shortcuts.

The native way is to use the custom stylesheet in Firefox: userChrome.css

Firefox does not load userChrome.css by default in Firefox 69 and later. To make the custom stylesheet effective again, open about:config in Firefox and set the preference toolkit.legacyUserProfileCustomizations.stylesheets to true

Before this answer was updated, Mike G wrote a follow-up answer earlier.

The following code block is the content of userChrome.css that will hide the tab bar, navigation bar and scrollbars in Firefox. Ensure to use valid element names and IDs.

Limitation: No keyboard shortcuts. Tedious to enable or disable on-demand.

All profiles are stored in the profile folder, which can be located from Firefox using menu bar or toolbar, then navigate to Help > Troubleshooting Information.

How to setup and use

The following are generic steps regardless of system platform.

To start using, run an instance of Firefox with the new profile.

The following screenshot combo shows Firefox Legacy (left) and Firefox Quantum on Linux, each browsing in small window size when the custom stylesheet is used.

Works with all releases of Firefox, except Firefox 69 and later now disregard userChrome.css by default. Tested with Firefox 10, 20, 50 (Firefox Legacy) and 60, 63, 69 (Firefox Quantum) on Linux and all seemed to work as expected.

Answerer's note: This answer was written two years later, only after I had suggested using add-ons in the first answer. Since then, several more answers based on userChrome.css were written instead of improving this answer. Hence this answer is now a community wiki, so that anyone with minimum reputation can improve this post to keep up with latest changes in Firefox.

I know this is super late, but I made a bookmarklet for this, it requires no add ons, and no downloads :)

Save the following JavaScript code as a bookmarklet, and click on it on the page which you want to view in a new minimal window:

Note: This should work in all browsers

I know it's late, but maybe someone will like.

If you just want to hide the Firefox UI elements until they are needed then maybe my userChrome.css is for you. (working on FF 70.0.1)

To hide the tab-bar you'll need to use Firefox's customize (just right-click on the tab-bar) to pull the newtab (+) button off the tab-bar, and make sure you're using the system's Titlebar (so that the window min, max, and close buttons aren't on the tab-bar). Otherwise, those buttons will hinder the hiding.

Instructions on where to put the userChrome.css file and how to active it can be found in this excellent post: https://superuser.com/a/1269912/1107142

My userChrome.css, copy and paste at will:

I love Firefox and Vivaldi. One of the best features of Vivaldi (me being a user of mouse gestures) is that it has so many options (sidebars, bookmarks, addressbar, status bar etc) that can be adjusted and moved...

One shortcut says 'Hide UI'. Everything disappears... so when you don't need to see tabs/addy bar etc then I just do a mouse squiggle and am left with the page and the window.

Even better, the window colour takes hints from the webpage and works very well - blends in nicely.

The best option I know of is the full-screen mode, which is toggled using F11 in all modern browsers. That will hide your desktop background and other apps, though, which may not be what you want. It will simply fill the space around the web application's content with white (or whatever the background color / image in the web app's stylesheet is).

You can run your app window from the command line

and place on an extended desktop with a background of your choice.

Note that the answer from clearkimura above, which suggests using a stylesheet, needs a little tweak in later versions of Firefox. The solution worked for me once I did this. From the this web page:

To make startup faster for most users, Firefox 69 will no longer look for this file automatically. You need to tell it to look. Here's how:

That change should take effect on your next startup.

F11/Fullscreen is sometimes impractical.
If you just want to toggle the toolbars in Firefox versions previous to 57 it is possible with the addon "Dorando keyconfig":

1. specify a script in the Dorando "Key Editor":

2. map it to a keyboard shortcut via the Dorando addon-interface

2
How to hide address bar and tab bar in Firefox?
90
How to hide tab bar (tabstrip) in Firefox 57+ Quantum
4
Firefox Quantum (>=57) How to toggle all toolbars? (with a keyboard shortcut, like F11 but in a window, not fullscreen)
3
Making Firefox fullscreen-like without actually maximizing the window
1
Use multiple Firefox `WM_CLASS`es in same profile

0
Firefox randomly hides everything on the page
4
Firefox: How do you get your Menu back after you hide everything?
1
How to hide the convergence icon in Firefox?
34
Is there a way to indicate which Firefox tab is making sounds?
2
Firefox - Hide Ellipsis Menu
2
Firefox: Search history for content
35
Force Firefox Title Bar to use Windows operating system theme colors
0
Windows Fullscreen API, browser behaviour