How to add a shortcut in OneNote 2013

In Word 2013, I can use Alt+= to open a new equation-editing textbox.  As I have the Swiss keyboard layout, I actually press Alt+Shift+0 (zero) to achieve that.  This is a bit more complicated to press, but at least it works.

When I hover over the "Insert->Formula" button in OneNote, it tells me that the shortcut is Alt+Entf:

"Entf" is short for "Entfernen" which is German for "remove" or "delete".  Unfortunately, Alt+Delete does nothing at all in OneNote (and Alt+Shift+0 doesn't do anything either).

So I Googled. For Word, there are many tutorials how to change keyboard shortcuts: File -> Options -> Customize Ribbon -> some button

In OneNote, the settings are exactly the same – except for the fact that that button is not there...

I now need a way to add or edit the shortcuts of OneNote. I wouldn't mind if it is a hacky solution like a registry edit.

For example, in Word, if I press Alt (and either release it, or hold it for a second), I get this:

Note that the ribbon tabs are labeled with letters:

and the buttons on the Quick Access Toolbar (Save, Undo, Redo, …) are labeled with numerals.

If I press N, for INSERT, I get this

Note this detail from the right end: 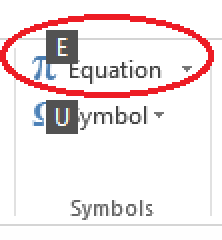 So, in U.S. English Microsoft Word, Alt, N, E is a hidden keyboard shortcut for Insert Equation.  You can type this any of the following ways:

and, once you have released the Alt key, you can use Shift, or not, as you prefer.  So you can

So experiment with Alt in your version of OneNote and see what you find.  (As noted, OneNote is different from Word, and these shortcuts may be language-dependent.)

I found a good suggestion on https://getonetastic.com/blog-shortcuts-for-macros for creating new keyboard shortcuts in OneNote:

The trick is to use the Quick Access Toolbar (QAT). The nice thing about QAT is that all the buttons in there get an automatic keyboard shortcut in the form of Alt + n where n is the button number. So the fifth button in the QAT has Alt + 5 as its shortcut.

So how do we get buttons to the QAT? You can normally right click on any button on the ribbon and click "Add to Quick Access Toolbar" and have it added to QAT.

For completeness, another way to add a shortcut in OneNote is to use AutoHotkey to send the keystrokes to access it via the default shortcut.

Have you tried CTRL + K to add shortcuts? (I'm assuming by shortcut you mean links). Here's a list of commands that might help, not sure however how it translates to your keyboard style:

Not the answer you're looking for? Browse other questions tagged keyboard-shortcuts microsoft-office microsoft-onenote or ask your own question.