I believe that these bits must be contiguous, because the whole point of subnetting is to derive host ID and ranges of available device IDs. But it does have me wondering, might you ever have a subnet mask of, say, 255.17.255.0, or:

The section 3.1 in the RFC shows the allowed masks in the classless inter-domain routing. The bits have to be contiguous for the routing to work properly.

Also when thinking logically it would not really make sense to have strange random network masks.

RFC 1219 states that the earlier RFC 950 permits non-contiguous bits. In fact, RFC 950 page 15 (section 3) clearly has an example which “illustrating non-contiguous subnet bits". However, there is no way to convert such subnets into CIDR notation. CIDR-style notation is what IPv6 has used (at least since RFC 1884 page 7, first sentence of section 2.4), so non-contiguous bits were never widely supported for IPv6 networks. RFC 1219’s method specifies that “subnet bits (mask = 1) are assigned from the most significant bit working towards the least". (The RFC 4632 section 3.1, mentioned by Sami’s answer, points to an official standard discussing CIDR notation.)

RFC 1878 page 2 shows the standard “subnet mask” notation for all the IPv4 subnets except for /0.

However, I'm going to elaborate a bit on Sami’s answer, looking into the “why” (with a concrete example, as the question did ask for)...

That would end up creating a group that contained all even-numbered IP addresses.

This was actually important to know, because Cisco’s training covered it, and so the examination process for Cisco’s professional certifications might ask about such a thing.

Wildcard masks with non-contiguous bits were not terribly useful, and could be more challenging to work with. The point of the subnet mask bit set to 1 is to say that bit helps to identify which subnet a device is in. There’s no compelling reason to have those bits spread throughout the address, instead of just nicely grouping them at the start of the address. The result was that supporting these types of masks were an added complexity without much substantial benefit.

I would not even try to make a network with non-contiguous “subnet bits” in the mask, because a lot of software would follow the newer trends/standards, and reject such a network design. Even if I was using older software, I would probably want my network to be able to be easily modified to be able to use newer software without needing to re-design the network. So, contiguous “subnet bits” are the only way to go.

If you're asked the question on a test, I would feel confident in saying that all the 1s need to be at the start of the address. That is what any sane tester would want the majority of students to be learning in this day and age.

so the proposal was about a simple bit operation which does not care about contiguous bits.

In 1985, CPU and memory were much more limited, so any more complex operations would simply not fit into the time.

It becomes even more explicit in chapter 3:

However, those RFCs seem to be outdated. On Windows 7 SP1 for example, it is not possible to set such a subnet mask: 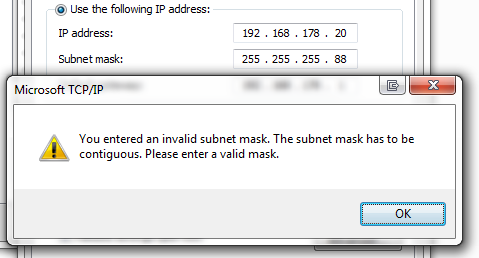 Even on Windows XP SP2, this was not possible any more:

The Windows 98 clone ReactOS however, allows setting the "strange" netmask: 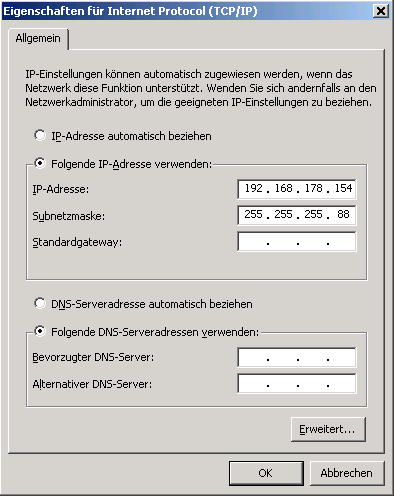 I agree with the answer of @Sami Kuhmonen:

The section 3.1 in the RFC shows the allowed masks in the classless inter-domain routing. The bits have to be contiguous for the routing to work properly. Also when thinking logically it would not really make sense to have strange random network masks.

However, even if it is not desired or allowed, it is still possible to define a subnet mask of non-consecutive 1's. The reason behind this:
The network ID and host ID are calculated from IP address and subnet mask using the binary operations AND and XOR. Everything else is irrelevant.

I have tested that years ago on Win 2000, it works. Both computers had a 255.160.0.0 mask. They were in a LAN without router, so I cannot tell about router's behaviour (normally you can set the router's mask only in it's web interface, which will reject it).
You also cannot enter such an 'invalid' subnet mask into the corresponding field of the network settings; the GUI refuses to take it. But you can cheat by changing it in the registry directly. Afterwards reboot or disable+enable the NIC for the changes to become active.
The purpose of that all: uhm, probably none.

Not the answer you're looking for? Browse other questions tagged networking ip subnet or ask your own question.

1
Calculating Subnets
1
using a gateway outside your subnet but on the same switch, with no router
2
Vmware: guest (Ubuntu) can't access internet through host (XP)
1
Subnetting 90.103.80.0/21 into 8 subnets with at least 250 hosts per subnet
2
How many subnets are needed?
1
Dividing a network into subnets
4
Non-contiguous Subnet Mask
1
Why does one have to enter subnet mask instead of simply number of 1-bits in the mask?
0
How exactly is a subnet mask used when determining where to send a packet to?