Consider a Windows 7 x64 installation with 2 printers installed. The system has 8GB installed RAM. One printer is a Brother laser MFC-8220 Printer via TCP/IP, and the other is a CutePDF printer.

Problem: the spoolsv.exe regularly eats obscene amount of memory and CPU when the machine is idle. Usually the device is powered off. Turning it on has no effect on the RAM or CPU usage.

The first consideration was that perhaps a print job has previously been sent to the Brother, but the queues are empty, and no jobs are waiting.

These screenshots do not show, but regularly the spoolsv service will consume all 8GB and climb to use 95-100% of the CPU. 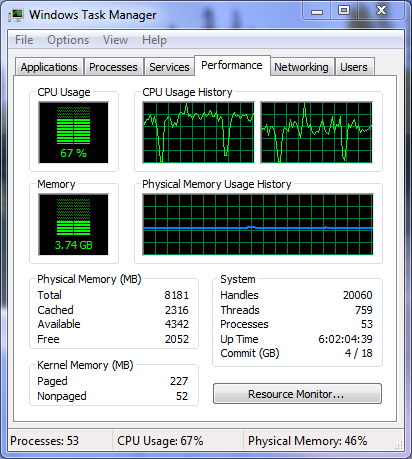 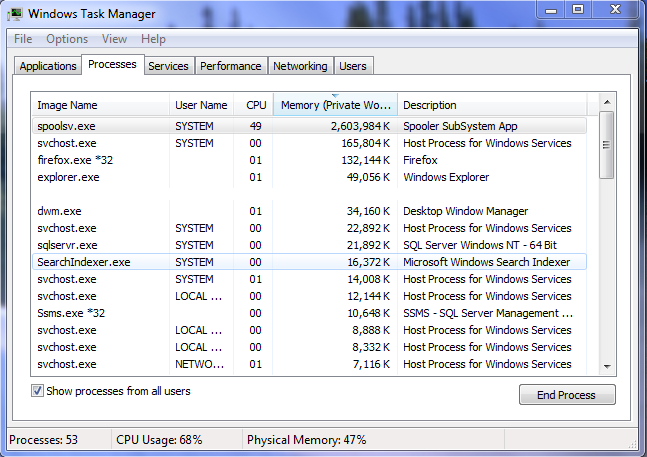 The two printers - a Brother and the CutePDF printer both have 0 documents in their respective queues.

Question: what measures can I take to ensure the spoolsv.exe doesn't consume inappropriate amounts of CPU and RAM? 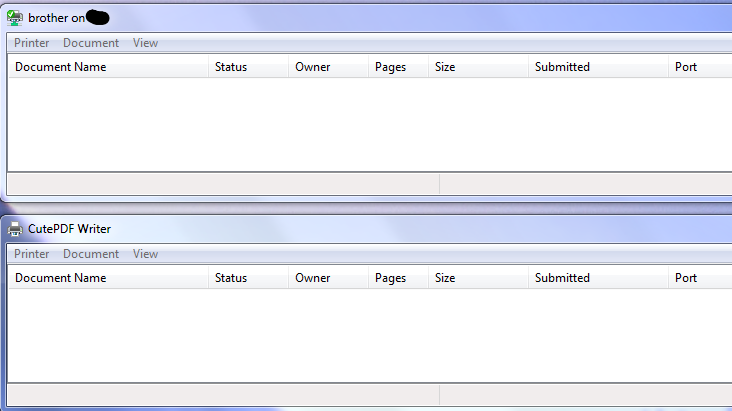 SPOOLSV loads print drivers into its own process - uninstall the Brother print and the driver package (from Print Management) and see if the issue persists. If it does not then the problem is the print driver.

A few people suggested using "Print Directly To Printer", if you consider that a "solution".

If that doesn't help, you may want to script the spool service to restart when it starts using > 100MB of RAM - again, that's if you consider it a "solution".

If you're hell-bent on solving this problem properly, XPERF the process when it's exhibiting high CPU and see where you're burning those CPU cycles. If it's inside a Brother DLL then send them an email.

It may be the common "corrupted print file" problem. Check under C:\WINDOWS\system32\spool\PRINTERS for any files that may be lingering. Delete them all and restart the print spooler service.

Try the Resource Monitor, built into Windows 7 (Vista?). That should help you check if it's a problem with disk or network accesses.

I have the same problem. It happens when using the brother MFC-8440 as a network printer. We use a USB printer, and its useable on the network. the drivers install locally, and it prints normally. but CPU usage is high, and RAM constantly grows.

This was an issue both in XP and in Windows 7

Not the answer you're looking for? Browse other questions tagged windows-7 cpu-usage print-spooler cutepdf or ask your own question.

12
Windows 7 Firewall services consuming all CPU
24
What is the relationship between CPU usage and RAM?
24
opendirectoryd consumes 40% of CPU
6
Google chrome consumes 100% CPU for nearly a minute