I've been running a VM with OSX for a while now while developing for iOS using an iPhone device. Everything was working fine until the update to El Capitan. Since the update, the iPhone is no longer being recognized by the VM-OSX (this includes iTunes, Xcode and AppCode).

The iOS device is definitely connected to the VM and not to the host computer, and I have clicked the "Trust this computer" in the popup which appears when plugging it into the usb for both the host and the VM.

Any idea what can be done about this other than going back to Yosemite?

Following the example of this question, the device does appear in the hardware list: 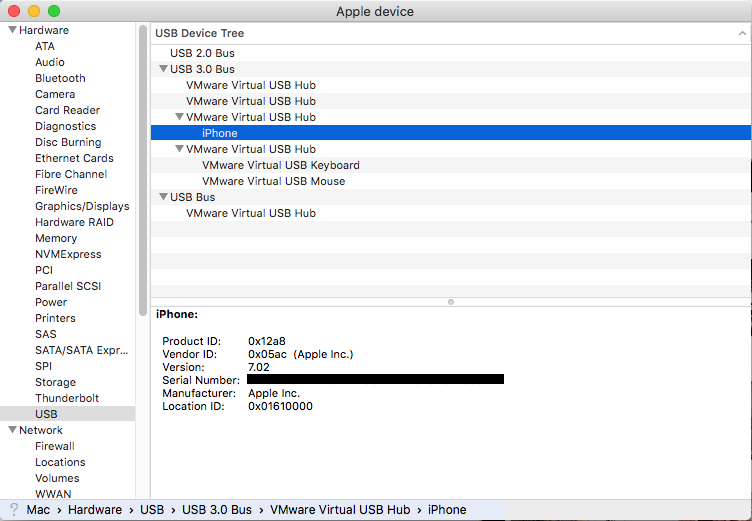 As discussed in this thread, a faulty AppleUSBEthernetHost.kext that was present on my system (v8.0.1) may have been the cause of the problem. I tried replacing it with an older version (7.0).

These are the steps I took:

This action did not fix my problem.

Inspired by this thread, where the new USB handling system introduced in El Capitan was discussed, I've attempted a very simple settings change in my VM configuration that managed to resolve the problem for me:

Since my device was connected through a USB2 port anyway, all it took was to tell the VM to treat the port as such.

I'm aware that this solution is not perfect, as it might hurt the transfer rates of USB3 communications, but what it lacks in performance it makes up in simplicity :)

Note: You will need to shutdown your VM, change the USB compatibility setting and restart for the change to take effect. Disconnect the iPhone/iPad from the host while doing this, just in case

7
when using a mac VM with VMWare, how do I use command key within the VM?