Manually Add Program to Open With in Windows 10

I have a standalone version of IrfanView (x64) and want it to appear in the Open With menu for all image files. I do not want it to be the default program however. For some reason no matter what I do, it doesn't want to enter this list. It doesn't even appear in the 'more apps' menu after clicking Open With. Here are the things I tried (in no particular order):

I think you should retry Default Programs Editor.

Don't click on "Context Menu" but rather on the option at the bottom - "Change'Open with' programs": 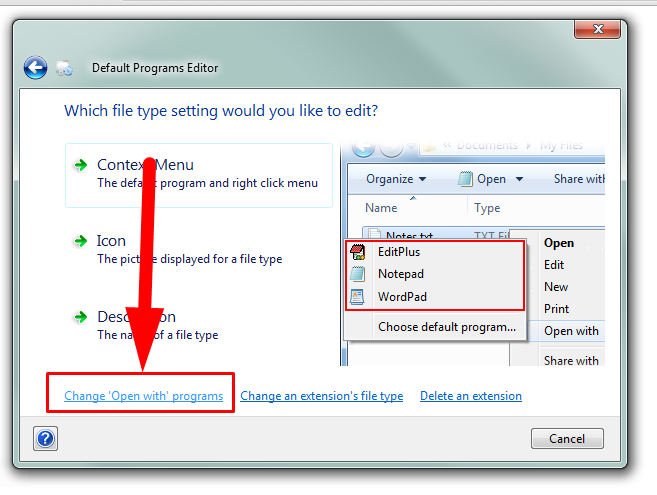 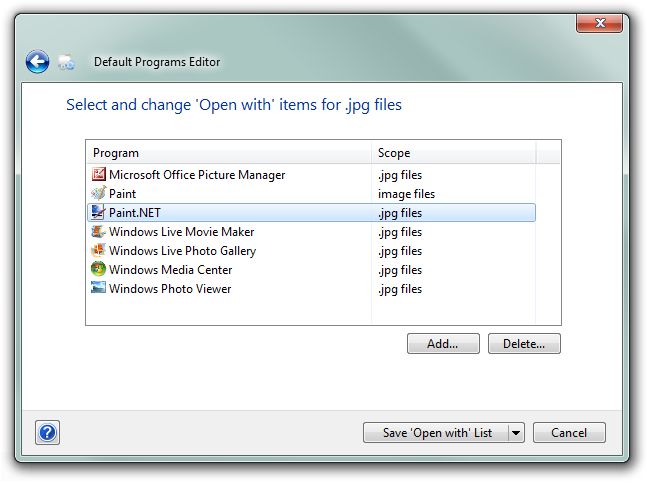 You may need to restart you computer for changes to appear.

Another excellent tool is OpenWithView, by Nir Sofer.

It is very much worth checking his other free tools.

I ran into a special case that required some alternate steps and wanted to share it in the likelihood that someone else runs into the same problem:

So I wanted to fix Visual Studio 2013 and 2015 not appearing in the initial Open With list for .sln files; only 2017 and 2010 (the later of which has never even been installed on this machine). Imagine my frustration when, according to Default Programs Editor, everything I want is already in the list.

And they in fact were already in .sln's OpenWithProgids, but it turns out MS invented a new AllowSilentDefaultTakeOver registry value for file classes in Windows 8 that maybe does a few things, but among them seems to be preventing a program from showing up in the initial Open With list; because as soon as I removed the AllowSilentDefaultTakeOver value from the VisualStudio.sln.12.0 and VisualStudio.sln.14.0 keys under HKEY_CLASSES_ROOT, Visual Studio 2013 and 2015 finally showed up.

And just to be sure, I added AllowSilentDefaultTakeOver to the useless Visual Studio 2010 class, and lo, it disappeared from the Open With list!

So, if it seems like you've tried everything to get a program to appear in a file type's Open With list and it's just not working, look for an AllowSilentDefaultTakeOver value in HKEY_CLASSES_ROOT\[program's file type ProgID]. (Though, realistically, you'll probably only see this on older versions of Microsoft programs when you also have a newer version installed.)

If you're familiar with Reg, try to add these two

1
Associate JPG with Irfanview in Windows 8
13
Open .ics files with Windows 10 Calendar app
13
Cannot set a Windows 10 Store App as default program to open a file
2
windows 10 open with context menu empty
31
Editing the "Open with" menu in Windows 10
0
Choose default photo viewer app to open from Windows Camera
0
Need to open SVG files in a program but they default to IE