What is the difference between running a .bat from cmd line vs. double click?

I have a .bat script with ftp commands (all in one) similar to this. See 5th down:FTP - Resolving Environment Variables - Creating FTP script on the fly at runtime and using variables within the FTP script

When I run the .bat from command line, everything works well. The files are transferred (in my case) from the server to my computer.

However, when I run this same .bat file by double clicking, it no longer interprets the ftp script correctly.

All other .bat files seem to work the same if they are double clicked vs. called from command line. Will that not work here? If so, why not?

EDIT:
It seems the problem is when it reaches the first ftp command that uses a variable.
For example it will open and connect fine, but then my next command is a get with a variable for the file name. It can't seem to read the variable name and just calls get. However, I do not see this issue when I call the bat from the cmd line....

This is very hard without knowing how the script is failing.

The main difference between running from a command prompt window and double click would be the working directory.

You cannot change this on normal batch files, but you can create a shortcut to the batch file and change the Start in: directory there. 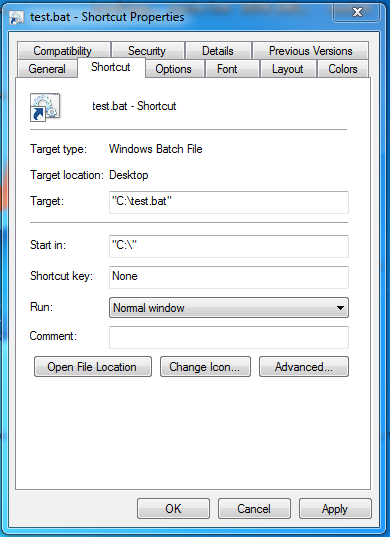 I would guess that your current directory is set wrong when double clicking on the .bat file and that is what is causing it not to find the FTP script.

Try adding echo %CD% to the batch file and see what it prints in each case.

ANSWER:
My variables were declared before the for loop that saves the ftp commands in a temp file, and then replaces the variables with the values. So at that point, there were no variables to replace the ones used in the ftp script.

When double clicking, it was opening for the first session, every time, and the variables were deleted in memory after it closed automatically. So in this case it opened and closed, each time I double clicked it.

Opening for the first session vs. calling it again in the same console without closing it out was the main difference here. Calling it the first time, the variables would be saved BEFORE after the ftp script was already created.

Please feel free to edit this if you can make it clearer...

Not the answer you're looking for? Browse other questions tagged windows batch ftp or ask your own question.

4
Automatically running a windows bat file after returning from idle
4
Running vim script exits batch file? (Windows .BAT/.CMD)
1
Running a Python script from the "Run" prompt
0
Windows cmd: escape commands to start cmd from batch file, executing commands that add to PATH
2
Why does CMD substring not work when BAT called from SENDTO?
0
Batch file not running due to weird symbols at the start of the line
1
WinSCP: Unknown command 'winscp.com'
0
Starting a batch file with spaces / quotation marks preventing the batch from running