I recently upgraded Office from 2010 to 2013. I have a large (700 pages) and complex document that contains text and pictures (inserted as In-Line With Text). The document has two problems:

1) Pictures are no longer visible in Word 2013. I noticed that if I change the view from Web Layout (which is the most suitable view for this particular document) to Print Layout, then the pictures become visible. The following workarounds did not help: - Changing the position/wrapping of the pictures (which are clickable elements, if all white) - using the "convert to latest document format"option (the document is right now in 2013 docx format)

2) In addition, Word reacts very slowly when I edit this document; all actions are very sluggish, with a delay of about 2 seconds, which is frustrating. The following are causes that I've ruled out, or workarounds that don't help for this problem:

Any suggestions what I can try to get rid of these 2 problems - which seem to be related - for my document?

I too had this problem with a large document - Word 2013 was sluggish and not displaying pictures in web layout. The document was about 8 MB and 900 pages.

After some investigation I concluded this is a deficiency in Word's rendering of web layout.

The clincher for me was discovering that the same picture inserted at successive locations rendered squashed up and then not at all. Here's a screenshot from the place in the document where things go wrong. 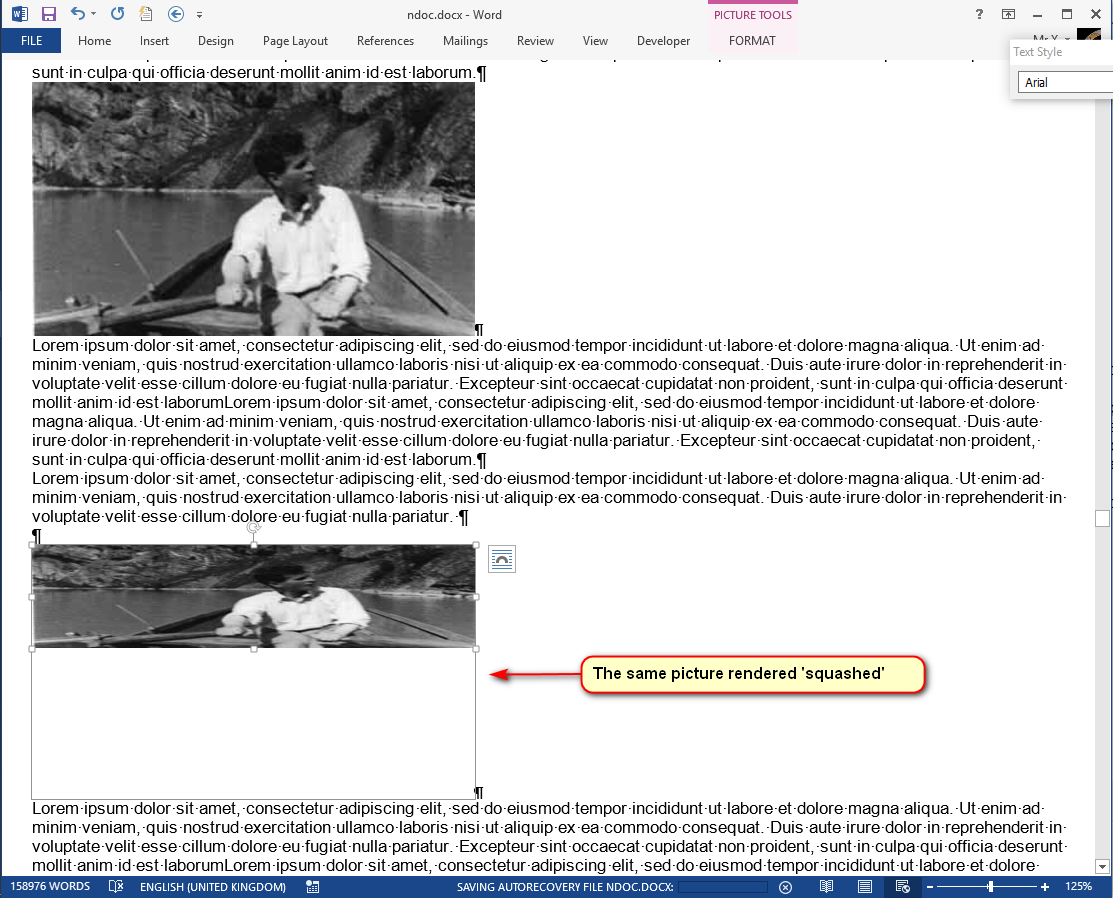 So there is a point in the document beyond which images do not render, as though a limit has been reached and an attempt is made to render the image by squashing it vertically. The limit varies with the pane size for displaying the document e.g. if the navigation pane is displayed the limit on image displaying is moved up the document.

This is a bug in Word's image rendering in Web Layout of the later file format.

In my case, since I wanted to use Word rather than switch to LibreOffice, and use docx rather than doc format, I split the document into several separate smaller documents; these display images OK although are a little inconvenient.

The long thread Word 2013: Extremely slow saving and pasting plain text in long documents, from January 2013, contains some workarounds that worked for some people.

Here is the list. I suggest to try them one-by-one and undo the ones that do not help:

The article 10 Microsoft Word 2013 headaches and how to cure them might also be useful.

This works because Libre Office Writer cleans the code of the .docx

0
Microsoft office gets slow for Large file editing
3
Really slow editing of a big document, but computer has resources unused

0
Saving .doc file to .docx file in word 2007 losing the bullet list
0
Document Map and Print View at the same time
1
Potential issues with working on the same document with Open Office and Word
2
Is there any implications in converting doc to docx?
2
Why does Microsoft Word open Word 6.0 Binary Documents and Templates in Protected View by default? Is there a reason I shouldn't turn that off?
0
Word 2013: pages are missing in docx file (was edited with Word 2003)
3
Really slow editing of a big document, but computer has resources unused
0
Delete print settings from Microsoft Word document