How damaged is my SSD disc

It is known that after exceeding amount of write procedures to a particular SSD sector this sector dies and is replaced with another one from reserved ones. Please, correct me if I'm wrong.

I suppose it might be unsafe to use SSD disc for very long time. But I would like to know how much damaged is my disc, how many damaged sectors it has? How to get such info? Is there any useful software to check it?

The idea that SSDs are fragile snowflakes that will melt under the white heat of data is a bit of a mistake.

Many tests have been done where drives have been torture tested - tech report did one with last generation drives and basically its PRETTY hard to kill a modern SSD by excessive writes.

Bit of a disclaimer. SMART needs careful interpretation and will tell you something can go wrong. Not that it will. SSDs may have different smart attributes based on brand. Look up the documentation for your drive. I primarily own samsungs at the moment, so my answer references the drives I have and the software for them.

People have put SSDs through workloads significantly worse than what they have been rated for and they have survived. Treat them like any other storage. Back them up, of course, but they arn't typically going to die that fast.

There's a few factors to SSD endurance - process size (the larger the better but not always), bits per cell (slc is better than mlc is better than tlc) and so on. However most modern drive have impressive endurance,

However, most drives have a certain amount of 'spare' cells (aka overprovisioning) that should help mitigate dead/worn out nand. Amusingly, the best drives (enterprise class SLC) and worst consumer level TLC drives both have a lot of this. In short, the drive handles this so you don't have to.

Interestingly SSDs use the same SMART standards as any other drive, and either your manufacturers tools or your favourite SMART information tool will tell you the raw values. However the attributes may differ. 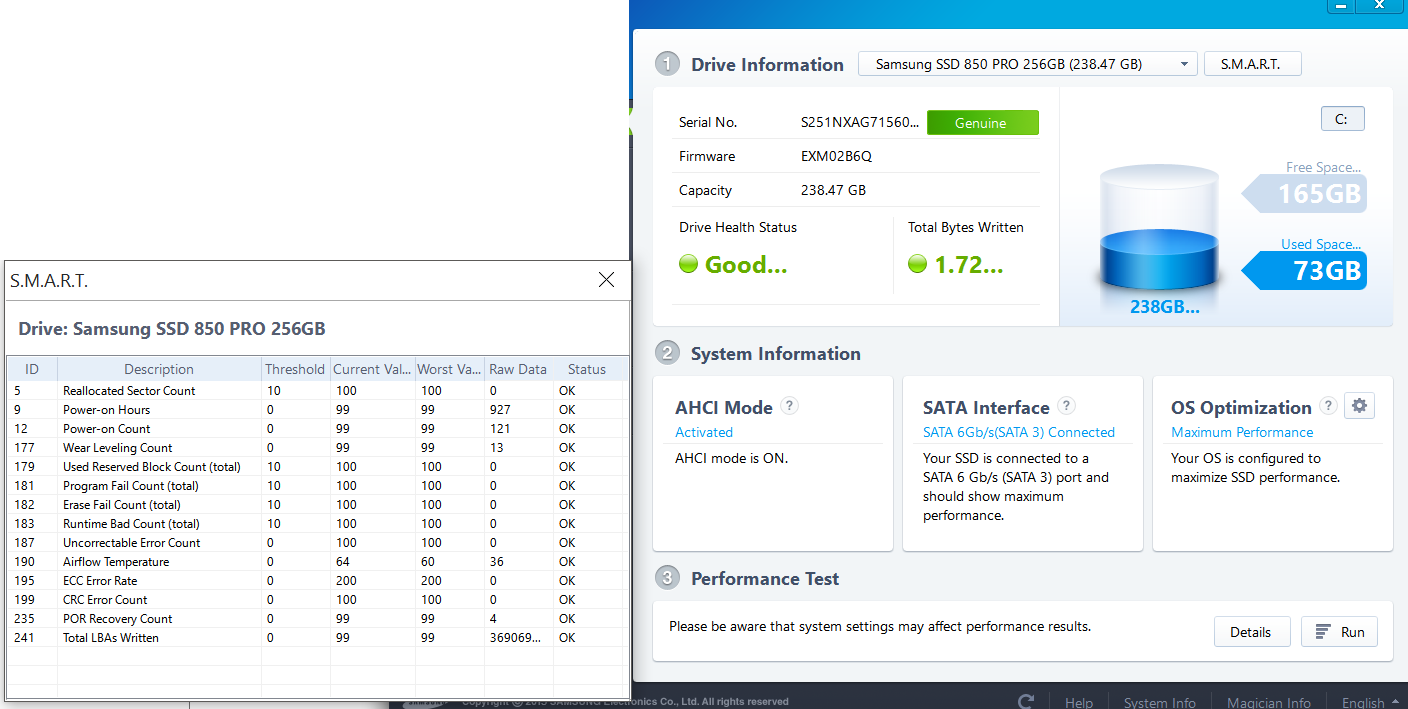 Annoyingly these standards are not too standard and interpretation is as much as art as a science. I just tend to rely on the little green health status label to tell me everything's fine. That said, samsung has a rough guide on interpreting the values and suggest except for total LBA's written, the raw values should be indicative of what's going on. Check your specific manufacturer to be sure,

Practically speaking, unless you're hitting the bathtub curve of premature death, or a wierd bug, your drive is at least going to live as long as the warranty.

But I would like to know how deadly is my disc, how many damaged sectors it has? How to get such info?

As an example, my Intel 530 SSD (after nearly two years of use) reports the value of the Media_Wearout_Indicator SMART attribute as 098 (it started out at 100, and is a percentage; this is documented by Intel in some specification somewhere...), with a "threshold" of 000. The "threshold" value is when the vendor feels the media has outlived its useful life and/or failure is imminent. The exact physical processes that map to these values differ between drives, which is why the normalized value is useful for telling the current state of the drive. Other SSDs are probably slightly different, but the principle is the same.

It is known that after exceeding write procedure to particular SSD sector count this sector dies and is replaced with another one from reserved ones. Please, correct me if I'm wrong.

Your understanding is wrong. SSDs use a combination of several techniques to spread the writes, and the most relevant here is probably wear leveling. This is done to prolong the life of each flash block proactively, rather than simply react to failing writes after the fact. Also, flash memory is rated to a certain number of writes per block (not sector; "sector" is an artefact of rotational storage), but that doesn't mean that the memory will instantly fail once that number of writes has been reached, just that the flash memory manufacturer doesn't guarantee that it will keep working after that point.

And like Journeyman Geek said, backups! We get questions all the time from people on how to recover data from a failed storage device which held the only copy of the data. Make regular backups (ideally, make the backups fully automated); you will save yourself a lot of grief. SSDs aren't particularly fragile, but they still fail from time to time just like any other device.

Not the answer you're looking for? Browse other questions tagged hard-drive ssd or ask your own question.

1
How to find out if an SSD is bad or about to die (health check)?
128
Should I defragment my SSD?
9
Should I use a SSD or HDD for "swap" on an old computer
6
What kind of wear does writing and deleting large volumes of data put on storage devices?
4
What exactly is the negative impact of placing page file on SSD?
-1
Can I perserve my SSD lifespan if I use utorrent Portable on a separate disk?

1
Intel SSD X25-M, Smart Attributes, Lifetime writes
23
Using “badblocks” on modern disks
0
Where do replacement hard drive sectors come from?
2
How to avoid dd or badblocks erasing hard drives' spare sectors?
0
How to re-use a corrupt drive
3
SSD write amplification and endurance
0
Why can't I limit my hardrive to only good sectors?
0
Does HDD firmware write back corrected sector when reading bad but correctable sector?