Will the pixel density difference be visible between 4K and 2K monitors at 27" size?

I am trying to get an idea of what visible difference there would be between 27" monitors with 4K vs. 2K resolutions. Would a person of normal vision, viewing at a typical viewing distance, notice any difference between native 4K content displayed on a 4K monitor and the same content in native 2K displayed on a 2K monitor of this size? I would be using it for video rendering.

The kind of answer I'm looking for is either a technical explanation based on the screen resolution vs. normal human vision capabilities, research on the effectiveness of 4K vs. 2K monitors, or an assessment by people with direct user experience with such monitors who can describe the visual characteristics of the differences and the degree to which they are noticeable.

IMO "sort of". Its definitely better and sharper, but native 4k content is pretty rare.

I'm looking at a 1080p and a 2180p display right now. I do do some sort of upsampling in my video player for 720p video and it looks fine. (Would screenshots be of help here? I dunno).

There's a lot of disagreement over whether 4K is worth it. Wirecutter doesn't explicitly suggest 4K displays 'cause they feel there's little benefit.

That said, I've worked in the vfx industry and no one worked in 4K. I can't remember what our 'standard' displays were but they're pretty crap. We used fairly standard Dells, typically older ones that were lying around. Good monitors would be 1080p or 1440p color calibrated. There's more concern over color calibration, and general real estate, and most work's done on 2K anyway. I'm not going to suggest exact models since I don't know whether my NDA at my last job covers that or not. Least as of this year, it doesn't feel like it's an essential tool for a professional visual effects or video rendering artist.

Depending on the sort of work you're doing, it's going to range from 'it doesn't matter' (you don't need 4k for modelling, or even texturing) to 'Just get a TV to see what it looks like' (if you want to see how 4k looks like, and most TVs have lower pixel density at 4K, since they are bigger) to "OH MY GOD IT IS AWESOME" (If you're a coder, or want a good general purpose high resolution display).

That said, most native 4K content is gloriously lush in many cases, but that might be cause they're made using really good cameras, and meant to showcase 4K. I've not managed to get my paws on a movie or TV show that's native 4k. I'm eagerly looking forward to netflix coming here for science.

The next question is "can I tell the difference?"

It depends on your distance from the screen. rtings has a great interactive site for working out these things. That said, they have a handy visual chart 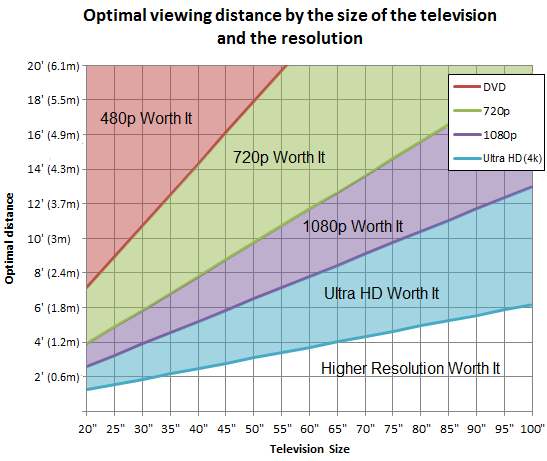 Puget systems actually does the math, and considers things like visual acuity if you like more science. TLDR/THDM (Too hard didn't math) - Yes . They also have a lovely spreadsheet on google docs if you don't want to do the math

Now, there's a few other factors to consider.

Its even better in terms of pixel density than the legendary T220p, which essentially was designed to have a resolution like print media

However that's not the only reason its better, and not the only thing to look at. My screen is IPS, which is a significantly better technology. Its colour calibrated at the factory.

If it's in your budget, and you're willing to spend the extra scratch for a machine that can do what you want in 4K, it's definitely worth it. That said, when you can get a reasonably good setup for a few thousand less, it depends. I don't think unless you are working at 4K, its really going to be something that would help rendering though. Were I designing a setup for a 3d artist, (and building around a fairly powerful workstation), I might pair this up with a good (or mediocre) 2k display and get the best of both worlds, since you can review work at both resolutions

We're also at the point where 4K isn't common enough to chop too many features on mainstream monitors, the useful features (SST, mainstream outputs) are common on current displays and with some decent comparison shopping, you could probably buy one with a great feature set for not too much money. Jeff Atwood has three, and the excellent p2714q that I have is a hair under 500USD.

That said. The real question is "should I buy one?"

My usual answer would be not yet. The content isn't there, video cards struggle with rendering 4K video (I have a 980ti, and it tends to redline with most games, and the FPS tends to be decent, not spectacular at 4K). In your case though, it may make sense, especially if you intend to work with 4K, or code a fair bit. The extra real-estate, and sharpness is awesome enough that I'm looking at a second 4K display when I can afford it.

Let me start with a caveat. The answer is very dependent on the nature of the content. Your eyes can detect miniscule high-contrast objects, like a bright speck of light on a black field or a black speck on a white field. Resolving differences between adjacent colors is different. If you are looking at laser printed output, for example, a 200 dpi black on white fax will look crude; you need 400 to 600 dpi for text characters to look smooth. On the other hand, a 200 dpi 24 bit photo will look pretty good. With a moving image, you're dealing with visual persistence, which has even different characteristics. So this kind of question is difficult to answer precisely.

That said, we can do some math. A 2K (assuming 1920 pixels), 27" screen will have a pixel density of about 82 ppi, and a 4K will be about 163 ppi. With normal eyesight, If you get within a few inches of the 2K screen, you will be able to easily see the individual pixels. You could probably notice them at a normal viewing distance with a still image, or if the pixels are high contrast.

With video, individual pixels aren't visible if they aren't high contrast (essentially persistent noise). However, if you were to view, side-by-side at normal viewing distance, a video at the full native image resolution that each screen is capable of displaying, you would probably see a sharper, more subtly-detailed image (more "photographic"), on the 4K screen.

Not the answer you're looking for? Browse other questions tagged resolution 4k-resolution or ask your own question.

1
Is it possible (and functional) to use a 4k 28" screen like 4 full hd screens?
1
Is there a monitor that can achieve the resolution of an android smartphone?
1
What monitor features are good for my eyes?

4
Buying dual monitors of different size and resolution
1
Relation between LCD best resolution and actual font size (pixel)
0
What is the real difference between 21.5" and 22" monitors?
139
What is the difference between 4K, UHD and QHD? Do we agree on one official resolution?
4
4k Monitor. Higher PPI than iMac 27". More Pixelated than iMac
3
What is better for eyes: higher pixel density vs larger screen size?
0
dual monitors wrong resolution since W10 update
1
Difference between 16:9 and 16:10 aspect ratio based on laptop's display size
2
Win10 display settings 'Duplicate mode' interfering with monitor OSD
0
What could be the reason for difference in clarity on two different displays with approximately same DPI?