SSH RSA key and passphrase with umlaute rejected. Why can't I use umlaute?

I've successfully created an RSA key with password, logged in and placed it into ~/.ssh/authorized_keys. PuTTY is configured to use this private key.

SSH Handshake works on first try and server asks for my RSA password. I insert it and he says that it's the wrong password.

My Password contains numbers, special characters and german Umlaute (ÄÖÜ) (I'm german which means that I have these keys on my keyboard)

Does anyone know what I can do about it?
I would love having numbers, currency characters and Umlaute in my Password because they're considered very safe.
My password isn't very long - Maybe SSH has a minimum char amount?
(It's short because I want to type it fast while making it hard for bruteforce attacks due to rare characters)

Do I need to configure SSH and/or Linux in a special way? My Ubuntu Server is completely in English but the server shouldn't be surprised by these characters because I set the keyboard layout to german on setup and it worked fine.

I hope that this is enough information.
Would be cool if you guys know a solution. 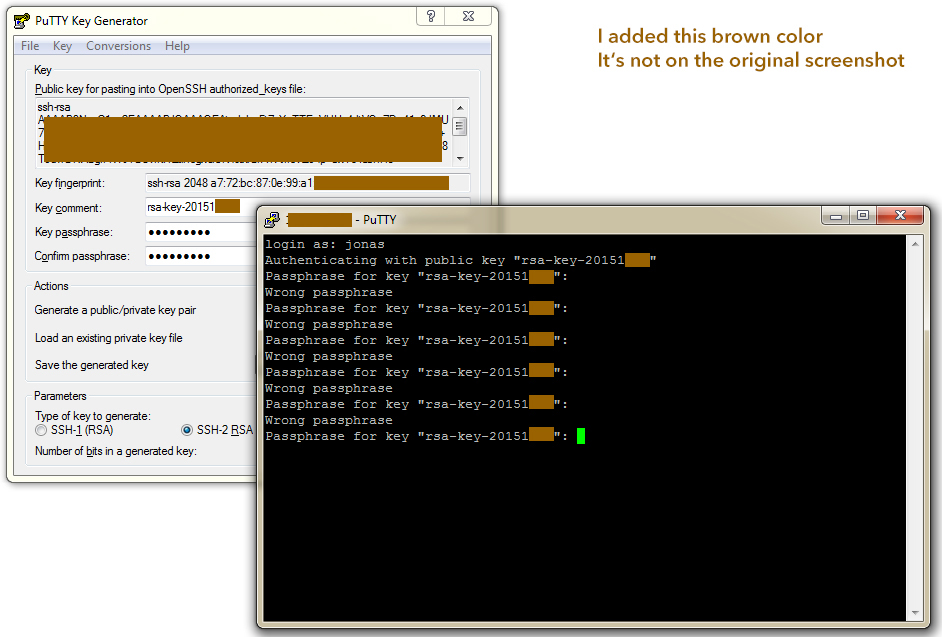 Characters outside the basic printable US-ASCII set aren't necessarily forbidden in passwords, but they're a bad idea because you can easily run into encoding issues. Take the character "Ü" (capital U with umlaut) -- in UTF-8 encoding that's C3 9C (hexidecimal)... or it might be encoded as a plain "U" plus a combining umlaut (hex 55 CC 88), or in ISO 8859-1 (hex DC) or in CP437 (hex 9A) or ...

If different programs use different encodings, you can type the "same" password into them and get two (or more) different encodings, and hence they're not the same as far as the password/passphrase/etc-checking system is concerned. In your case it sounds like this is just the passphrase to decode your private key, so it's just a question of whether ssh and PuTTY use the same encoding -- if it was actually the password for the remote system, then you'd also have to worry about various programs trying to translate it for "compatibility" and possibly messing things up in even weirder ways.

Not the answer you're looking for? Browse other questions tagged ubuntu ssh putty or ask your own question.

0
SSH onto Ubuntu box using RSA keys
4
Why does ssh login with same keypair work for one account but not the other on the same machine?
1
SSH rsa key works with external IP not internal IP
6
How to use SSH Public Key with PuTTY to connect to a Linux machine
2
Can't ssh in with public key
0
Where do i need to put my public rsa key on the server to allow passwordless ssh authentication?
0
Vagrant ssh : Puttygen can't generate ssh-2rsa key in Windows